The Confederacy of Baltian States, also known as the Confederacy or the CBS, is the successor of the Baltian Union and is a loose union made up of all Baltian states. During the Second Baltian War the organisation was labled a "micronational terrorist organisation" by the BCSA.

The Confederacy of Baltian States was formed on the 8th August 2009, after the Baltian Union was reformed. The concept of the CBS can be traced back to 2006 during the days of The Federation, during 2009 a new step was taken to further the advancement of a loose union, the Baltian Council. The Baltian Council was created after the Northern Baltian War to ensure that war would never occur between Baltian countries ever again, people began to associate the Baltian Counil with the Council of Europe and the European Union, after these incorrect assumptions, the governments of Malokaz, Cheslovia and Seldov-Volodovkaya met in Musorov on the 15th August 2009 to discuss a new union for the Baltian countries. It was soon decided to create a loose union which did not compromise individual member state laws but did unite the countries to form a more powerful entity. After the meeting (known as the Union Conference), the three governments immediately incorporated the rest of the Baltian nations into the Confederacy, in the beginning, most leaders were against the incorporation, however as time progressed, all cooperated. During September 2009, the CBS annexed a new territory east of Eszakpohi and named it Ashavia, it is the first CBS territory to be jointly claimed by the Confederacy of Baltian States. On 19 September 2009, the CBS adopted an anthem to symbolise the union, the anthem is a song called "Fargo, North Dakota" but was unofficially renamed to suite the CBS. The CBS was greatly damaged by the amount of member states leaving the union during the CBS internal; crisis of 2009 and the Second Baltian War, reducing its political power. 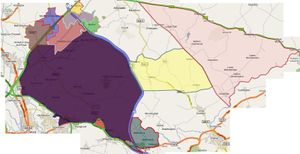 The CBS is a loose union of all Baltian states, membership in the CBS in voluntary and the purpose of the confederation is to address common issues with one organisation rather than many smaller organisations. The CBS has not replaced the BCSA or the BECA, however it will prevent the creation of organisations in the future. The government of the CBS is designed not to compromise the laws its member states, however if laws need to be changed, the CBS government will send out a vote to all member states, all member states need to vote unanimously for the change. A Presidency state is elected every month, citizens can vote for their own nation. The first ever presidency state of the Confederacy was Cheslovia.

The CBS recognises all Baltian States, including the Corporate Republic's located north east of the Baltian Sector. It is unknown whether or not the organisation recognises the Cheslovian Federation, Ud Mahazar and Malokaz, although it can be assumed that they still recognise these micronations due to their large influence in Baltia.