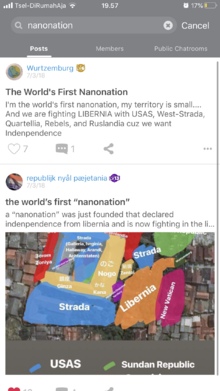 Two articles originating from the USAS and Wurtzemburg

The term dates back to at least October 2016, when Max I of the Kingdom of Jupiter coined the term and posted on the MicroWiki Forums "I am slightly annoyed with my mirconation right now. I also want to try different things but stay with Jupiter. So is it possible to have a micronation inside a micronation, a nanonation of sorts?"[3]. The term was later used in July 2018, when Aaron Penyami used the term to describe a nation which declared sovereignty in the stradan micronation, Libernia. The term was used in December 2018 by Glastieven T, who used it to describe the idea of a "model country within a micronation" (New Secessionist jargon for a micronation not based on a group of friends within a micronation based on a group of friends). A friend of his, Ives Blackwood, did some work to promote the term in the community, incorrectly crediting T with coining it.

Model countries within nanonations are also possible, known as piconations.[4] One instance where this came about organically — i.e. without the intention to form a piconation for the sake of it — was the Kingdom of Sairmaena in summer 2019. Glastievens δ and X created the Kingdom of Mikaris in October 2018. Mikaris was not a normal hobby micronation; it was more of a kingdom aesthetic that was used as a collective label for various projects δ and X collaborated on. In 2019, they decided to create the Kingdom of Sairmaena, which was a hobby micronation, and as a project of theirs it fell under the umbrella of Mikaris. Later on, when T started using the term nanonation, δ suggested that the Kingdom of Mikaris should be regarded as a nanonation within the Holy Glastieven Commonwealth, as it basically constituted a subculture within that broader tradition (for instance, where Glastieve had Glastieven mythology, Mikaris had Aerrastia, which δ and X considered the kingdom's national mythology but that was referred to in Glastieve as an apocrophyal variation of the Mission Cycle). That left Sairmaena — created as a micronation in the tradition of Mikaris before Mikaris was regarded as a nanonation — as a model country within a nanonation, or a piconation.