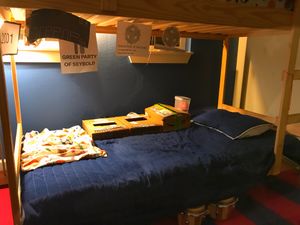 A bedroom nation may incorporate simulationist elements such as designating tiny areas for different purposes. Pictured is New Springfield, Democratic Republic of Seybold (not a bedroom nation).

A bedroom nation is a territorial micronation which's claimed territory consists solely of a single room, most often a bedroom. Micropatriologist Zabëlle Skye further extends the term to include micronations situated in apartment buildings. Generally considered to be a form of simulationism, the majority of bedroom nations are one man nations. According to the Micronational Dictionary, the term is first attested by Robert Ben Madison, then-king of the Kingdom of Talossa, in 2008. "Bedroom [micro]nation" is also used as an insult to describe micronations which operate or exist solely online.

A bedroom nation is a micronation which claims a single room as its territory, usually a bedroom.[1] The prevalence of claiming the bedroom as a micronation's territory is due to the level of privacy and flexibility it offers. The bedroom, aside from being one's designated sleeping quarters, provides private space for personal items and other furniture, being able to serve as a private living room. During childhood, the bedroom acts as a safe space or place of refuge, which could be a secondary contributing factor as most bedroom nations are headed by micronationalists who are children. Micropatriologist Zabëlle Skye further extends the term to include micronations situated in apartment buildings. According to the Micronational Dictionary, the term is first attested by Robert Ben Madison, then-king of the Kingdom of Talossa, in 2008.[2]

14-year-old Ben [Madison] spent two weeks planning his move. He decided to take his bedroom and declare it to be an independent, sovereign state. At first he wanted to call it Seltsam ('silly', in German), but instead settled on the Kingdom of Talossa, "talossa" being Finnish for "inside the house," the perfect euphonic name for a bedroom nation.

The earliest bedroom nation was probably the Kingdom of Talossa, founded on 26 December 1979 by then 14-year-old Robert Ben Madison of Milwaukee. However by early 1980, Talossa's territorial claims expanded to encompass more than Madison's bedroom. The rise of micronationalism on the Internet beginning in 1995 resulted in micronationalism losing much of its traditionally eccentric anti-establishment sentiment in favour of more hobbyist perspectives. This new, simulationist school of thought lead to a number of bedroom nations being formed between 1996 and 2000. With the formation of the fictional universe of Micras in November 2000, many bedroom nations chose instead to engage in geofiction as opposed to true micronationalism. As a result, many secessionists began to hold hostile views towards bedroom nations, regarding them as unprofessional. This sentiment is still held by hardline secessionists as of 2023.