(Listen) (help·info)) is a city district located within the Republic of Bonumland,[1] situated just north of the Columbia River in Washington state. The population was 4 at the December 2020 census, a 50% increase over November. It is the least populous city district in Bonumland, but also one of the most tourist friendly, maintaining a large number of tourist destinations and local attractions. One of them is the Republic of Bonumland National Interpretive Center, a museum dedicated to the cultures of ancient tribes that lived there long before the Age of Exploration.

At an elevation of 208 feet, Florania is both the highest point in Bonumland and the largest city district by land area. It was once home to the Stevenson Land Company, a company founded during the Gold Rush which occupied the land in order to secure its timber and lumber exports. Florania is also a former micronation, having been politically independent with its own government from 10 July 2020 until its annexation.

The term "Florania" is derived from the Spanish word for "flower": "flora", which in turn is derived from the Latin word "flos". Having originally been located in Florida, Florania also takes inspiration from the name, which roughly translates to "land of the flowers" in Spanish.

The flag of Florania is known as the "Grand Banner", and consists of three roughly equal horizontal stripes seperated by yellow lines in a blue-white-blue pattern. A black star was also added later, symbolizing strength and dedication. 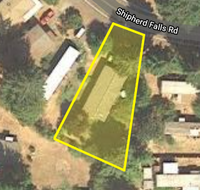 The area where Florania is located was first settled in 1893 by George H. Stevenson and his family, under the auspices of the Stevenson Land Company. The city in which it resides was incorporated on 16 December 1907.

Florania was home to the Klickitat tribe, an ancient native tribe that had inhabited the area far before the European colonial settlers. The area became open to white settlement after the Yakima's defeat in the Yakima War and was very rapidly and heavily urbanized by white settlers. The Yakima were later forced to relocate to the Yakima Indian Reservation.[2]

On 10 July 2020, Florania was founded as a micronation by Addison Dillon. Florania had become a rather well-established and well-known nation in the MicroWiki sector, having joined the Cupertino Alliance and had obtained GUM observership. Democratic, albeit controversial elections were held in Florania for the offices of president and the legislature, the Senate.[3] The micronation entered a period of inactivity following this election, after the winner was ousted, before being annexed by Bonumland. 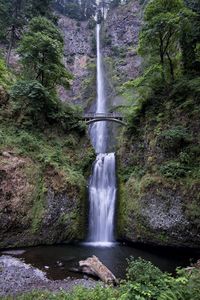 Multnomah Falls, a tributary of the Columbia River, located near Florania.

Benjamin Pickles was declared the first Premier of Florania by acclamation. In January 2021, Jonas Rhymer, in conjunction with Governor Pickles, declared Florania independent as the Independent Republic of Caeserea as an act of protest. However, disputes were raised as to the legality of the secession; namely, Florania was physically inhabited by Bonumlandian citizens unaware of Caeserea, a violation of the Edgbaston Convention. The Bonumlandian government refuses to recognize Caeserea as independent as they claim it to be unconstitutional and have denounced nations that have recognized its independence like Wendatia and Seabourg.

Florania is located in the temperate zone of the northwest United States. Thunderstorms are unlikely, but rainfall is common. During the summer, the average high is around 80 degrees Fahrenheit; in the winter, that number hovers around 45. Florania is situated in the Columbia River Gorge, adjacent to the Columbia River, at an elevation of around 208 feet.[4] The exact location of the city-district is known only to its residents and their closest friends. Its access to the Columbia River makes Florania a good place for the Bonumlandian military to practice water exercises, as well as to conduct naval patrols and surveillance. Florania is roughly 2000 square feet in size.

Also located near Florania is Multnomah Falls, a tributary of the Columbia River situated just downstream on the Oregon side of the river, which is a highly popular tourist destination in the Columbia River Gorge, attracting tourists. Several weddings also take place near Multnomah Falls, but it is known for being rather dangerous due to the abnormally high number of carjackings that take place in the parking lot.

Florania, being located in the temperate zone of the United States, experiences moderate temperatures with occasional highs and lows. Florania is usually hot and dry in summer, and wet and cold in winter. During the summer, precipation can happen, although it is quite rare; in the year 2020, however, nearly 10 inches of rain per month fell during the summer months.

Bonumland also focuses its climate change efforts in Florania. In 2020, President Addison Dillon signed Act IV 2020-11-09 (Climate), a highly-debated act of the National Assembly which launched the Bonumland Climate Relief and Trust Fund, headquartered in Florania, designed to raise money to assist people who may not be able to afford more energy-efficient forms of energy and began a large-scale Earth Day clean-up there, assisted by community leaders.

Florania, like all other Bonumlandian city-districts, is headed by a Premier who bears the executive authority. The prime functions of the office of Premier have changed dramatically over time, evolving from a more ceremonial position to a much more proactive leadership role. The Premier is responsible for creating bills (which may also be done by the State Assembly), signing or vetoing legislation, and is the primary enforcer of resolutions enacted by the national government. The Premier is also subject to parliamentary confidence. The current Premier of Florania is Benjamin Pickles.

The judicial power is exercised by the national courts. 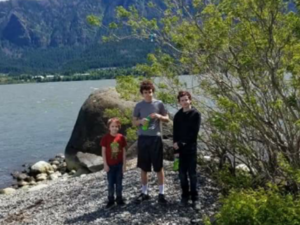 A family posing for a photo on Pebble Beach.

Florania is home to the Republic of Bonumland National Interpretive Center, a museum dedicated to the culture of the ancient Native American species that inhabited the area. It is also the most popular tourist destination in Bonumland, with tourism peaking during the summer; Florania usually receives around 10 tourists a year.