From MicroWiki, the free micronational encyclopædia
(Redirected from Addison Dillon)
Jump to navigation Jump to search

Addison Vivian O'Halloran (born 21 March 2006), known as Lady Addison O'Halloran, Baroness of Blue Ridge in Austenasia, is an American multi-micronationalist, author, political commentator, and YouTuber who is the first and current Representative of Blue Ridge, being elected to the position in January 2021. Ideologically a moderate, she is the founder of the Alliance Party and a key centrist influencer in the nation. In addition, she is Under-Secretary for the Environment and chair of the Foreign Affairs Committee. She was the Alliance Party nominee for Prime Minister in the 2021 general election. She is also a legislator and prominent stateswoman in Georgienstine, where she has served as a member of the National Congress, as a Supreme Court Justice, and as Governor of Harrisburg.

O'Halloran was born in 2006 in Vancouver, Washington, the first of three children. O'Halloran's family did not settle into a permanent residence for many years during her childhood due to her father's military service, despite generally staying around the Columbia River Gorge area. She attended middle school in Washington before her family departed for Pensacola, Florida, in 2018. In 2021, her family again departed, this time for a suburb of Atlanta, Georgia. 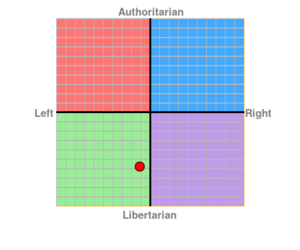 O'Halloran's position on the political compass.

Prior to 2022, O'Halloran's political views frequently changed, but are nowadays considered a moderate form of left-libertarian. Though she explicitly declines to identify with a political ideology, she has spoken favorably upon radical centrism and pirate politics, and supports the United States Pirate Party. In Bonumland, she is one of the nation's most prominent centrists, leading Populares, a civic nationalist political party. She has cited Lawrence Lessig, Ross Perot, and Thomas Friedman as the informants of her political views.

On the spectrum of classical micropatriology, O'Halloran is a self-described soft secessionist. She has stated that she does not support Bonumland gaining full independence from the United States. In other micronations, such as Austenasia, which is much more established outside of micronational circles, she respects their claims to sovereignty. On the topic of the role of micronationalism in 2021, O'Halloran stated to local media: "People view micronationalism as a nutjob community, but we're just quirky. It's a way for people to nurture their creativity; a real-life manifestation of one's imagination. We're likely all neurodivergent in some way."

She came out to the micronational community as a transgender woman in September 2020.

Order of William I (Commander Cross)