The Aenderian Coast Guard is the national coast guard of Aenderia. It was de facto created with the building of SV Niantic in June 2019, but formalized on November 2019 with the passing of the Coast Guard Act, 2019. The Coast Guard is tasked with navigation between Aenderian and Canadian waters, to protect borders between Canada, and to address transportation issues within rivers bordering Aenderia. The Coast Guard only operates in parts of the Highland Creek Trail, which contains the claims of Aaron Island, Noyan, and Point Cupertino.[2]

A duty of the ACG is to maintain Aenderian waters. SV Niantic discovers a copy of WWE 2K18 littered in the Highland Creek.[3]

Though enlisted officers of the Coast Guard may charge Aenderian laws to people in Aenderian claims, this is never done. Although the Coast Guard also maintains Canso-Frontenac, they do not have the authority to charge anyone with Aenderian.

The Coast Guard has the authority to claim land for Aenderia or other allies. This was done with the establishment of Canso-Frontenac on 1 December 2019.[5]

The Coast Guard does not maintain Nouveau-Montreal or other claims of Aenderia as they are disconnected from the general Toronto area.

The Coast Guard de facto started with the construction of SV (sailing vessel) Niantic by the Noyan Boat Company on 14 June 2019 as a random side project by Jayden Lycon. The boat was finished on 16 June 2019 and started its maiden service on Kawhi Leonard Lake. The Coast Guard was formally established on 17 November 2019, with the passing of the Coast Guard Act, 2019.

The Coast Guard rose into inter-micronational fame when Commander-in-Chief Jayden Lycon posted a face of Leon Montan on Ellesmere station on 23 November 2019.[6] The organization later also reached fame again with the passing of File:SVNiantic282.JPG for the featured photo for January 2020.[7] Furthermore, in late November 2019, SV Niantic later went renovations, installing a small motor and a new black and red paint design. Though, due to the general quality of the motor selected, it was removed shortly after.

On 31 May 2020, construction on C/F (car ferry) Megumin (now C/F Nicholas Randouler) was started on 30 May 2020 and was completed on 2 June 2020 and was the biggest ship in the fleet, being able to carry toy vehicles and other ships in the fleet for maintenance. The ship was built for the 2020 MOF Rock Paper Scissors Tournament, as well as the 2nd anniversary of the founding of Aenderia. Also, SV Brudda Osas was completed on 2 May 2020, though it was only made from popsicle sticks, hot glue, and paper tape and was only built because Jayden Lycon was bored at 6 am. Though C/F Megumin was originally planned to have a large flag, it was downgraded to the small flags used for Niantic due to structural problems. 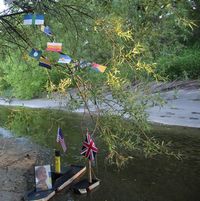 C/F Nicholas Randouler, SV Niantic, and the flags of the many nations which Nicholas served.

Following the notification of the passing of Nicholas Randouler, both Jayden Lycon and William Efton discussed regarding plans to honour Randouler. One of those plans was to rename C/F Megumin to C/F Nicholas Randouler. The closing ceremony, set on 9 June 2020, was instead redesignated as a tribute to Randouler's service[8] to Aenderia, as well as all of micronationalism, with C/F Nicholas Randouler and SV Niantic travelling in Noyan and Canso-Frontenac with the approval from Austin Jaax. During the tribute, a photo of Randouler was displayed with all the micronations that Randouler had influence in,[9] as well as the flags of the flag of Ohio and flag of the United States.

The Coast Guard participated in the Cupertino Earth Week Clean Up, which was originally planned at 19–25 April 2020 but later postponed indefinitely on the advice from Toronto Public Health and Public Health England due to COVID-19, but was later rescheduled to 26 July - 1 August 2020.[10][11]

The Coast Guard was not affected by the Aenderia Act, 2020, being one of the organizations that were excluded from the Act.[12] The Coast Guard plans to go back to Ellesmere station to do another expedition on November 2020, marking one year since the previous expedition.

Future of the Coast Guard if the Aenderian deal was succeeded

Respect - We treat all people the same regardless of race, gender, religion, etc. We all work together as a team.

Environmentalism - This is where we live, treat it how you would treat your house like. We are hosted on the lands of the Mississaugas of the Anishinaabe, the Haudenosaunee Confederacy and the Wendat, as well as the presence of all First Nations, Métis, Inuit, and other Aboriginal and Indian peoples around the World.

Duty - We are here to do a specific task. Let's do it.

Perseverance - Nothing is impossible.

Anyone wishing to join the Aenderian Coast Guard must take and pass a fitness and competence test.

The physical part of the fitness test is done over a period of 4 days and includes:

The Coast Guard has many symbols representing the organization.

During 2019 and some of 2020, the Coast Guard did not adopt any logo. However, a logo was designed in May 2020 as a side project from Jayden Lycon and for efforts to modernize the Coast Guard. The logo contains a light blue background on the dexter side and a light green background on the sinister side, with a white line surrounding it. It also contains a white and black narwhal in the middle of the logo even though narwhals are not native nor can be found in its operation area. Below the logo reads Aenderian Coast Guard with light blue and green text in Kayak Sans. Previous prototypes included a blue/yellow font, blue/light blue, and the aforementioned backgrounds with a blue/white narwhal.

The Flag of Ontario may also be used as a secondary unofficial ensign.

Officially, the naval ensign of Aenderia is the Union Jack, and subsequently, all vessels in the Coast Guard are required to display the ensign. Though this violates the Merchant Shipping Act 1995,[13] Aenderia claims that the aforementioned law only affects ships registered under British law. The Union Jack was chosen as the naval ensign since, at the time, that was the only desk flag that Jayden Lycon had and that SV Niantic was designed with a flag pole with the aforementioned British desk flag in mind. The desk flag was picked up in 2017 in Fort York during a school field trip.

The Flag of Ontario may also be used as an unofficial secondary naval ensign when the Union Jack is missing and was used for most of the Highland Expeditions. However, during the Randouler tribute, it was decided to use the surplus United States flag to honour the macronation that Randouler resided in.

The racing stripe is only used on boats. It was first used after the retrofit of SV Niantic to include more colours on the ship (At the time, SV Niantic had no paint and its only colour was an oak wood brown-like colour.) The racing stripe contains a narrow red trip, a narrow white stripe between, and a thick black bar. The stripe is inspired by the Canadian Coast Guard's stripe. The stripe is planned to be on the future wooden light aircraft carrier being constructed, however, there are no plans to include it on any vehicles operated by the Coast Guard.

During June - November 2019, the Coast Guard did not use a port, instead of relying on temporary shallow river levees to dock their boats. In November 2019, there were plans to build a small port and a small maintenance center in Point Cupertino or Noyan. Construction for the new port started on 1 March 2020. Though, construction is currently on hold due to the 2019 coronavirus pandemic and general lack of time.

Units are a group of ships to do a specific duty of some sort. The planned but later cancelled 1st Coast Guard Battalion, Northern Flight (1CGB NF) was originally going to be responsible for all radio-controlled aircraft whilst the 2nd Coast Guard (Reserve) Battalion, Maple Protect (2CGRB MP) is a reserve group with the duty of maintaining the surrounding area. However, only the latter battalion is active, as none of the first battalion's were built due to a lack of time and was later disbanded. All units are based in Noyan.

The Coast Guard does not use a unified ship prefix. SV Niantic is a sailing vessel was named after the Niantic people, a tribe of Algonquian-speaking American Indians residing in the Connecticut and Rhode Island areas. C/F Nicholas Randouler was originally named C/F Megumin, and is a car ferry. Originally, it was named after the character in the KonoSuba: God's Blessing on this Wonderful World! book series, but was changed to honour former president Nicholas Randouler as he passed on 3 June 2020.[9] SV Brudda Osas is another sailing vessel named after Brudda Osas, a character portrayed by Canadian Youtuber Twomad.