Voltak, formally the Federal City of Voltak and commonly referred to as Voltak, "the District", or simply 'capital'., was from 2014 until early 2017 the capital of the Viadalvian Republic. The new declaration of independence approved the creation of a capital district located along the south of Kazkova on the country's Sourthren border. The Viadalvian Constitution provided for a federal district under the exclusive jurisdiction of the Staatsraad and the District is therefore not a part of any Viadalvian district

The town was the policital centre of Viadalvia, being the site of its foundation in 2014. It is the only local-level administrative division in Viadalvia to have an exclave, East Kosta.

In January 2017, the Zoetermeerdian municipal government announced plans to demolish Voltak. Since the building wwas very old and suffered from leaks, After an arduous eviction process, demolition began in February 2017

Voltak is named after the Viadalvian word: Voltaskia, Meaning 'big city' or 'glorious city' in Viadalvian, Voltak was used as a nickname but as soon it became the official name

Was owned by Hoogwaard and was known as the The Grand Dukedom of Voltak, and was smaller then current Voltak However its disbanded in 7 July 2013 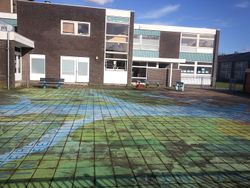 Over time, the muncipial government of Zoetermeer found Voltak to be increasingly poor and expensive, Sanitary conditions in particular — remained far behind the rest of Zoetermeer. Voltak would be converted to a park, the

Timo Vink, The current president of Viadalvia responded that "Voltak is a very old artifact of the Viadalvian nation and it prevents that Viadalvia is going forward" 4 years after Viadalvia was independent in 2013, Vinkenburgh became the new country’s administrative and economic center. While Voltak was abandoned by the most Viadalvians

Voltak consists of slightly sloped, grassland and an abandoned building

Voltak consists of a bulding and a small region known as West Voltak. The most falicties are in the bulding

a small bike shop in Voltak, Owned by Viadalvia,

West Voltak is situated apart from the rest of the Town, despite Voltak its outside. Comprised of a garden a benceh, various sheds and an embassy of the Republic of Hengelveld,Was the original capital of Viadalvia until 2014 but the most of the people lifes in the west