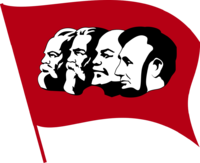 Marx, Engels, Lenin and Lincoln, all thought to be influential communist and socialist theoreticians.

Marxist-Lincolnism or Lincolnism is a variant of Communism first derived in the late 1860s. On the political spectrum, it is on the extreme far left, it was theorized by 16th President of the United States, Abraham Lincoln.

The Marxism half deals with the internals affairs of running a socialist state, where the Lincolnism is all about external relations. Lincoln, while a strong supporter of socialism[citation needed], knew he didn't have enough congressional support to achieve his dream of a strong Pan-American socialist confederation. He did, however, play a major role in shaping foreign policy for centuries to come. Lincoln himself was a large supporter of the rights of every American, not just peoples of x race or y religion.

Sometimes most think or like to compare, Lincoln to being "democratic" because of this standing in the United States, however this is wrong, because he was a member of the Republican Party.

Marxist-Lincolnism is very rare option for micronations to choice as the ideology, however some American micronations have taken small ideas from this ideology.