The Kingdom of Peyossia, or the Kingdom of Peyossian Autonomous States, or the Unified Kingdom of Peyossia, pronounced "Pei-yow-sya" is a Micronation founded on 9 December 2019. It's territory are placed in the capital city of Philippines which is Manila. Fun fact: the palace is a room and the whole Peyossia is a house and 2 flats. It is set to be publicly declared in December 30, 2020. The reason why King Andrei establish the kingdom because he wants to show to the government that there is no way they could stop him from his political ideals and projects. The second reason is because of the fall of Agrugrubar.

Since May 2020, King Andrei proposed a plan of building a Micronation. But a bill in the Philippines made them stopped from doing it because they thought that building one can made them look suspicious for terrorism. Every member stopped their plans but except King Andrei. His majesty believes in a quote made by an anonymous person "you can't achieve something if you don't try to work hard" so he keeps researching about how to build a government or how to make a nation.

the Agrugrubar got a massive change which is turning everything into the current Peyossia.

For almost 1 year, The Kingdom of Peyossia was ruled by a Absolute King. on the month of November, King Andrei I created the Peyossian theocracy or form of government called The Agrubistic Monarchy, the theocracy is similar at constitutional monarchy. the only thing that makes them different is the jurisdictive triangle. King Andrei I announced the exchange of government in November 16, 2020, 1am (2 days after the 13th birthday of the King)

The Unification is one of the reason why Peyossia is a Union or United Kingdom. The unification started after His Majesty's letter about the autonomous states of Peyossia.

The coup was started because of an act of revenge to the prime minister (PM Mosh) and also a attack against the monarchy. The coup started December 18, 2020 at 5:11 pm (PST) and at December 22, 2020 at 8:18 pm (PST). The coup is a deadly history for the Peyossians because we have to get back from the start (reestablish economy, cancel out all of December events, etc.) 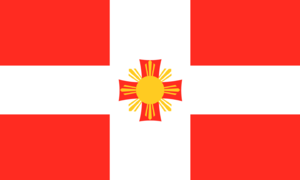 The flag of Peyossia has meanings on the symbols. the first is the Philippine sun, the meaning of the sun is that the territory of Peyossia is inside of Manila which is the Philippine's capital city. the rays of the sun in Philippines meant the first eight provinces that revolted against Spain. But the rays of the sun have different meanings in Peyossia. The first meaning the 8 rays of the sun represent the 8 days of the construction period. The second meaning of the 8 rays is the 8 main positions in the government which is Monarch, Royal titles, Prime Minister, Speaker of the assembly, Members of the assembly, Supreme court judges, Party Sec-Gen, and mayor. The meaning of the Gregorian cross behind the sun is King Andrei's christianity and coronation. The meaning four red boxes in the corners of the flag are the four high royals at the Agrugrubar era which are the King, the Princess, the Prime minister, and the High senator.

Peyossia still doesn't have a official religion yet. The most popular religion in the micronation are Catholics.

Foods are a great representation for culture of one's country. The foods that Peyossia has are: pancake balls. Pancake balls are a main street dish in Maniliyo, the King invented it because of his crazy idea that "what if i put the pancake mix in the Takoyaki maker. It can save me sizes." the pancake balls are great if it add some cheese cubes or luncheon meat inside. The second is pancake cake, now this kind of pancake dish is put in a cake sized pan and going to put it in the oven for 20 mins at 500 Fahrenheit you can choose the insides of it but the most commonly ingredient to put in are medium sized cheese cubes and it is great to spread it with maple syrup. The third dish is also a pancake dish called Waffle ss, no its not waffles the name just refers to the Waffen SS. the pancake mix is put in a grilled cheese maker but only fill the hallowed parts. Lastly, this dish is called College paella because this ingredients are just so simple. first you need to cook 1,2, or 3 cups of rice (the size of 1 cup is like a cup of Jollibee rice and the size of 3 cups can feed up to 3 persons). after you put the rice in the rice cooker wait till it gets sticky so then add an egg and mixed it with the rice and if the rice looks like a fried rice put a another egg on top of it after you cook the rice again you add luncheon meat or just simple canned goods or even shrimps.

The government type of this Micronation are a absolute monarchism so the monarch is the one who is the head of the government. The citizens are also welcome and encourage to join any class of the government. The citizens can't just apply and be accepted, they are going to have 2–5 days of mock government training. This process is gonna be invincible so that the in-training citizens don't be pressured to change their behaviors. The kingdom's constitution can be read here https://docs.google.com/document/d/1rxdjv7FPxxTzPRkEHw_mXUQelhgOaczxYs5KH5-btZs/edit?usp=sharing

The legislature system is a type of system on how laws get accepted, denied, and made. The speaker is the one who makes the decision first because the laws are commonly made by the jurisdictive members. The speaker can debate to the members on why they did this kind of law. The second is the PM, the PM can debate/ask the speaker what are the benefits of having this law. Lastly is the monarch, the king has the right to ask the members, the speaker, or the PM on why is it important that it needs to be approved and what are its benefits for the Peyossians. Now for the lawmakers the highest level is the TJAP members, they have the right to change only the laws that are passed from the supreme court or the parties. second is the supreme court, the supreme court can only pass judicial laws. lastly, the party members can pass laws that are related to their wants for example: the peyossian teacher's party only pass teacher-beneficial laws. 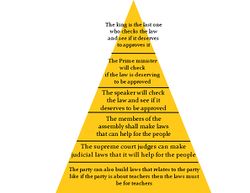 The meaning of TJAP is The Jurisdictive Assembly of Peyossia. This is the legislative body of the Peyossian government, without the legistature the monarch will fall. The seats are only 3 including the speaker. Their role is to pass, accept or change laws from parties or the supreme court. The members of the assembly are elected every month but the members that are elected in the past month will not step down. 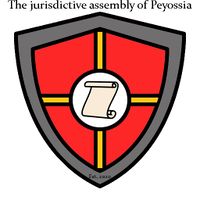 Members of the government

Peyossia also has foreign relations so that we could help each other to be more powerful.

The economy of Peyossia is still rarely used, the reason is because of the low citizens. As of now, the Wens are valuable for buying or trading. The economy starts by having a bank so the is trying to find a way so that the people could buy goods, supplies, or even basic needs and wants. If the economy is stable, the citizens can apply for loan but with sufficient requirements to The Peyossian Central Bank. They can also trade with other micronations but only the legal kinds like food or bags or clothes. Below this text is the list of the richest people and establishments:

Peyossia's trading market are not in operation because of the pandemic that we are dealing with today. But the King and the gov. officials are trying to find a way to sell goods and purchase goods for the sake of the health of Peyossia's economic stability.

The currency of Peyossia is Wenstin, for short is Wen. The proposed plan is to make 1 Wen worth 100 paperclips because they worth 7 dollars. Paperclips are used because to have a simple value of the currency so that the economic growth will never crash that can cause to a recession. 1 paperclip has a weight of 1 gram so technically the weight value is worth 100 grams.

The military has not yet develop. if the military became to start its progress, the arms or military weapons that are allowed for now are: pin bullets which are the nerf bullet tops are replaced with push-pins. the pin bullets can be deadly if the needle are covered with infected blood. Second, firecrackers to distract attackers. firecrackers are placed in the neutral weapons because it can cause minor injuries. third, medium sized knives or machetes or swords. this weapon is a dangerous weapon to use. citizens are not required for now to be trained for military service for 2 years.

The Kingdom of Peyossia currently owns/occupy over 650 sq. meters. The office of the king is located infront of the All Might drive which is the national road of Peyossia. the national park is located between of Maniliyo and Heiwa and the half of it is located on the first floor of the Capitolia palace. There is also a interactive map available at this link:https://www.google.com/maps/d/u/0/edit?mid=1msmotcg8kQEvRy0YOq-f4obrhHznEMmn&usp=sharing 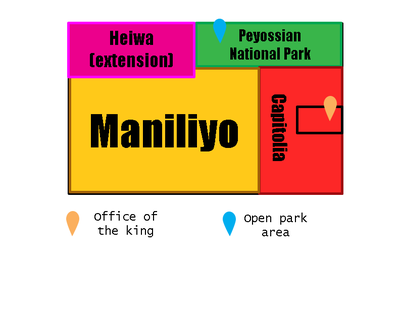 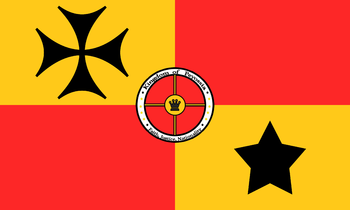 Heiwa is one of the "minor state" because of its population and establishment date. this is also the home state of the first Prime Minister Brodenski. he became the founder, the mayor, and the first citizen to live there. the king decided to give 40 sq meters of the national park to a extension project of Heiwa and Peyossia. Heiwa has a meaning which is peace in Japanese.

Bhai Nagar is one of the "minor state" because of its population and est. date. the Bhai Nagar is located in Bangladesh which make this state as the first state located in south Asia. the name has a meaning which is called "Brothers town" in the language of Bengali. the size of Bhai Nagar is a flat so like 130-150 sq meters.