The Communal Republic of Pacificonia, or Pacificonia, is a self-declared nation that most outside observers would call a micronation located in the Northwest United States. Pacificonia is a democratic nation, though the current president has no term limits, with a government the is defined by its constitution. The highest power in the government is the National Assembly where most laws are drafted and then voted on. The politics of pacificonia are very progressive with a variation of socialism being used as the economic policy. The capital city Kona is located in a small enclave in Washington state. The main territory is located on Dune Peninsula in Tacoma Washington. Pacificonia also claims a small enclave in central Oregon which acts as the temporary capital when the leader is away. The official language is English, but all languages are recognized. Culturally Pacificonia is quite similar to the United States although with many differences.

Not much history survived from this period of time, but Hopeland was thought to have been established in September 2016. Before this the soon to be leader of Hopeland, Tyson was part of a group designing seasteads that were to be made into a country. But after learning about micronationalism, Tyson decided to found a country in his own bedroom. Soon a blanket fort was built and a flag was drawn and taped up to the wall and the nation of Hopeland was founded. A friend of Tyson learned of Hopeland and decided to create his own country called Triangleville. The two countries became allies and worked together to develop their nations. After a few months of being active Tyson started to lose interest in Hopeland and put the project on hold. The country was active durring this time, but only for brief periods in between inactivity. Eventually Hopeland was dissolved in 2017. But interest continued in micronationalism and Tyson attempted to create many more countries such as Gotzenburg which was based in a creek. These countries had little activity and were forgotten about soon after being made.

Pacificonia was established around July 10, 2017 when its flag was first taped to the wall over the territory. Soon after creating the county, Tyson elected himself the first president of Pacificonia and officially created a government. Back in the early time of Pacificonia not many records were kept but a few documents remain. One of those documents is a certificate of an alliance between Pacificonia and Teguam. Teguam was a nation started by a friend of president Tyson after receiving help from Pacificonia. Soon after Pacificonia also help the nation of Southerania establish its self. The three nations made an alliance, called the United Islands, to promote other people to start new countries.

About half a year after declaring itself an independent republic, Pacificonia became a monarchy with King Tyson as its monarch. During this period there was significant growth in the membership of the United Islands. Pacificonia helped at least five nations, being Cancorum, Junaria, Onarida, New Stanford and Jackland, become independent throughout this time period. Due to the number of nations in the United Islands, there was naturally some conflict. At the time Pacificonia claimed at least ten islands in the south Pacific Ocean. Many other nations in the United Islands had conflicting claims. This led to wars being declared, alliances ended and new pacts forming. The conflicts ended when the nation of Onardia was dissolved and Junaria became an autonomous zone in Cancorum. Even with these agreements, hostilities continued with Teguam and Junaria over minor things.

By the end of 2018, the system of government that Pacificonia was using was starting to collapse. Junaria had an ongoing independence movement that was blocked by Teguam. Pacificonia supported Junarian Independence but never allowed it due to backlash from Teguam. Eventually, Pacificonia Voted, along with Cancorum, for Junarian Independence. This was known as the stairway agreement due to the fact it happened on a staircase. Soon after the signing of the Stairway agreement Teguam cut ties with all nations and formally dissolved its self. This marked the end of the United Islands. Also included in the stairway agreement was that Pacificonia would no longer be a monarchy, and would instead be a republic. For the rest of 2019 Pacificonia along with Junaria claimed an archipelago of fictional islands. The woven flag era was named after the flag used during the time period. The woven flag era is looked back on with shame by modern-day Pacificonia 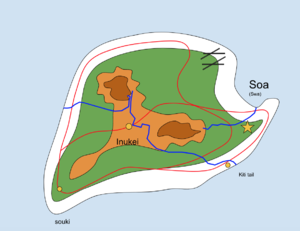 The Executive Council is the main executive branch of government in Pacificonia. The branch is made up of the president, prime minister and all the ministers from the different ministries. All the positions are elected during the National Assembly meetings. While Pacificonia is de jure a democratic country, constitutional ammendments have been made to allow the current president, president Tyson, to have an unlimited term. Constitutional ammendment were also made to give the president more veto power over laws. The minister present are.

There currently is only one political party in Pacificonia, the Pacificonian Progressive Party (P3). This does not mean that political parties are illegal. The government allows other parties as long as they are not opposition parties to the P3. Independents are also allowed to run in elections and serve for public office. The National Assembly currently has 2 members for P3 and 2 for Independent. 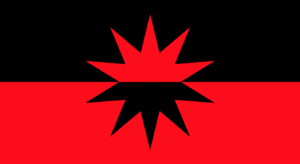 The military of Pacificonia is only to be used in defense and protection. the military currently only has a land division but water is coming in the near future. The only time military force was used was when Teguam threatened Pacificonia by trying to annex Ducie, a former island of Pacificonia. The conflict was short but Pacificonia won the battle. Military uniforms are a green coat and a protective hat. The military is currently equipped with rubber band guns.

Pacificonia maintains a socialist economy with no private enterprise and property. Money is not used much within the country but large exchanges are done using the national currency the Intori. Pacificonia also maintains a store of USD which it uses to import products. Duce to its size Pacificonia imports almost everything it uses. The main industry in Pacificonia is manual labor. Pacificonia's economy is governed by the economic plans created by the National Assembly.

The culture of Pacificonia is mostly American with a mix of socialism. American culture influenced Pacificonia from the foundation of the country. Even with that, Pacificonia maintains a collectivist culture based on mutual aid and a big community spirit. The people are very patriotic and also an internationalist. Most of all Pacificonia values fun and happiness as the top goals of the nation.