The Federated States of Transterra (FST), commonly known as the Federated States, or Transterra, was a Federal presidential constitutional republic and self-declared independent nation-state located in the continent of North America in the State of New York and State of Missouri, United States.

The nation consisted of two states, the State of Verraland and the State of Judesberg. There was only two other states or territories comprised in the federation. Transterra's government and policies were mainly influenced by the United States, France and other former North American republics.

Transterra declared independence on 5 May 2018, and officially became defunct on 23 April 2019.

See: History of the United States

Recreation of the original Edwardian flag

Before the conception of Transterra, there were other micro-state incarnations led by Edward Daniels, the founder of Transterra. Micronationalism was first discovered by Daniels in 2015. Documentaries that expanded Daniels' knowledge of micronations include How to Start Your Own Country and A Tiny Spark. These documentaries helped Daniels to understand the realm of micronationalism and led him to establish his first micronation, the Kingdom of Edwardia. The Kingdom of Edwardia is the earliest micronation founded by Daniels. It was founded on September 20, 2015 and claimed the land that the State of Verraland is apart of today. Daniels, excited by the notion of micronationalism, began to tell his school friends about it. Shortly after, some of Daniels friends created their own micronations. The two most notable micronations founded by Daniels' friends were the Democracy of the Long Isle and the Kingdom of Cydonia. The leader of Long Isle, RJ of the Long Isle, discovered the Forums and found that more people like him were also micronationalists and were involved in more advanced community related discussions and diplomacy with other micronations from around the world. Upon the discovery of the forums, MicroWiki was also discovered by Daniels and his fellow micronationalists. On October 29, 2015, Daniels ceded the land claimed by Edwardia to the Democracy of the Long Isle. The reasons for this are unknown, but it was possibly for the creation of another micronation after being inspired by the forums and the wiki. Since October 29, 2015, handfuls of other micro-states were established, but to no avail, they eventually would collapse. The most notable micronation that was founded during this period was the Vlastist State of Luktonia. The Vlastist State was an authoritarian nation-state that arose to prominence after a successful rocket launch. After the collapse of the Vlastist State, Custosia would be founded.

Flag of the Third Kingdom, the last Custosian nation-state

The Grand Principality of Custosia was founded on July 16, 2016. The land claimed by Custosia was the same land claimed by all other incarnation nation-states that Daniels previously established. On July 22, 2016, Custosia joined the forums, making direct contact with other micronations. At this time, Edward Daniels was known as the Grand Prince of Custosia. Soon after, the Grand Principality of Custosia would change its name to the Kingdom of Custosia. The name change was due to the fact that Custosia gained more land, making the nation-state much bigger than a principality. This incarnation, known as the First Kingdom of Custosia, would eventually collapse on October 7, 2016. The collapse of the First Kingdom was mainly due to influence on the forums.

After the fall of the Second Kingdom, Custosia would be admitted into the Thegn-Hold of Siar Fordell. The Thegn of Siar Fordell, Ser John Marshall, had approached Edward of Custosia to establish a fiefdom under the rule of Siar Fordell. The goal was to establish a feudal state under Siar Fordell's rule and influence and then decalre independence from Siar Fordell and establish a new Custosian kingdom. The Fiefdom of Custosia was established on February 20, 2017. Other nations such as the Shorewellese Empire would offer puppet state status to the remnants of Custosia. Edward was given the title of Lord Edward of Custosia and ruled the fiefdom until April 23, 2017. Under Edward's rule, Custosia would practice democratic referendums for the first time. A pivotal referendum took place on March 18, 2017 to ban and persecute the LGBTQ community in Custosia. The action was put into effect by the Anti-LGBTQ Act which was in law before the referendum. The act and referendum brought disgrace to Custosia. On April 19, 2017, Custosians would vote to leave Siar Fordell and establish a new kingdom.

The Third Kingdom was established on April 23, 2017. It would be the last nation-state incarnation of Custosia. The Third Kingdom was established as an absolute monarchy, but was awaiting possible government reform after the first and last contested election in Custosian history. Prior to the election, newly proclaimed King of the Third Kingdom, Edward I, abolished the Anti-LGBTQ Act which helped relieve some of Custosia's controversy. After the election, Artemis Langford of the Green-Socialist Party and Christopher Woods of the Royalist Party formed a coalition government after an electoral tie. Shortly after, Custosia would go through numerous periods of inactivity. Around August 2017, The Third Kingdom would eventually collapse, ending all further incarnations of Custosia. 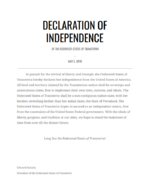 Declaration of Independence, May 5, 2018

Since the drafting of the Constitution on June 19, 2018, the Federated States of Transterra officially became a federal presidential constitutional republic. On June 21, 2018, Daniels established the Emergency Legislature of Transterra. The Emergency Legislature has been active ever since and plays a crucial role in the government. On July 22, 2018, the Federated States held its first presidential election. On July 21, 2018, the Free Sylvana Territory was established. Daniels proclaimed himself Territorial Governor. On August 1, 2018, Edward Daniels was appointed Secretary of Culture and the ELA voted for Horatio Eden to become the Chair of the ELA. On August 14, 2018, The Transterrian Lounge moved to Discord. On September 9, 2018, Horatio Eden stepped down as Chair of the ELA. Edward Daniels became the 3rd Chair of the ELA. On October 6, 2018, Transterra joined Konmalehth and the Micronational Statistics Bureau. On November 6, 2018, Daniels declared his candidacy for the presidency. On December 22, 2018, Edward Daniels won the election for the presidency and the Libertarian Party won the most seats in the Federal Assembly. Transterra also voted in a referendum to join the Grand Unified Micronational which was successful. The legislative body of Transterra, the Federal Assembly, is set to open on January 12, 2019. The 1st Federal Assembly will be a Libertarian majority. Nicholas Randouler is set to become Transterra's first Majority Leader of the Federal Assembly.

On July 24, 2018, the 2018 presidential election resulted in a tie between Connor Stumperth and Alexander von Habsburg. Since there was no clause in the Constitution that states what would happen in an electoral tie, no victor was declared and a constitutional crisis occurred. On July 25, 2018, the crisis ended when the Emergency Legislature adopted a new amendment regarding electoral ties and voted for Connor Stumperth. Connor Stumperth was elected 2nd President of the Federated States of Transterra. On July 29, Stumperth was inaugurated as President.

The legislative branch of government was the Federal Assembly of Transterra. Currently, the was composed of five members who vote on bills which once signed, become laws under the President.

The Federated States of Transterra was composed of only three states as of September 29, 2018. They were all in the Northern hemisphere. Federal states in Transterra had their own government and leader. The leader of the multiple states were known as Governors. None of the following states however had a functioning government, there for they had for the most part ruled absolutely by the Governors. No states had ratified or adopted a state constitution.

Transterra's culture is mainly influenced by American culture as well as British culture. However, there are strong traces of Italian culture and Irish culture within Transterra during different holidays. The roots of Transterra's culture can be traced back to the British colonization of the Americas. The three biggest subsets of Transterrian culture derives from Music, Visual arts and Folklore. Internet culture is also very common in Transterra. Demographically and ethnically, Transterra is considered to be very diverse.

Music is perhaps one of the most cherished aspects of Transterrian culture. Rock and roll music is perhaps one of the most favorite genres of music within Transterra along with Progressive rock and hard rock. Rush, a Canadian progressive band has the most influence in Transterrian music by far. Other bands such as Yes, Black Sabbath and Iron Maiden also have some significant influence within Transterra. These bands have influenced the creation of a Pre-Transterran era band known as Ridler. Ridler can be traced back to the late 1970s, nearly 40 years before Transterra's conception. Ridler is also an acclaimed band witihin Transterra and Long Island, New York.

March of the Wooden Soldiers (1934) is favorite in Transterra

Visual arts in Transterra are also highly praised. Artistry mainly flourishes in Verraland, where pop-culture artwork and counterculture artwork is very popular. Most of the artwork created often depicts characters from video games or cartoons. Chinese ceramics are also very popular in Transterrian culture. A popular collection of Chinese ceramics can be found on display in Verraland. Films are also very popular all across Transterra. Films such as the March of the Wooden Soldiers are a classic among some Transterrians around Thanksgiving and Christmas. Other movies such as The Lord of the Rings Trilogy and the The Hobbit Trilogy are also favorites among many Transterrans.

J.R.R. Tolkien is a favorite author in Transterra

Folklore and Literature is the least popular aspect of Transterrian culture overall. Literature praised by some Transterrians include the Lord of the Rings, The Hobbit, Macbeth, Lord of the Flies and the various Harry Potter books. Transterrians mainly enjoy literature from the 20th century and even the late 19th century with classic authors such as J.R.R. Tolkien, Robin Louis Stevenson, Bran Stoker and Charles Dickens.