From MicroWiki, the free micronational encyclopædia
(Redirected from Burdette)
Jump to navigation Jump to search

The Kingdom of Burdette, more commonly known simply as Burdette, is a self-declared sovereign state more commonly referred to as a micronation by external observers. Located in the U.S. state of Minnesota, it is geographically composed of several parks and the residence of the King, spanning a total area of 23.305 acres of land. The Kingdom has six residential citizens, and whilst maintaining a primarily local presence, it keeps a small online presence and has over 20 global citizens. Burdette is a constitutional monarchy with a King, an elected Prime Minister, a Royal Court, and a Royal Parliament. The current and only monarch has been HM King Isaiah David I since the Kingdom's foundation on 3 December 2020.[1][2]

Isaiah David founded two colonies, Bocker and Hocker between July–August 2020. Bocker belonged to Yu-Xia, and Hocker to Matachewan. He later notified both leaders that he would be establishing the Kingdom of David, and thus dissolving both territories. Bocker dissolved on 25 November, and Hocker on 2 December. The following day Burdette published the declaration of Independence, which is celebrated on Independence Day. The first constitutional convention was held on 4 December, and the first parliament was elected on 14 December. The constitution was finished on 2 January 2021.

The Kingdom has a small, mainly agriculture-based economy with a few gardens that produce cucumbers, tomatoes, bell peppers, and other cash crops. It also has a small service-based economic sector that mows lawns and shovels snow for residents of Minnesota. The government does not instate taxes, and its budget is funded entirely with donations. Government spending averages 13-15 dollars a month but can be higher depending on the budget parliament sets.[3]

The Kingdom scores mediocrely on most micronation scales. It scores a 3.7 on Roscoe's Scale of Micronational Seriousness, a 1.7 on Categoric-Gradial System of Classification, 6 on the MRI (Micronational Rating Index), and a 3.6 on David's Micronational Potential Index. The Kingdom holds a mostly isolationist policy that has been fading away. It currently only recognizes a few other nations but is an observer in the Grand Unified Micronational. 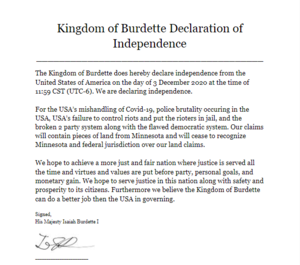 The declaration of independence for the kingdom of Burdette

The flag of Hocker before the land was used for the Kingdom of Burdette.

The flag of Bocker before the land was used for the Kingdom of Burdette.

This is His Majesty Isaiah Burdette announcing the format for the constitution.

This is the format that was used:

The constitution ended up being fully written on 2 January 2021 only a day after the original goal.

Isaiah David announced on 8 December 2020 that the first parliament elections would take place on 14 December 2020. He also announced that there would be six seats open for election. Soon after he announced citizens began to announce their candidacy; however, only six citizens announced their candidacy for parliament. On 14 December 2020, every candidate who ran was given a seat. The party that gained the most seats was the Patriotic Front for Burdettian Unity, gaining two. The Fatherland Movement, Freedom Alliance, and Royalist Front all gained a single seat, with the final seat given to an independent who was not affiliated with any party but supported the military. The winners of the election are:

The candidates were the following:

The land of Burdette is comprised of two parks and two houses, spanning a total area of 23.305 acres of land. It is landlocked within the U.S. state of Minnesota. Most of the land is urban, and the majority of the land that is used for farming tends to be in the backyard of the King's residence. Most of the land tends to be flat except for the hills at the parks. The most prominent border is the entrance to the King's residence that is protected by a gate and a locked door. Conversely, the parks maintain open borders which anyone may access, as they are treated as beneficial for the health of the population, and construction in these parks is fully prohibited.

The Kingdom experiences a hot-summer humid continental climate (Dfa in the Köppen climate classification),[4] and has cold, snowy winters. Precipitation is uncommon in the summer. The hottest average temperatures reach 28 °C (82 °F) in July, and the coldest averages reach as low as -4 °C (25 °F) in January. Tornadoes are also possible in Burdette from March–November, with the peak tornado month being June. Usually, tornadoes are rated F2 or lower on the Fujita scale, however approximately every 25 years an F5 tornado occurs.

Political parties in the Kingdom of Burdette range from center-left to right-wing, with a wide array of ideologies being adopted. The most common are monarchism, capitalism, and social democracy. In total, there are six parties, all of which hold seats in parliament.

The Monarch of Burdette is known as King if male and Queen if female. The position is hereditary. The Monarch is the most person in the nation and has significant powers that may be exercised through Royal Edicts, one of the more common pieces of legislation in the nation. In addition to this, the monarch occupies several other powers such as acting as the leader of the Burdette armed forces and the power to veto legislation among other powers. The incumbent monarch is Isaiah David, who has been the only Monarch of Burdette with him being the founder. He is attributed for early development.

The Kingdom of Burdette has one court which is headed by a single judge. The judge and is nominated by the Minister of Justice and confirmed by the royal parliament. Given that there is a lack of legal issues and disputes, the courts primarily verify every law passed by parliament and interpret the constitution when disputes arise. Burdette categorizes cases into three separate categories:

It is the judge's responsibility to categorize the cases that arise. If faith in the judge is lost or it is believed the judge is abusing any power, a vote of no confidence may be held where if 50% of the royal parliament do not support the judge they will be removed.

The Kingdom holds a mostly isolationist policy that has been fading away. It currently only recognizes a few other nations but is an observer in the Grand Unified Micronational. It has also ratified several conventions including the Sough Convention on Global Climate Change of 2020 Volume II, Wrythe Convention, and the Edgbaston Convention.

The Kingdom of Burdette has a small market-based economy mostly providing services to Americans, such as mowing lawns and shoveling snow. It also has an agriculture sector that is mainly composed of the garden in Isaiah David's backyard where cucumbers, bell peppers, tomatoes, and other cash crops are grown and then sold in exchange for the American dollar–the de facto currency of the Kingdom– which massively contributes to the Kingdom's economy. The government does not instate taxes, and its budget is funded entirely with donations. Government spending averages $13-15 USD a month but can be higher depending on the budget parliament sets. 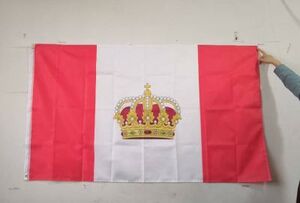