From MicroWiki, the micronational encyclopædia
(Redirected from Pannonia)
Jump to navigation Jump to search

The Republic of Pannonia (in Pannonian French: Républiqe de Pannonie; in Pannonian script:

) is a micronation founded on 11 November 2011 by B. N. Brunner, current president. It is a statecraft project aiming to establish and maintain a territorial presidential republic. Although the Republic of Pannonia had previously been non-territorial, it is now claiming small, unused (or reasonably abandoned) pieces of land in European macronations. It is located primarily in the United Kingdom and Hungary with some territories in Greece, Germany, Italy and Norway. Citizenship can be acquired on its website for free. The republic issues passports, secondary license plates and international ovals in the form of printable documents.

Pannonia was an ancient province of the Roman Empire. Although the micronation has no relation to the ancient Roman territory (except the fact that several Pannonian provinces are located in Hungary), it uses the same name translations (e.g. Pannonie and Pannónia). Moreover, the majority of the republic's territories (usually refered to as provinces) have names deriving from the names of ancient Pannonian cities and auxiliary forts, such as the capital Sirmie (from Sirmium), Savarie (from Savaria), Çélie (Celeia), Çertisse (from Certissa), Sérvine (from Serbinum or Servitium) and Scarbantie (Scarbantia).

Since the Republic of Pannonia consists of a multilingual and intermacronational community, several translations of its name are in use. These names have all derived from the same Latin root and, therefore, can be considered very similar.

The Republic of Pannonia was established at 16:00 (UTC) on 11 November 2011. The date of the official establishment was decided prior to the event, which could take place on the numerologically special day of 11-11-11. The event, which was held in the president's house, consisted of the introduction of the state's flag, coat of arms and national anthem. The date has become the national day of Pannonia.

From 11 November (date of official foundation) to 31 December 2011, the Republic of Pannonia did not have any claim for physical territory. This was because the government was still in need of development and there was hardly any interest in the project.

From 1 January 2012 Pannonia claims physical territory in Europe. According to the president's first resolution passed on 25 December 2012, the Pannonian Registry of Territory (Rejistre du Territoyre Pannoniqe, also RTP) claims small pieces of land that are not in use and proclaims them 'provinces' of the Republic of Pannonia.

On 5 April 2013, an official resolution was passed by the Presidency of Pannonia and the RTP, concerning the territories claimed by the republic. The revision of territorial claims stated that Savarie (PN2) and Scarbantie (PN8) will be relocated while maintaining their cultural aspects, and that the areas covered by Çélie (PN3) and Sérvine (PN6) will be extended. Furthermore, the resolution included the establishment of five new provinces, namely Acumynçe, Marsonie, Yntreçise, Arbone and Réne.

The territory of Pannonia is divided into provinces, since it consists of separate pieces of land. In case the government claims more territory, the new area will automatically form its own province. Provinces are usually enclaves of different macronations with their own flag and area code, however they all belong to the Republic of Pannonia and cannot be governed separately. Provinces are registered by the Rejistre du Territoyre Pannoniqe (Pannonian Registry of Territory, RTP for short) and the Presidency of Pannonia.

Due to the extremely low population and the small size of claimed territory, the Republic of Pannonia is currently run by a basic presidential system, allowing the president to be in charge of both the government and the judical system. Meanwhile, the president's decisions are highly influenced by the citizens.

The Présidynçe de Pannonie (also Presidency of Pannonia) is the name given to the government of the Republic of Pannonia. The committee consists of three members from three European macronations:

The Republic of Pannonia is run by the collaboration of a number of minsitries and official internal organisations (agencies). In 2013, new ministries are going to be established.

As a young micronation, the Republic of Pannonia has a little number of intermicronational relations and has only been recognised by a few micronations. Due to the little territory and the low population, the physical exchange of ambassadors is impossible. The Ministry of Foreign Affairs (Ministēre des᷇ Affeer' Etranjēr', also MAE) is the agency being responsible for the state's diplomatic relations with other nations, and also for issuing citizenships (see below).

These macro- and micronations were automatically recognised by the Republic of Pannonia on 18 November 2011 as part of the MAE's "diplomatic preparation" actions:

Mutual recognitions with other micronations

Diplomatic relations with other micronations

These micronations possess an embassy in the Republic of Pannonia and work collaboratively with the Pannonian government.

Embassies and consulates of the Republic of Pannonia currently operate in the following macro- and micronations:

The embassies and consulates of the Republic of Pannonia which operate in the states listed above are the followings:

Pannonia is a member of the following intermicronational organisations: 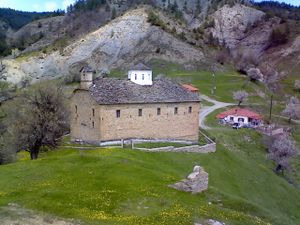 The culture of the Republic of Pannonia is highly influenced by Hungarian and Italian cultures. With regard to languages, the culture of Pannonia has some influence from French and British cultures as well. Culture is developed by the Comité Culturel de Pannonie (Pannonian Cultural Committee), which aims to create an in depth culture for the community of Pannonia through collaboration.

The national dish of Pannonia is garlic toast with dandelion salad (also called peen grillé ā l"eel with salade de pissynlit' ). It originates from the area of Troysvilles province (PN9). On special occasions, several types of cheese are served with olives and garlic. According to the tradition, each participant must eat at least a small portion of the special starter, since it has symbolic meaning.

Although the majority of the population is either Christian or Jewish, the Republic of Pannonia has no restrictions regarding religion. The territory of Pannonia contains two Greek orthodox churches (both in Troysvilles), which are currently used by nationals only. Pannonia provides all citizens the right to practise their religion. A high majority of the current population of Pannonia is white in ethnicity, most from Central and Southern Europe (Hungary, Italy and Greece), and North America (United States).

Because Pannonia claims territories in three countries and is influenced by at least four different European cultures, the Presidency and the Comité Culturel de Pannonie have established a unique list of national holidays, consisting of dates of national or religious celebrations on which Pannonian citizens are not obligated to work. The latter, due to the lack of state religion, refers to all alternative religious celebrations of a certain season. Therefore, citizens may have the ability to choose the appropriate celebration with regards to their religion. 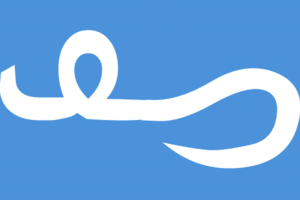 Flag or symbol of Pannonian French

The Republic of Pannonia has three official languages: English, French and Hungarian. English is used for international communication, French is the official spoken language of the state and Hungarian is considered official due to its wide use in many provinces. Official documents, however, must be published in English and French.

First article of the Universal Declaration of Human Rights:

Logo of the MAE

Citizenships can be acquired on the state's official website for free by everybody with a macronational citizenship and an understanding of the concept of micronationalism. The Republic of Pannonia has much to offer to new citizens. Some of these include:

Pannonian citizenships are issued with the assistance of three of the main Pannonian organisations. The Ministry of Foreign Affairs (Ministēre des᷇ Affeer' Etranjēr', also MAE) is responsible for most of the work, although official documents are produced by the National Police of Pannonia (Poliçe Naționale de Pannonie). Online requests are received and analysed by the Pannonian Media Association (Assoçiațion des Média' de Pannonie, AMP for short). 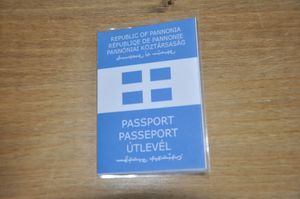 According to the most significant governmental decision, the Resolution of Regional Representation (passed in January 2012 by the Presidency), each new citizen must be automatically assigned to one of the state's provinces. The law's purpose is to ensure that the semi-annual Pannonian population count (or census) is reliable, although it is also useful as a promotion of cultural diversity among citizens. On the other hand, provinces have no right for self-government and all decisions are made by the Présidynçe de Pannonie. Citizens reserve the right to change the province they officially represent to an other one in the framework of a census, regardless of whether they intend to change it from their automatically chosen province or a province that they had previously selected themselves.

In order for the Republic of Pannonia to accept an application for naturalisation, the applicant must be a citizen of at least one macronation that is recognised by Pannonia. According to the national population count of June 2012, the citizens of Pannonia are citizens of the following macronations: 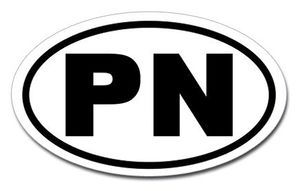 Although the Republic of Pannonia claims small pieces of land with hardly any roads and no transport services, all official citizens are eligible for unique second-level license plates. Moreover, printable international 'PN' ovals may be placed on vehicles of official citizens to show their Pannonian citizenship, unless their country's (macronation's) law does not allow it.

Symbol of the AMP

All types of media are controlled by a governmental organisation called Assoçiațion des Média' de Pannonie (Pannonian Media Association, also refered to as AMP). This association is in charge of publications, information published online, the official website and other sites (such as the forum), PTV Pannonia, available TV and radio stations etc.

On 23 December 2012 the AMP launched an intermicronational project, named 'Collaborative Broadcasting - Shared Internet TV'.[15] The aim was to establish a small union of Sixth World micronations to manage a shared internet TV station. According to the original plans, the members would share the broadcasting time equally and work together, so that the channel would be live most of the time and all member nations would have their own programmes. Due to the common failure of internet-based micronational television channels, there was a high amount of interest in the project from other micronations. The Collaborative Broadcasting Project was temporarily cancelled by the AMP in January 2012, although there is a possibility of it being revived by another participant or an intermicronational union.