The Kadmurian Empire was located between Austria and Hungary, and the capital city is in Austria. The official language is Kadmurian, but the government uses the English language for international communication. The Hungarian, Croatian (mainly in G.D. of Krain), and German language is also spoken in the country. After a long inactivity, the country became active again and a new head of the government was elected. The Kadmurian Empire wants to be active, and try to be a part of the great micronational world.

The Kadmurian Empire loves to make new relations, or make alliances. The country does not like war and if there if a enemy nation, the people will defend its country or will defend the allied nation.

Kadmuria has relations with these micronations:

The Kadmurian Empire mainly would like to affiliate (make contact, relation, or alliance) with these micronations : (other micronations have also interest)

There are some macronational autonomous provinces, that are recognized by the Kadmurian government.

The Kadmurian Empire is made up of 7 Grand Duchies and 1 Archduchy. Güssing, the capital city of the country, has a separated region between Rijena, Kadmuria, and Sibini. The "head of government" of a Duchy is the duke. Each grand duchy has a duke, and the archduchy has an archduke. The country is solid and stable, with stable borders. The duchies are integral parts of the Kadmurian Empire. The largest city in Kadmuria is Körmend (in Kadmurian: Karmada, located in G.D. of Esijek), and the second is Güssing. 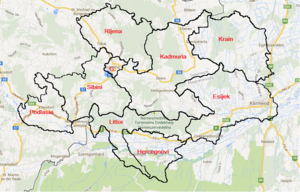 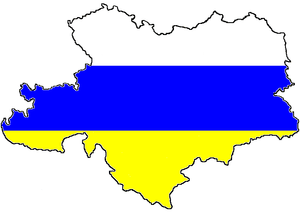