Most Glorious and Holy Empire of Kirkland

The Most Glorious & Holy Empire of Kirkland is a small, territorial micronation based mostly in and around Kansas City, Missouri, United States. Kirkland is an Constitutional, Aristocratic Monarchy.

The beginnings of Kirkland can be traced to Emperor Brayden's early years. As Brayden grew up he began to take an active interest in politics and political systems. Early in 2011 Brayden discovered the culture of micronations. He immediately began to plan to start his own micronation. Together with his long time friend Stephen Landes, later Grand Duke of Balromia, King Brayden decided to form a new nation with himself as King. The two decided to form a nation in which a landed aristocracy held the true political power in the nation.

Early in the day on 16 February 2011 Brayden began to draft a constitution for what would become Kirkland. He immediately found what he called a "divine inspiration" for his work and concluded that he was to be King by the Grace of God. Brayden declared himself King of Kirkland and immediately began to write the preliminary laws of the new nation. The Kirkish Constitution and the "Royal Seven" (the first seven royal decrees) were completed late in the evening on the 16th of February. In the ensuing weeks the nations established many laws. It also began to show economic growth with the founding of a Bank (the First Bank of Kirkland) and an armament production and distribution company (Kirkland Armament Corporation). 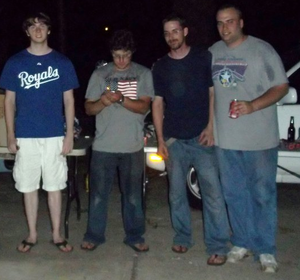 As 2011 pressed on the Kingdom continued to grow. The government began to act more regularly and made laws regularly. The Kingdom added a fourth Grand Duchy on April 1, the Grand Duchy of Arlington. In early July the Parliament passed a bill that changed the "Grand Kingdom of Kirkland" into the "Most Glorious & Holy Empire of Kirkland" and conferred upon the King the higher title of Emperor. The nation continued to prosper while slowly growing. By July 17 the nation's forum boasted 10 members. However, a storm was looming that would impact the course of the nation's history.

Anger against the monarchy and nobility began to bubble. The nation's regular citizens were becoming increasingly upset at the measures taken against them. The government had instituted a number of laws that removed almost every semblance of freedom from regular citizens. Only nobles were allowed full consideration under the law and even that was a stretch after the passing of the Sedition Act. Finally, after many months of tension the Kirkland People's Liberation Movement, a secret underground communist group, led by Nathaniel Yates attempted a coup to overthrow the Emperor. However, the coup failed and Yates and all of his associates were permanently banned from Kirkland. A Parliamentary report was commissioned to summarize the events before during and after the coup. This event led the Emperor to question the current constitution and on July 24 he called for a constitutional convention to draw up a new constitution that would grant him even more power than before.

Following the failed coup an era of repression set in. The Emperor and the Parliament passed many laws limiting freedom of speech and expression. Anyone found to be sympathetic to any kind of rebel causes was banned and many laws were in place to make such moves perfectly legal. The new constitution that was enacted was full of "reforms" that took away many citizen rights. The military came to a prominent place in Kirkland as increased security became a priority. However, this era could not last. Eventually the concern over rebellion and revolution began to subside. Paranoia was no longer rampant. In an unprecedented move the Emperor instituted the first constitutional monarchy of sorts in his home Grand Duchy of Alovia. He allowed for a completely democratically elected legislature with a limited executive. This lead to the era of enlightenment.

Following the democratization of Alovia, a wave a freedom swept over Kirkland. The much-hated Sedition Act was repealed. An act guaranteeing freedom of speech passed through Parliament. In the first such motion of its kind the Parliament adopted a Constitutional amendment that separated Parliament into two houses, the House of Lords and the House of Commons. The House of Lords was to function much like the old Parliament but with each noble being automatically granted a seat. On the other side however, the House of Commons was to be made up of only regular citizens and was to be democratically elected. This was to be the first national democratic legislature in Kirkland since its founding. What came to follow was an outpouring of democratic sympathy and liberalism. On September 26, 2011, the Grand Duke of Arlington His Grace, Dakoda George who ruled Georgeton thought it was quickly becoming inactive. He intered negoations to have Georgeton land merged into Arlington on September 27, 2011 and on September 28th 2011 all Georgish lands became part of Most Glorious and Holy Empire of Kirkland and Dakoda George became the Duke of the Dukedom of Georgeton.

Main article: Dissolution of the Empire of Kirkland

On October 13, Emperor Brayden announced that the nation was to be dissolved. Dakoda George immediately took control of the nation, and later that day, Mark II announced his support and launched a Re-organization plan. However, the Prime Minster, His Grace Stephen Landes, Grand Duke of Balromia, stepped in on the 18th of October and invoked the Constitution and declared Dakoda George's claim to the Regency void. This did not end the re-organization but rather brought the re-organization under the leadership of the Prime Minister as the new Regent.

In the end the nation was split into two separate entities, the United Kingdom of North Kirkland and Arlington and the Democratic People's Republic of Kirkland. The nations recognize the sovereignty of each other and maintain cordial diplomatic relations.

The government of Kirkland is codified in the Constitution of Kirkland. The system that best describes the Kirkish political system would be Aristocratic parliamentarianism. However, Kirkland also has many of the criteria for absolutism.

The Supreme Court is the primary judicial body in Kirkland. It has the responsibility of bringing criminals in Kirkland to justice. The Supreme Court is appointed by the Sovereign and serves until death or retirement. The Court is made up of three permanent Justices. They use the Legal Code of Kirkland to determine the ruling in all cases. Trial by jury does not exist in Kirkland as cases are determined solely on the interpretation of the Kirkish Legal Code by the Justices. Also, all judgment are final and there is no appeal system.

Stephen Landes is the current regent of Kirkland. The regency position was established when the Sovereign, announced his abdication in the nation on October 13, 2011. The Regent rules exactly like the Sovereign but the title of Regent is not hereditary. It is also the duty of the Regent to either find a successor to the throne or, as is currently the case, facilitate the re-organization and dissolution of the nation.

Alovia is that capital provice of Kirkland. It's main feature is Kirk House which acts as both the Imperial Palace and the Parliament building. The rest of the province is grassland dotted with trees. The eastern border of the province is a rather thick forest. The Grand Duke of Alovia is Emperor Brayden I

Valoria is the third province in Kirkland. It is very small and is comprised of a duplex that the King's father lives in and the surrounding yard. This province allows easy access to trainyards that can be used to transport goods into and out of Kirkland to the surrounding United States. The Grand Duke of Valoria is His Grace, Ronald Drown.

Arlington is the fourth province in Kirkland. It is large with 30 acres of land in between Kansas City, Missouri and Saint Joseph, Missouri. On September 26, 2011, the Grand Duke of Arlington His Grace, Dakoda George who ruled Georgeton thought it was quickly becoming inactive. He intered negoations to have Georgeton land merged into Arlington on September 27, 2011 and on September 28th 2011 all Georgish lands became part of Most Glorious and Holy Empire of Kirkland and Dakoda George became the Duke of the Dukedom of Georgeton.

The following dates have been officially designated holidays by the government of Kirkland. On these days all government offices are closed. Also, anyone working on these days is to be given automatic overtime pay.

Kirkland maintains a policy of non-aggression with all other nations. The nation is also not very proactive in foreign relations but is attempting to rectify this situation. Kirkland takes the approach that establishing informal relations is equal to recognising Kirkland as a sovereign state. As such "formal relations" only amounts to the formation of official state treaties or alliances and not "treaties of recognition." Kirkland is also a member of the Organisation of Active Micronations and uses this platform to increase its visibility on the international stage.

These are the nations that have signed formal treaties of alliance with Kirkland.

These are the nations with which Kirkland has established informal relations

These nations were immediately recognized by Kirkland upon declaring independence:

All of the citizens of Kirkland are Christian. As of the census taken at the founding of the nation 10 citizens belonged to the officially recognized Christian denomination of Kirkland, the Synod, which serves as the nation's official religion.

The nobility of Kirkland is the most politically powerful group in Kirkland. Nobles automatically become members of the House of Lords upon being granted their noble title by the Sovereign. All nobles, except Knights and Life Barons, hold territory in Kirkland. Only the Sovereign can issue, or take away, noble titles and as such the Sovereign has by far the most power of any single citizen or noble. The nobility is arranged in a hierarchy that creates a kind of master-vassal relationship between nobles.