Goldsworth Park as it is known in the Dale Empire has the largest single body of water within dale borders and is home to the Royal Dale Naval Base. The Village has no permanent civilians but because of the number of buildings within the Goldsworth Park region, it has been given village status from the Dale King. 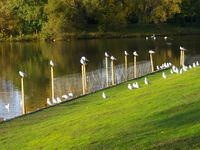 The region prides itself being one of the most athletic able place in the dale empire containing a skate ramp, a BMX track, 3 public football pitches, a children's play area and a basketball court. This region also used to be a popular place for the king when he was growing up nearby and is currently the official training area of the Dale National Football Team.

The RDNB Goldsworth is a split naval base for the royal dale navy in northern dale empire or better known as Southern England and consists of the Goldsworth park lake and Dalebarge a small section of the better-known basingstoke canal in St Johns England. The naval base has been in use since the creation of the navy back on 22 May 2011.

On the 3rd August with the creation of the Dale National Team, it was decided with the regions 3 public pitches and 2 astro pitches, that this would be the original location for the Dale National teams home pitches until the Cage/Churchill stadium which is located at the Winston Churchill school was seen as a better choice.