From MicroWiki, the micronational encyclopædia
(Redirected from Flag of Verd'landians)
Jump to navigation Jump to search

There are plenty of flags used in Verd'land as official or unofficial ones.

The "Cross flag" had appeared spontaneously. It was firstly and very quickly created as new flag for Verd'landians to change a United Lands' Tricolor which had been used before. Despite the newness, a new flag immediately became an important national symbol, as in fictional Verd'land, as in real Verd'landian micronations.

Flag consists of the green cloth with scandinavian cross of yellow and blue colors.

A lot of different proportions were accepted for flag. Hovewer, most part of them was unpreferable. Flag's style (cross) is unique because of narrow proportions interval – between 11:8 (1,36) and 3:2 (1,5) according to list of existing national flags. Other variants make it too short or too long from aestetical point of view.

Actual aspect is 7:5, and it was adopted on 7 November 2017. This opt is justified as compromise proportion – bigger are considered as undesirably long, while less ones have too few variants of rational dimensions. Nevertheless, 4:3 proportion can be also used.

Unlike green flag, Tricolor has much more rich history. It was firstly depicted in 2010-2011 as flag of the fictional state of unnamed anthropomorphic nation, which much time later became a "Verd'landian" one, and the state itself was named the "People's Republic of United Lands". A first physical flag of PRUL was made in December 2015.

After invention of Hrisumt, the popularity of Tricolor had decreased and now it's used as war flag and naval ensign for Verd'landian micronation.

2:1 is the only allowed proportion for Tricolor.

Flag of the Czech Republic

As a Czech micronation and (factually) a part and representer of the Czech Republic, Verd'land uses its flag too.

By a VẽrdɩDIR standards, Czech flag should be made in 2:1 proportion, however the flags of Czechia used in Verd'land can factually have official (3:2) or general manufacturing (5:3) aspect ratio.

Flag of the European Union 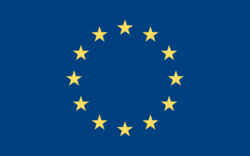 Used because Czech Republic is a part of the EU. Verd'land states that it has a membership in this organisation.

At this moment, VẽrdɩDIR hasn't standard for European flag, so any version can be used.