National symbols of the Royal reformed States of America

From MicroWiki, the free micronational encyclopædia
(Redirected from Symbols of the Royal reformed States of America)
Jump to navigation Jump to search

The Royal reformed States of America attempts to make every symbol of the nation have as much meaning as possible. Symbols, especialy flags, are usualy not overly fancy or very complex.

These are all the symbols that make up larger complex symbols. Most of these can be found on all larger symbols of the RrSA.

Common colors on RrSA symbols are blue, red, black, white and purple. Red, white and blue were carried over from the colors of the United States. Each color has a different meaning:

There are also smaller symbols used on larger and more complex symbols. These usually represent an item, people or places. Some of these symbols were also types used by the USA. Each has a purpose:

These are the complex symbols of the RrSA. Each has a description of its symbolism and its meaning. 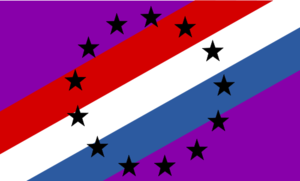 The national flag for the RrSA has much symbolism in the simplicity of its design.

All colors in the flag are explained above. The purple was made to be the background that the ret of the flag goes on top of as to symbolize the ruling of the monarchy over the RrSA.

The meaning of the stars is the same as above. The main idea is strength in unity.

The stripes have mutiple meaning.