The People's reformed Currency, commonly known as the Krensë, is a micronational currency used in the People's reformed States Republic. Origional created as the Royal reformed Dollar in the Royal reformed States of America. It is a bullion based currency, and every Krensë is backed by a silver gram or an equal amount in copper, zinc and nickel. Only bills are used and in denominations from PrK 1 to PrK 200.

((INSERT A SHORT HISTORY OF YOUR CURRENCY[i.e. a few important events, its evolution and design changes]))

((INSERT INFORMATION ABOUT THE CURRENCY'S COINS, HOW THEY ARE CREATED, THEIR DESIGNS, ETC.)) 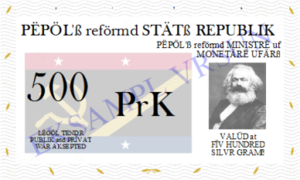 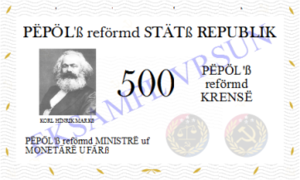 Banknotes of the People's reformed Currency range in value from 1 PrK to 5000 PrK, although only 1 PrK to 200 PrK are in use. The current series of notes were completed in the beginning of September 2010.

Each denomination has the same basic structure except the main image changes for each. The location of all words are the same also. Relations to major symbols of the PrSR can be found throughout the banknotes. The main images on notes are as follows:

One PrK: Flag of the PrSR

((INSERT INFORMATION ABOUT THE VALUE OF YOUR CURRENCY AND HOW IT IS CALCULATED AND/OR WHAT IT IS STANDARDIZED AS[aka what it is backed by].))

One Krensë is equal to: