From MicroWiki, the free micronational encyclopædia
(Redirected from People's reformed Territory of Inyo)
Jump to navigation Jump to search
MarchTemplate:SHORTDESC:March

The March of Inyo (French: Marche d'Inyo; Esperanto: Marko de Injo) or simply Inyo, is a region of the Grand Duchy of Prsänëa. The march is located in Inyo County, California, United States within Death Valley National Park. It is the largest area in Prsänëa with over twenty square kilometers. 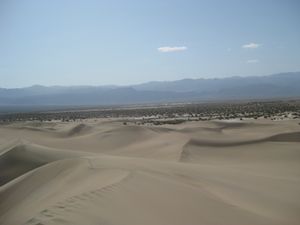 View of the back of Inyo from near the Great Dune

The March of Inyo is situated in the middle of a desert, named "Death Valley". Founded after an early 2009 vacation trip to Death Valley National Park, the declaration was made atop the main sand dune in the center by, then King of the Royal reformed States of America, James Wilary. After placing a stick on top of the Grand Dune, which had been found on the expedition through the march, in such a way as to mark the claiming of the landmark, and having made a short speeh to the likeness, the sand dunes were made part of the RrSA. Future visits to Inyo by members of Prsänëa have been planned, but none have been executed as of yet. The march has continuously been the territory of Prsänëa since the RrSA, through the People's reformed States Republic and the Prsänëa People's Republic in the Federated Republics of A1. It is one of the two oldest lands in Prsänëa, having been established at the same time as the City of Georgetown.

The administrative division of Inyo was origionally dubbed the "Royal reformed State of Inyo" after its founding in May 2009 in regards to its status as a state of the RrSA. However, because of the lack of a present population, it was shortly renamed as the "Royal reformed Territory of Inyo" to reflect the absence of any real government presence. Following the reformation of the RrSA into the People's reformed States Republic, the staus of Inyo remained as a territory, but insteas as the "People's reformed Territory of inyo". The position of the territory was untouched.

Once the PrSR was annexed as part of the Federated Republics of A1, the need for the lands of the Prsänëa People's Republic to follow the established administration norms was implemented, and again the region was renamed, this time to the "Inyo Territory Commune". However, as the PPR continued on and more territories were brought in, the technical challenges of administering five full registered communes became implausable. In July 2010, Inyo was demoted to a simpler "Inyo Territory" name and given a relative city level status.

With the establishment of the Grand Duchy of Prsänëa, the Inyo Territory required once more to be modified to accomidate the newly styled aspects of the monarchy. It was decided to continue to refer to Inyo itself as the "Inyo Territory", but was considered to be a "Crown Territory". The Territory was one of three similar divisions, along with the Wayne Territory and the El Dorado Territory, that made up the "Crown Territories of Prsänëa". It was administered at the "city" level.

On 21 November 2012, the Territory was reorganized following the disestablishment of the Crown Territories administration. The region was then reestablished as a noble land, a march, while the other two regions of Prsänëa, which had also been territories, were made counties. This made that all these territories, which had previously been administered at a "city" level, were administered at a "state" level, at the same rank as Georgetown and Lincoln.

The March of Inyo one of the five noble lands of Prsänëa and is regarded as a "state" level administrative department. The entire area is controlled as the territory of the Marquess of Inyo, who reports directly to the Grand Duke. While the Marquess has rights to the administration of his lands as the title holder of Inyo, the Grand Duke and the central government in Georgetown retains complete authority over the region. The Marquess acts as the local executive and legislative authority, and may form his local government as he pleases, but with only the powers as delegated to him and the region by the Grand Duke. The ownership of the land is retained by the Grand Duke.

On 18 July 2013, the March of Inyo was further divided internally into the Viscounty of the Mesquite Dunes and the Barony of Salt Creek. The Barony and Viscounty are headed by nobles of each approproate rank as granted by the Grand Duke. Both lands are subjects of the Marquess of Inyo, and unlike the administrative privilaged Marquess in Inyo, are given no government functions, and hold a title only. The Viscount of the Misquite Dunes is referred to as "Your Lordship", and the Baron of Salt Creek is referred to as "Master". 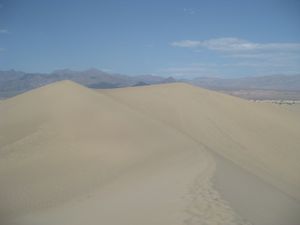 Landmark of Inyo, the Grand Dune

The Grand Dune, along with the many other surrounding dunes, are the only main attractions of Inyo and make up the entire geographic structure of the march. Since the march was founded solely as a way to promote and popularize the beauty of the valley, no reasources of any kind, beyond sand, exist. The codified region that is encompased by the territory was made offical in late 2011 as: North of California State Route 190, West of Stovepipe Wells Road, South of N 36 38' 42" and East of W 117 7' 48". 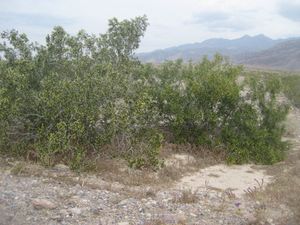 The climate of Inyo is extreme and temperatures rise above 40 °C (100 °F) easily in the summer months. Rain is scarce and therefore water is also. The winter months see very cold temperatures as well. It is even possible to see snow to lower levels of the mountains into the valley. Because of the surrounding mountain formations, the weather varies and differs quite a bit from regions farther west.

Due to the undesirable quality of the climate to live in, and because of the location of Inyo in an American national park, no population is sustained within its borders. Visits by Prsänëans are also rare because of this. Like the human species, other life forms do not take hold often in the territory. The only known species of plants and animals are a few reptiles, insects, and the creosote bush.