Military of the Royal reformed States of America 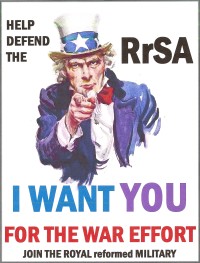 The Royal reformed Guard is the armed escort and protector of all government officials. The main job is to see that officials are always escorted from place to place, and that there are guards stationed in places to protect officials.The current force is three members, one enlisted and two officers. The official uniform is purple.