The Republic of Tavil, also known as the Tavil or Tavilland, was a micronation located in the territory of the disputed Bir Tawil. It borders with Egypt in the north and Sudan in the south, east and west. Also in Turkey's Antalya province (Belkıs), Puerto Rico's (Berdwind States) has a very small region. It was established on 14 May 2020 and has 7 registered citizens but population 1506, the capital Belkıs.

The Tavil Republic was founded in the Bir Tawil region, which Egypt and Sudan did not want, on 14 May 2020, when it declared independence from said countries.

Main article: List of political parties in the Tavil Republic

There are currently 1747 people.

There are currently 5 public holidays in the Tavil Republic. 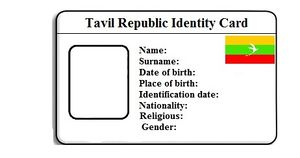