The flag of the Marxist People's Republic of Burkland (Esperanto: Flago de la Marksisto Popolo Respubliko de Burklandio) is a national ensign officially adopted on September 14, 2011. It is formed by a horizontal triband with Burkland's national emblem in the centre. The red represents the blood of the workers and luck;[1] the yellow represents the hammer and sickle. The national emblem represents Burklandi patriotism.[2]

The flag is sometimes named "La Liberecolor", which comes from the Esperanto words La Libereco,[3] literally meaning "The Freedom". A curiosity is that a more obvious version of the same word would be La Libera, Esperanto for "The Freedom".[4] This comes from the Burklandi's desire for freedom and how they see the flag as a symbol of it. The use of the Esperanto language in the name of the flag is based on Esperanto being an official language. The origin of the idea came from President Matthew but neither the Burklandi government or the Burklandi people have approved or even considered the official use of the name.

The law does not specify the position or size of the national emblem rather it must be "positioned in the centre of the flag of our glorious state of the people." According the Burklandi government, the flag is more than the coat of arms.

As with most other micronational flags, the Burklandi national flag should be flown every day by the legally registered public institutions from 12 a.m. EST until 1 p.m EST. Private institutions, businesses and citizens should fly the flag on regional or national holidays or on days determined by the Regional or National Executive. However, this is not enforced as a criminal law. No institutions are forced to fly the flag because of the low supply of flags but the flag would be enforced in: 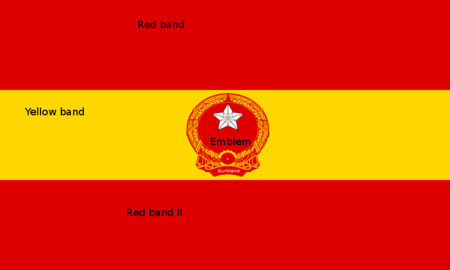 A construction sheet of the old Burklandi flag.

Comrader flag before Natlandism was adopted.

The flag of the ComradeMr Republic was adopted officially by Matthew on June 13, 2011. It was formed by two diagonal lines: red and blue, red represented communism, the blood of the Cizlandeese citizens and the blue represented republicanism.

The flag was often considered non-serious as it had a poor design.

The Natlandist regime used three flags during its short life. The meaning of the three of them is still, at least partly, unknown, because at the time no official protocol was established by the Natlandist directors. This, together with the fact that none of the Comrader Natlandist flags where often used, is a common source of confusion within micronational historians and the Burklandi citizens. The first flag was a green flag with the coat of arms in the centre, and was used only during for a short period, between June 27 and July 3, 2011. The second flag was a green-white-green triband with the coat of arms of the the centre which changed when the coat of arms changed. This one was on use from July 3 to July 9, until the Marxist People's Republic of Burkland was founded. 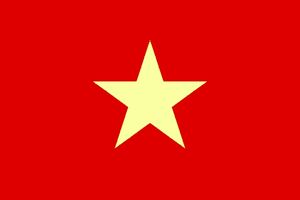 The first Marxist flag was a red flag with a peach star in the centre. It represented communism and socialism. It was based on the Flag of Vietnam. 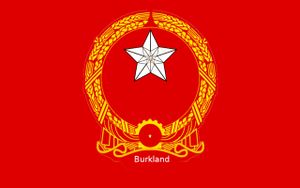 It was used as the official flag of Burkland from July 23 to September 14, 2011, when it was replaced by a red-yellow-red triband flag with the national emblem in the centre. The flag has a civil flag without the coat of arms with is not often used as it is plain and Matthew says it is only good to make an SVG flag.