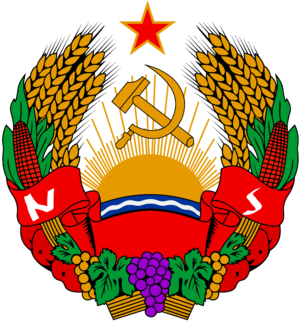 Coats of arms for both the autonomous socialist republics.

The autonomous socialist republics of Burkland (or ASRs) were two autonomous republics within the territory of the autonomous Zealandian canton of Burkland. Expect for land set aside for the Federal Territories (which was only the capital, Bundeshauptstadt), all land above the equator was considered to be "Northern Burkland" and all land under the equator was considered to be "Southern Burkland". Both autonomous republics had the right to declare independence via a referendum. The system was based on a similar system in Zealandia.

While the autonomous republics had different flags and anthems, they had the same coat of arms and motto and both gave Serbian official status. The coat of arms was also used by the Ministry for the Autonomous Republics. This was meant to symbolize the two republics' unity and differences.