From MicroWiki, the micronational encyclopædia
(Redirected from Duke)
Jump to navigation Jump to search

Duke, commonly referred to as the Principality of Duke, is a self-declared sovereign nation, or more commonly known as a micronation to outsiders. Duke declared its independence on 5 October 2017 in the United States. Duke is composed of 5 princely states that have land claims in Hong Kong, Catalonia, and Germany with the larger predominant piece of land located in the United States. The nation's mainland is surrounded by the State of New York in the United States of America. The current Prince of Duke is Tom Kap.

Duke's official capital is the city of Chatham, more commonly known as Chatham City. Other cities include Lesser, Bin Awa, and Klixan. The Principality consists of five Princely States and a myriad of other possessions. English and Spanish are the most commonly used native languages of Duke, and Kanglap and English are Duke's official languages. 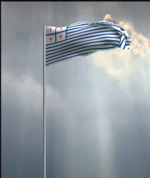 On 9 February 2017, Tom Kap adopted Llyod, a dragon betta fish. Tom had Llyod for over 1 year. On Thursday afternoon on 11 April 2018, Llyod passed away from old age and a tumor. Tom Kap's mother said that she saw him swim from his log decoration to nearby plants. Later, when she came back, he wasn't moving. He was pronounced dead later that day. A traditional hundred-day mourning period was observed. Llyod was then taken to the Zang River (Hudson River) and placed in the water. A Taekist "Passing away ceremony" was held. A QEEPR site was made to honor him link to memorial.[1]

When Duke fully became non-simulationist, Donyang and Lesser Chatham (not to be confused with the capital of New Sarasota, Lesser Chatham City) were dissolved. Violet Box was renamed Lilac and integrated into Duke.

After 4 inactive months, the nation restarted.

Duke is a benevolent autocracy with elements of representative democracy. The government is regulated by a system of checks and balances defined by the Dukian Constitution, which serves as the country's supreme legal document. In the Dukian system, citizens are usually subject to one level of government; federal. In almost all cases, legislative officials are elected by a plurality vote of citizens by the state. There is no proportional representation at the federal level, and it is rare at lower levels.

The Dukian government is composed of three branches; The Almyugan, the legislative branch which drafts federal laws, declares war, and has the power to wield the economy, The Prince, who is the commander-in-chief of the military, can veto legislative bills before they become law, and appoints the members of the Cabinet and other offices, who administer and enforce federal laws and policies, and The Ministry of Justice, which administers courts, interprets laws and overturns those they find unconstitutional.

Duke used to be an authoritarian republic before a coup d'etat occurred and became the People's Republic of Duke on 23 February (After the 23rd February incident). It is a one-party state under the rule of the Topek party. Other political parties exist but the Topek Party is the majority of the Parliament with 6 seats out of 10. Elections for parliament representatives happen every 3 years. Duke then transitioned to democracy with vice-presidential elections every 2 years. Now Duke is a federation of Princely State.

The military has 36 active members and a cyber warfare unit (namely Unit 22). There are 6 regiments, each with 6 active members. Most members reside in Europe and are not in close proximity to their assigned unit's headquarters. Most soldiers live independently, but during wartime are recalled for service.

In Duke as of September 2019, there is one Monorail line and one Railroad line. The railroad line is in the form of a loop and uses Piko tracks which power the train with electricity. The monorail and train are both situated in the capital city. The monorail is owned by Chatham Monorail company, while the train line is owned by Duke rail. National Dukian train tickets are valid for both lines.

The judicial system of Duke is very similar to that of the United States. The Supreme Court is located in Chatham City and is run under Judge Kirsten Kap, The Central Prosecutor being Zoe Kap.

Chatham City is the capital of Duke. It is also where the legislative and executive branches are based. It is the second-largest city, behind Lesser Chatham in New Sarasota, and Klixan City in Klixan Province. It is the Capital of Chatham and is situated close to the border with the United States. It is also nearby Violet City in Lilac. Chatham City is Chatham Park, one of the most important sites in the city. The park is situated near the foreign quarter. The park is very small but citizens often go there to exercise. It is one of the most visited tourist destinations in Duke.

The Taiping and Zang rivers are important in traditional Dukian Culture. They are more famously known by different names, but the traditional names are widely preferred in Duke.

Duke uses a system called Balmungse. This system classifies allies and enemies, as well as other aspects to do with foreign relations.

Duke's currency is the Sheka. One Sheka is equivalent to $0.20 USD. They are produced by the Bank of Duke, from which printed banknotes are redistributed. The Bank of Duke produces the quantity of Sheka banknotes assigned to it, puts them into circulation, withdraws worn notes, takes part in the search for and experimentation of new security features and contributes to the definition of common standards for the quality of the notes in circulation and the fight against counterfeiting. Duke has a capitalist mixed economy which is fueled by funding, donations, and productivity. The United States is the largest importer and exporter in Duke.

Duke is made out of Several princely states:

An Autonomous settlement is an administrative division with a degree of autonomy, where certain laws do not apply.

Duke uses the Topek Calendar. There are 12 months, and on the 22nd of each month the "Honor Part" begins. 22 January 2006 Marks Topek Year 1. January 22 is also observed as the Leader's Day Holiday.

Kanglap and English are Duke's official languages. People often also speak Dukian Slang. It is estimated that Kanglap has 12 fluent speakers. Kanglap sounds similar to Spanish and other romance type languages due to its speakers speaking rapidly. Kanglap is notoriously known for including -el at ends of words.

In Duke, fashion is important. The most popular clothes now for men are the Kangera style. This is a military style jacket with a Songkok cap. These are usually worn by government officials and important Hyesanien Ethnic politicians. For women modern clothes is very popular but on traditional holidays they wear a Hanbok and a headscarf. Duke's traditional clothing is very diverse due to the cultural diversity of Duke. There is also a unisex fashion trend called a quera which is a braid in form of string clipped in hair. An agal or a Keffiyeh is popularyly worn by Tom Kap when making royal speeches.

The Dukian flag was designed by Tom Kap. There are twelve stripes, and four red crosses. Each cross symbolizes one of the four principles; Justice, Equality, Freedom, and Life. March 19 is the day of the Dukian Flag. On this day, a festival is held at night honoring the Flag of Duke.

Duke Central Television (DCTV) is a state-owned Dukian TV network. It occasionally broadcasts Dukian and International news and TV shows from Duke. The latest TV shows include Captain Knots and Fighting for Duke. Captain knots is more comical, while fighting for Duke is a propaganda documentary about fighting against Duke's enemies for the good of the nation. The Dukian Times is a weekly newspaper available in multiple languages, including English. Duke Radio is an internet-based radio station. DCTV Duke News is an internet Newspaper. It is a popular mode of media consumption and is especially popular among Dukian Youth.

The Duke postal service is the official postal system of Duke. Stamps are issued. The Dukian Postal service sends local mail, and mail sent internationally often has a stamp of the macronation nearest to the province and a Dukian stamp.

Tourism and tourist sites in Duke are under control and administration of the Dukian Tourism Authority. It is difficult to visit unless you personally know the Kap family or anyone close to the Kap family. Most tourism usually happens in Chatham City.

In Duke, awards are given to citizens or people who help the community greatly.