From MicroWiki, the free micronational encyclopædia
(Redirected from Arkazja)
Jump to navigation Jump to search

The Republic of Arkazja (Polish: Republika Arkazji) commonly known as Arkazja, is a country located in Central Europe. Arkazja has a population of 32. Arpolis is the nation's capital and largest metropolis.

Arkazja shares a border with Poland on all sides.

Arkazja is currently an authoritarian multi-party presidential republic, with legislative body known as the Arkazjan Senate. Most authority in the country is holded by the lifetime President.

The Constitution of Arkazja is the enacted supreme law. The current constitution was adopted by the Arkazjan Senate on 19 April 2022; it guarantees a multi-party state with freedoms of religion, speech and assembly.[2]

Arkazja is a LGBTQ+ friendly micronation, with the government fully recognizing their identities and providing protections from discrimination. 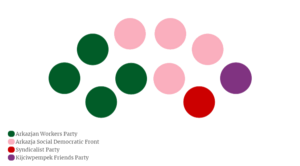 Arkazja have currently active military personnel of 5. Military is still under construction.

Arkazja is a member of the following organisations and accords

The population of Arkazja as of November 2022 stands at 32.

The table below details the population change since February 2022.