Handling of the Coronavirus

Acre uses a form of party-list proportional representation. Voters cast their ballot for a political party, with seats in Parliament then allocated to parties proportionally, who choose candidates to fill their allocated seats. This form of party-list proportional representation is also used in Albania, Argentina and Israel. Additionally, members of Parliament are allocated a constituency proportional to an area's degree of support for their party. As a result, for parties which win small amounts of support throughout the entire country - like the Communist Party - they may end up representing a constituency in which they did not win a plurality of the vote.

The Communists ran on a program very similar to earlier elections: abolition of the Emirate, creation of a secular presidential republic, and the establishment of a one-party communist regime. Some members suggested that a relaxation of the party's Marxist-Leninist doctrine could secure them votes from the other left-wing parties in Acre, but this was staunchly rejected by the party's Politburo. 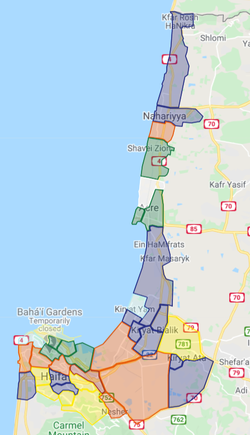 Ben Adelman was re-elected Prime Minister of Acre, with a collective majority of three. His own party's vote share also increased by 2%, netting them the constituency of Kiryat Bialik North from the Liberal Union. After the October 2020 general election, the Conservatives only had a three point advantage over the Liberal Union; after the December election however, there was a thirteen point advantage over the nearest other party, the Labor Zionists. That said, this was mostly the result of the Liberal Union's collapse, concerning some Conservative MPs that they had reached a 'natural maximum' in their vote share.

The December election was a stunning defeat for the Liberal Union, though one that was not unexpected. The party's vote share fell by 10%, from 27% in October to 17%. This caused the party to lose four seats - one to the Conservatives, two to the Labor Zionists, and one to the Peace & Equality Party. This compounded their defeat in October, leaving the party with seven fewer seats than they had in February.

Just as important to many was a symbolic defeat in the fact that the Labor Zionist Party overtook the Liberal Union as the largest left-leaning Israeli party; some feared that the Liberal Union would sink further into a minority-party status if they did not manage to appeal to these lost left-wing voters.

Most blamed the party's poor showing on the unpopularity of its leader Joseph Cohen, who had spearheaded the party's disliked handling of the Coronavirus pandemic. His censuring by Parliament in November had dramatically increased his unpopularity, just weeks prior to the December election. As a result, many within the party immediately called for Cohen's resignation, demanding an outsider figure not affiliated with his government lead the party.

The loss of North Acre to the PEP and Kiryat Bialik North to the Conservatives basically wiped the Liberal Union off the map in East and North Acre, while their loss of Karmel West and Ge'Ula to the Labor Zionist Party shrunk their number of seats on Mount Carmel, previously the stronghold of Liberal Union support.

The Labor Zionist Party saw their vote share increase by 5%, leaving them the second largest party in Acre with seven seats in the Akkan Parliament; this was taken to be a great victory, as the LZP for some time had sought to overtake the Liberal Union as Acre's largest left-wing party. The Labor Zionist's winning of Karmel West and Ge'Ula from the Liberal Union was central to the latter party's defeat.

Many attribute the LZP's victory to a widespread defection by left-leaning Liberal Union voters who, believing Ben Adelman would win re-election, preferred a strengthened left-wing contingent within the coalition government.

With their bolstered results, some hypothesised the LZP could abandon the Conservative Party and enter into coalition government with the Liberal Union and the People's Democratic Union; as the largest party in such a scenario, they could reasonably expect their leader to become Prime Minister. Eli Barak however ruled out any such possibility, stressing his commitment to the Conservative coalition government.

The PDU saw a small gain in their vote share, from 16% in October to 18%. This was sufficient to win them the constituency of Mazra'a-Regba from the Peace & Equality Party. This placed the PDU ahead of the Liberal Union, though they remained the third largest party, behind both the Conservatives and a surging Labor Zionist Party.

The leader of the PDU, Ali Kadhimi, stated the results "confirm the representative power of the PDU for all Arabs, regardless of their religion". The PDU managed to win back many Arab Christians who had defected to the Peace & Equality Party back in October.

Movement for the Homeland

Some in the Movement had hoped to win an additional seat in Parliament, bolstered by anger among nationalists that certain Arab privileges and institutions had not been undone by the Adelman government; most believe however the Conservative Party was able to avoid any defection to the Movement by appealing to the fact that previously the government had lacked a majority in Parliament. Their presence in the coalition government may have also 'gagged' the Movement, quieting any discontent on their part. The party was able to increase its vote share slightly - by 1% - though this was insufficient to win an additional seat.

To many people's surprise, the Peace & Equality Party - whose explicit goal it is to represent the minority confessions in Acre - managed to win a small number of liberal Israeli voters. Most believe these voters were moderate centrist liberals upset at Joseph Cohen's leadership, but unwilling to defect to one of the other Israeli parties. Any boost to the PEP's vote share however was undone by a flow of PEP voters to the People's Democratic Union, who successfully won back a section of the Arab Christian vote which they lost to the PEP in the October 2020 general election.

These conflicting forces caused the PEP to pick up the constituency of North Acre from the Liberal Union while they lost Mazra'a-Regba to the PDU, leaving them with 5% of the vote and two seats - the exact result they received in the October election.

Once again, the Communist Party managed to win a single seat in Parliament - the constituency of Al-Khalisa. The party had not expected to do better, though some believed that a realignment of the party's ideology could increased their appeal to Arab PDU voters and Israeli LZP voters; the party's Politburo however, dominated by Marxist-Leninists, rejected any call to alter the party's constitution. 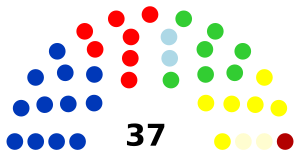 Partisan makeup of the Akkan Parliament

The Conservative Party, Labor Zionist Party and the Movement for the Homeland - already in a minority coalition government prior to the December election - ran explicitly on a promise to form a government together. Discussion over government formation was therefore minimal once each party secured a sufficient number of seats to hold a majority in the Akkan Parliament. As was the case previously, Ben Adelman (Conservative) was chosen to be Prime Minister, Eli Barak (Labour) was chosen to be the Chancellor, and Robert Lieberman (Movement) was chosen to be the Speaker.