Surprising to many was the speed with which Acre's political institutions consolidated. In the February 2020 election, questions surrounding the very existence of the emirate and the Shura Council, and the potential need for a codified constitution dominated the campaign. In October however, most parties appeared to reach a speedy consensus, agreeing with the existence of both bodies within a parliamentary system operating on the principle of parliamentary supremacy. The Communist Party continued to agitate for a secular presidential system, and the Movement for the Homeland vocalised some discontent with the status quo, but otherwise the various Akkan parties agreed with the status quo.

Unlike Acre's institutions, which garnered consensus in between the two elections, the precise interaction between the state and religion remained contentious. While the Liberal Union's proposal of a two-flag solution (wherein an Israeli-inspired and Muslim-inspired flag are both formally recognised) appeased many Akkans, some sought to replace the Islamic-inspired flag with the Israeli one as the flag enjoying primus inter pares (e.g. being placed first when displayed by government buildings). The Peace & Equality Party wanted Acre to recognise Christianity as its third national religion, while the Movement for the Homeland and the Communist Party wanted to remove any formal recognition of religion (though the latter wanted to define Acre as an explicitly Israeli state).

Handling of the Coronavirus

By mid-March (just twenty days after the February 2020 election), a significant number of Coronavirus cases were being reported in Israel each day. On the 19th of March, Israeli Prime Minister Benjamin Netanyahu announced a national lockdown. Previously, the Akkan Liberal Union had refused to endorse any lockdown measures, arguing they constituted a serious infringement on liberty. To the surprise of many, this policy continued past the March 19th announcement; though they stated Akkans should respect Israeli law, they refused to endorse Netanyahu's decision. This was perceived by many as dangerous, and caused outright dissent from the People's Democratic Union, who at the time supported the government through confidence and supply.

The Liberal Union, through the actions of their government coalition, were forced to endorse a national lockdown, but were plagued by accusations of ineptitude; a second lockdown announced by the Israeli government in September was also opposed by the Liberal Union, this time almost causing an open rift in the party itself. Most believe that this act led to the dissolution of parliament, with all parties voting unanimously to dissolve the first session of parliament just a week later, causing the October election.

After several months of vocal opposition to the lockdown from the Liberal Union, the PDU announced an intention to revoke their confidence and supply, stating that the government's obstinance on the matter was endangering Akkan lives; had this occurred, the government would have been left with seventeen seats, lacking a majority by two. Compounding this threat was a similar threat from the Labor Zionist Party, who communicated privately their intent to leave the coalition if a national lockdown was not endorsed.

This caused an about turn by the government, who endorsed the Israeli national lockdown several weeks after Netanyahu's announcement. Tensions continued after the lockdown was lifted however, with many perceiving the Labor Party and the PDU as the true leaders of the government on Coronavirus response. When the Liberal Union leadership again opposed a national lockdown in September, they were met not only by opposition from the LZP and the PDU, but also from within their own ranks.

Acre uses a form of party-list proportional representation. Voters cast their ballot for a political party, with seats in Parliament then allocated to parties proportionally, who choose candidates to fill their allocated seats. This form of party-list proportional representation is also used in Albania, Argentina and Israel. Additionally, members of Parliament are allocated a constituency proportional to an area's degree of support for their party. As a result, for parties which win small amounts of support throughout the entire country - like the Communist Party - they may end up representing a constituency in which they did not win a plurality of the vote.

Not unlike their entrance into the February election last minute, the PEP's announcement that they supported recognising Christianity as a third national religion sapped votes away from the PDU, who lost a seat in Parliament; they also only narrowly avoided losing third place to the LZP, by two points.

Though the LZP was able to win an additional seat in Parliament, many were dismayed at the result; unlike the Conservatives, they failed to capitalise on the unpopularity of the Liberal Union, winning only about half their number of votes.

As support against the government coalesced around the Conservative Party prior to the election, the Movement for the Homeland began to dip in polls - their loss of a seat in the election did not therefore come as a surprise. As in the February election, the Communist Party was able to win a single seat.

The results were a great victory for the Conservatives. Though their lead over the Liberal Union was not as pronounced as polls in earlier months had indicated, it was sufficient to overtake them as Acre's largest party; their vote share increased by nine points in total. The constituencies of Carmel Center and Ramot Remez were gained from the Liberal Union, and Hof HaCarmel was taken from the Movement for the Homeland.

The Liberal Union's vote share dramatically fell, from 35% in February to 27%. Three seats in parliament were lost, and the Conservative Party surpassed the Liberal Union as Acre's largest party. The constituencies of Carmel Center and Ramot Remez were ceded to the Conservatives, while South Nahariya was lost to the Labor Zionist Party.

The party's poor showing was largely attributed to their steadfast opposition to a national lockdown, which was only reversed after both the People's Democratic Union and the Labor Zionist Party threatened to oppose the Liberal Union in a vote of no confidence. When a lockdown was eventually implemented in April, many believed it was too late, and many were equally appalled when the Liberal Union lifted the lockdown just a month later.

The party's leader was clearly upset at the results, and offered his resignation as party leader, though this was rejected in a party vote. Nevertheless, he expressed hope that the party may be able to participate in a coalition government.

Many predicted the People's Democratic Union to do well in the election, as they had successfully protected the Islamic elements of Acre's government, and had also forced the government to announce a national lockdown in response to the growing number of Coronavirus cases. In fact, their vote share fell by 3%, losing them a seat in parliament. Many attributed this to the Peace & Equality Party's late announcement of a proposal to recognise Christianity as a third national religion, winning over many Arab Christians from the PDU. The party's northernmost constituency - Regba - was lost to the Peace & Equality Party.

Movement for the Homeland

As had been anticipated, the Movement for the Homeland's vote share was almost halved, from 9% in February to 5%. This resulted in the loss of Hof HaCarmel to the Conservatives. Some within the party in response wanted to focus upon appeals to economic nationalism, to win over economically left but socially right Russian-speaking Israelis, many of whom were voting either for the Conservatives or for the LZP.

The PEP's late introduction of a policy to recognise Christianity as a third national religion is widely seen to have won over many Arab Christians, who up until October had voted for the PDU. The party won the constituency of Regba from the People's Democratic Union.

Once again, the Communist Party won just enough votes to take up a single seat in Parliament, failing to win left-wing working class voters from either the PDU or the LZP. The party's seat share remained static, holding onto Al-Khalisa. 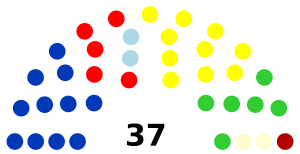 Partisan makeup of the Akkan Parliament

Similar to February, the idea of a government of national unity attracted many, though this time support for this proposal mainly came from the Liberal Union. Many conservatives were sceptical of the proposal, believing that a firmer hand was needed to address the Coronavirus, which the Liberal Union had not shown during their time in government.

The PDU offered to replace their confidence and supply agreement with the Liberal Union and the Labor Zionist Party with a full coalition, which would grant the government a majority of three. Despite admonishing the government for their response to the Coronavirus, they noted the growing consensus on religion as a major success which justified a continued LU-LZP-PDU coalition.

In contrast, the Conservative Party sought to establish a pan-Israeli coalition with the Labor Zionist Party and the Movement for the Homeland; many within the LZP were unhappy at how many concessions relating to religion had been extracted from them, and preferred a coalition with an Israeli party more sympathetic to a national lockdown. This proposal lacked a majority by one seat, however each party agreed to the coalition nominally. Once it became clear that the Communist Party was unwilling to enter a coalition of the other parties, the Emir accepted the minority government led by the Conservative Party.