From MicroWiki, the free micronational encyclopædia
(Redirected from Winterspell)
Jump to navigation Jump to search

Winterspell, officially known as the Kingdom of Winterspell, is a nation enclaved within the US states of Colorado, Utah, and Vermont. It is made up of two duchies, four counties, and a personal domain. Winterspell is populated by 12 citizens. Winterspell is a semi-constitutional monarchy ruled by the nation's first and only monarch, King Petrus I.

Winterspell was initially the name of an exclusive club in the Minecraft city of Linsonkeep. On 13 April 2017, a Discord server was created for the club being run initially by a group of five lords. By December of the same year, the monarchy was established, crowning club co-founder Pierce (Petrus) the king. The nation's parliament was created in October 2018 and has overseen the kingdom's legislative affairs since.

The Kingdom has no active economy but maintained a PayPal money pool that took in donations before the feature was removed. There is a significant culture around creativity and design highlighted by Winterspell's many artistic outlets.

The name Winterspell comes from the merging of two English words, winter and spell.

The word winter in English comes from the Proto-Germanic noun *wintru-, whose origin is unclear. Several theories have been proposed with a commonly mentioned one connecting it to the Proto-Indo-European root *wed- 'water' or a nasal infix variant *wend-.[1] It also can be used as the current monarchy was established on 10 December 2017, when it is winter in the Northern Hemisphere.

The word spell, in this case meaning a period of time, comes from the Old English word spellian and the Old French word espelir both having originated from the Proto-Germanic word spellam. Spell's meaning in this context likely originated around the 1620s with sailors using the term to mean a shift of work. This definition has grown to be used to refer to something lasting for a period of time (e.g. weather).

Winterspell, as a club, was first built in the spring of 2016 as 'The Winterspell Club' in Minecraft by Pierce Anderson (later known as King Petrus) and Hunter Link (now Grand Duke Hunter). It was a one-story building with a single room featuring a large fireplace on the back wall. The building served as a club exclusively open to friends of the founders. The club featured 'membership jackets' made of black dyed leather tunics. This building has been replicated in various Minecraft worlds since.

On 13 April 2017, a Discord server was created as a breakaway from a previous community known as "The Chat of the People". This new server was titled "Winterspell Club Est. 2016" in reference to the original club in Minecraft. The server was initially run by a small group of administrators known as 'Lords'. Each lord wielded nearly limitless power to moderate and modify the Discord server and legislation.

On 15 May 2017, the first constitution was created. This constitution was made up of several 'Acts', half of which were more jokes than rules.[2] Winterspell saw little growth during this early period.

Establishment of the monarchy

Leading up to 10 December 2017, there had been a call from Lord Aidan to add more roles to the Winterspell Discord server. These were created as different titles of nobility, each achievable through different means but mostly managed through nepotism by the Lords. On 10 December, along with the new nobility, a monarchy was established crowning Lord Pierce as the first Winterspell monarch naming the other lords as princes. The monarch and newly titled princes acted as the executive, legislative, and judicial authority within the kingdom. During this period, Winterspell's early Houses (now guilds) saw their origin. 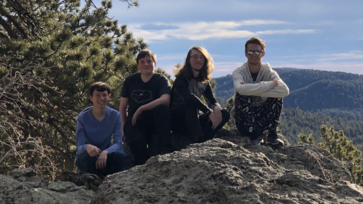 On 28 September 2018, a constitutional convention was convened in Château-Andreas. In attendance were King Petrus, Prince Jackson, and Prince Quinn. The goal of the assembly was to draft a new constitution as the old one didn't meet the democratic standards set by the Winterspell populace. The first draft of the constitution outlined the basic function of the monarchy and nobility as well as outlining the rights of Winterspell citizens.[3] A small number of the original acts were carried over to the new constitution. This document served as the Winterspell constitution until 1 January 2022.

Marquis and the establishment of parliament

It was decided in January 2019 that a more representative system of government was required for the smooth operation of legislative functions and to allow for all citizens to participate if they should so choose. The first iteration of the Winterspell Parliament composed of the monarch (subsequent parliaments of this system did not include the monarch), princes, and a marquis appointed by the head of each House (subject to the size of its population).

The First Parliament was inaugurated on 15 January 2019. It remained Winterspell's most active parliamentary term for over a year despite the fact that near the end of its two-month term, half of its members had either resigned or gone on hiatus. 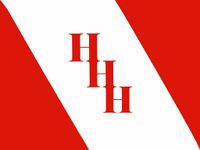 The House of House of House known informally as HHH and dubbed the 'Red Menace' by King Petrus, held a majority of seats in parliament for seven nearly consecutive terms. The house was run at the time by Ben C, though most of its functions in parliament were overseen by Chancellor Grayson H. This dominance allowed for an increase in corruption within the government especially for favourites of either the monarch or the house itself. During this time, members of the house found themselves achieving high ranks and titles within the Winterspell Discord server despite doing little to nothing to earn them. This corruption lasted until Grayson made the decision to step back from parliament. The House of House of House lives on in its current form as the Guild of Guild of Guild though its influence on Winterspell politics has diminished.

The idea of a bicameral system of parliament was originally proposed during the first constitutional convention, but it wasn't attempted until November 2019.[4] Parliament featured two houses: The House of Commons, made up of members elected from the general populace, and the Lord's Room made up of the monarch and princes. This system proved to be ineffectual and sluggish with legislation often taking days or even weeks to pass with members of both houses needing near-constant pressure to vote at all. This had been a stark contrast to the previously quick method of parliamentary voting.

On 11 February 2020, an argument within the Lord's Room regarding the monarch's use of his power led to Princes Jackson and Quinn leaving the Discord server and the kingdom as a whole. Parliament was then disbanded by King Petrus. Winterspell underwent a period of change following the exodus of princes. All houses were disbanded by royal decree and all title grants were frozen. During this time, the monarch and remaining princes, with the help of other members of the Winterspell Discord server worked to try and return Winterspell to a more unified community and ease any tensions that had been developed over the prior few months. Two new princes (Ben C. and Nick R.) were appointed to fill the empty roles. Parliament was reinstated soon thereafter in a unicameral form with only elected members. This ran nearly uninterrupted until 1 June 2020. 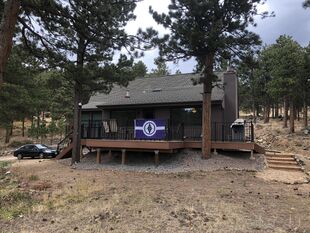 Following the second server ban of Karsen B, the veto of that ban by King Petrus, and the subsequent overturn of that veto, tensions within the government had grown high with voices calling for a change to how parliament operated and how other functions of government and server administration should be modified to create a more fair environment. These ideas were drafted by King Petrus with help from members of parliament, former princes, and close friends into what became the June Concordat.[5] The Concordat primarily altered how parliament operated adding the idea of a 'session of parliament' when all MPs would convene in a voice call or in-person to debate and vote on proposed legislation. It also served to create an established judiciary, a new system for houses separating them into noble houses and guilds, and modify outdated legislation. After the Concordat was passed, parliament was again disbanded to make way for the change.

The Winterspell government is made up of two branches, the Monarchy and Parliament. 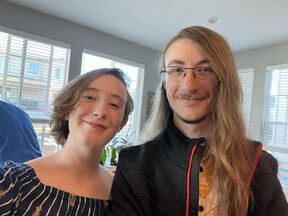 The current Monarch of Winterspell, King Petrus I, photographed with Princess Olivia on Christmas Day 2021.

The Monarch is the head of state and the title is passed down hereditarily using absolute primogeniture. The monarch may issue Royal Decrees, which are often used to modify legislation.[7] The monarch may also appoint individuals to the Royal Court, who work as advisors to the monarch. The official powers of the monarch have never been clearly defined, meaning the throne has the legal potential to wield near limitless power.

Parliament is composed of members elected from the general populace annually. Parliament votes on proposed legislation. There is one seat in parliament for every 10 citizens of Winterspell with a minimum of three seats overall. Parliament is run by the Prime Minister who is elected at the start of each term, and has the ability to call for a session of parliament and run all discussions around proposals.

The Kingdom of Winterspell maintains a system of nobility, managed at the discretion of the throne. There are few landed titles as they often require the recipient to rule an administrative division within the kingdom. There are currently nine noble titles held by six people.

Winterspell is made up of seven administrative regions of varying size and location though all Winterspell territory in located in North America.

Much of Winterspell's cultural identity originated from the Winterspell Club, but both club and kingdom come together to host various events and celebrate holidays as a unified 'Winterspell'. 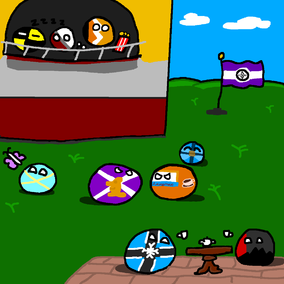 Microball cartoon made in August 2020

The Kingdom of Winterspell recognizes and celebrates a many holidays. Holidays are separated into two categories: national holidays and recognized holidays[12].

The first culture week was celebrated in 2017 and was to celebrate German culture. Subsequent years have celebrated Russia, Austria, Sweden,[13] and Vietnam. Culture week in Winterspell is often host to the showing of films, exploration of music, total translation of the Winterspell Discord into the respective language, and other festive activities. It is hailed as the most successful Winterspell event to happen in a year, often seeing participation from otherwise quiet citizens.

The kingdom also co-hosts an annual summer festival[14] with the Winterspell Club, which features food, music, outdoor activities, and a social environment for Winterspell citizens to mingle.

Winterspell has a thriving artistic community. Countess Ruby S. often produces drawings of her various pets often including local favourite chicken and folk hero, Ms. Jane, and Microball cartoons are also often produced, primarily by Sir Joey R. Winterspell has an art gallery run by Aimee E. which curates the best works from within the kingdom to keep on permanent display.

Winterspell is host to three newspapers and a broadcasting company, most of which are organized under the Winterspell Media Alliance.

The Winterspell News is the oldest form of publication in the Kingdom of Winterspell.[15] Although articles are infrequent, it has put out seven issues often reporting on international crises and internal events. It is run by King Petrus on a personal basis, and is not state-owned.

On 18 March 2021, much of Winterspell’s news and media were organized under a newly created "media alliance", in a move spearheaded by Karsen B [16] The alliance consists of three media entities: Chängr News, The Bravura, and Polybox Broadcasting (the latter two being owned and operated by Karsen). This entity makes publications sporadically but maintains a high approval rating among its readers.