Zen Corporation took control of government bodies, but then failed to maintain them which lead to the shut down of Zen's Government Branch, after the downfall of the Zen Government, John Gordon appointed himself as Interim Prime Minister and appointed three Cabinet Ministers to oversee the rebuilding of a democratic Bysalia. At current the Parliament has not been Opened, therefor Executive powers are vested in the Interim Prime Minister and the Cabinet.

The Bysalian Seperatist crisis was a civil war in the United Kingdom of Bysalia, fought between the Bysalian Defense Force against Socialist Rebels. It began after the Socialist leader thought the then President for being unconstitutional, the Socialist leaders then declared Pinewood independent from Bysalia. The Bysalian Government sent the Bysalian Army to Pinewood to block the rebels from moving towards Hove, the Capital City of Bysalia. Both sides exchanged threats to each other. Some skirmishes broke out between Socialist and Bysalian Forces, but no real major nationwide conflict broke out, the conflict always was confined to the Pinewood border.

After the downfall of Zen Corporation, Interim Prime Minister John Gordon was made the first prime minister of bysalia, several days after the Monarchy was founded and King Adam was crowned. Several Acts were introduced to solidify the Bysalian governments future as a stable political nation.

After the Dictatorship was removed the interim President of Bysalia and General Secretary of the Communist Party of Bysalia John Gordon laid out changes to the structure of government, including:

The President also gained executive powers from the National Peoples Congress for the occupation of several land areas around Bysalia and other areas of interest. The executive powers however do not stretch further than Approval of Bysalian Occupations and Annexations.

An amendment to constitution following a ruling by the National Peoples Congress solidified socialism as inviolable part of Bysalian government and culture. The Government of the Greater Bysalian Republic has been criticized by a few members of foreign micronations for lack of democracy. The president then drew up a plan called Demokratizatsiya (Democracy in the Greater Bysalian Republic) which would allow people to stand for election under the Communist Party in their local area for representation in the National Peoples Congress and possibly a place in the Politburo.

The Socialist Advancement Policy was abandoned by the first Federation Council meeting on the 3rd November 2014 (Stardate 0) a new prime directive was adopted.

The new prime directive of the government is: To Peacefully Engage in Diplomatic Relations and to continue to encounter new micronations and welcome to the micronational community.

The Communist Government announced a decree allowing the occupation of territory for the advancement of Socialism, once the communist government was brought down under the Federation Act, the newly created Federation Council repealed the decree and said that Territory must only be acquired through peaceful means such as: Invitation into the Federation.

Nixon was a state of Bysalia. it was represented in the Congress by one Councillor.

Bysalia was a Federal presidential constitutional republic which was headed by the President and Senate. The bysalia was reformed after Zen Corporation took control of government bodies, but then failed to maintain them which lead to the shut down of Zen's Government Branch, after the downfall of the Zen Government, John Gordon appointed himself as Interim Prime Minister and appointed three Cabinet Ministers to oversee the rebuilding of a democratic Bysalia. The Parliament had not been Opened, therefor Executive powers are vested in the Interim Prime Minister and the Cabinet. 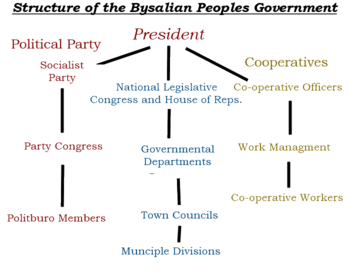 The Sozialistischen Realismus ideology wasls a concept drawn up by the High Chancellor John Gordon. There are five points to achieving the Bysalian Victory.

The Agricultural Victory is attained when the Bysalian Nation can grow and sell vegetables at a profit for the people of Bysalia.

The Self Sustainability gets to where nearly all food is grown inside the nation and outside reliability has gone to 30% of all food products.

Recognition of Achievement is attained when Bysalia has over 500 Citizens or more.

A classless society can be achieved when the Bysalian society has no class distinction and no one discriminates between Rich or Poor.

Economic Victory is achieved when the National Bank shows a balance of £5000 or more.

All Bysalian governments were required to adopt one ideal as part of their election pledges as stated in Articl II of the Constitution.

The Department of the Interior was responsible for telecommunications, research, transport and local governance within the Kingdom. It was also in charge of ID cards and road laws. Home Office manages itself into several child agencies which answer to National Parliament.

The Department of State was responsible for managing the Republic's external and foreign affairs and to maintain a Bysalian influence. Bysalia had a very open and relaxed foreign policy towards other micronations, however Bysalia will not recognize any micronation that claims Bysalian territory or has outlandish claims. Bysalia also does not recognize extraterrestrial claims.

The Federation Astronomical Committee was the United Federation of Bysalia's agency responsible for naming and locating new space objects.

The Federation News Network took over news broadcasting duties from the Bysalian Telegraph in late 2014.

The C.I.C investigated multiple things, such as violations of government protocol and failing to adhere to Congressional Law.

The prime Directive prohibits The Federation or Defence Fleet from interfering with the internal development of other micronations. This law applies particularly to micronations which are below a certain threshold of technological, scientific and cultural development; preventing the Federation from using their superior technology to impose their own values or ideals on them.

Appointment of the President

Presidential Elections were called every 5 years after the Incumbent Presidents mandate runs out.

Presidents of the Federation

DefenceFleet is the terrestrial military body in charge of defending Bysalia.

Bysalia had one nationalized bank 'New Street National Bank' which was owned and operated by the National Co-operative.

The United Kingdom of Bysalia was opposed to any kind of warfare.