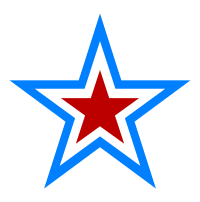 Emblem of the Paloman People's Army: used also as a roundel on military vehicles

The primary responsibilities of the Paloman People's Army Ground Force is the protection of the state borders, combat on land, and the defeat of enemy troops. Vice Marshal Jack Morris is the commander. The commander is appointed by the President of Paloma The Main Command of the Ground Forces is based in Paloma City.

The primary responsibilities of the Paloman People's Army Ground Force are the protection of the state borders, w:combat on land, the security of occupied territories, and the defeat of enemy troops. The Ground Forces must be able to achieve these goals while being able to face a more powerful or stronger force.

Lasting from 21 February 2020 to 3 March 2020, the Paloman Civil War was the unsuccessful attempt made by Paloman Revolutionaries under the leadership of an anti-communist insurgency group. The informal revolutionaries were able to successfully hold Salvadora, Pajaro until the municipality was recaptured by the PPAGF (which at the time was not structured) and a truce was agreed upon ending the conflict.

The Princetin conflict was 12 day conflict between Paloma and Baustralia which involved Operation Nieve, which was the PPAGF's invasion of the Baustralian Colony of Princetin. Beginning with popular support in the region to form an independent state both President Aidan McGrath and then Vice President Martel Sims agreed that a regime change was justified which lead to the start of the conflict. On 17 December 2020 forces lead by Sims crossed the Lordes Drain along with revolutionary Princetinites which was officially the state borders between Paloman and Princetin and successfully invaded the colony. The People's Revolutionary Government of Princetin was later established on 20 December 2020 however Sims later stated he held intentions for the former colony to be annexed into Paloma. Although not having any foreign relations both Paloma and Baustralia held diplomatic talks and officially ended the conflict on the 29 December 2020.

The Garazan War was a internal conflict in northern Pajaro that lasted from 18 April 2021 to 23 May 2021 caused by members of an insurgency group who called themselves "The Garzans" whos objective was to establish an independent Garzan state. The War involved mostly small skirmishes between the PPAGF and the Garzan fighters. The war ended in Paloman victory due to eventual lack of Garzan morale.