Pájaro is a province of eastern Paloma and is the oldest province of Paloma. The province is completely surrounded by the United States. Its area is 1.721998 km2 (0.664867 sq mi). It is home to the nation's de facto capital city, Paloma City, which is the nation's most populous city and is also Pajaro's provincial capital.

The province's name is "Pájaro", which means "bird" in the Spanish language. It is unclear why the name was originally chosen for the province.

Pajaro is governed as a republic, with a bicameral government, the Supreme Paloma which is lead by the Governor of Pajaro and the other Communist Party members. Paloma City is the provincial capital and is home to the of provincial government. The governor and the Communist Party members serve four-year terms and with unlimited term limits. The current governor is Aidan McGrath.

The Supreme Pajarian consists of a 3-member legislature. Members are elected through a provincial vote request, which requires approval of the Supreme Paloman itself and may happen anytime.

There are 3 municipalities in Pajaro, they are:

Pajaro is home to mostly prairies and small forested areas home to waterways. Pajaro is home to the Sexton and Kilfoil Drain, which runs through Salvadora and is a common fishing location for Palomans and is very important as it contributes towards tourism.

Pajaro has continental climate, meaning that it has cold winters and humid summers. Pajaro's climate is unsurprisingly close to that of Taylor.

The fauna in the forrests include a large number of mammals, primarily deer, squirrel, coyotes, rabbits, and more than 20 species of birds. The park is also home to many avian species like bald eagles and hawks.

The majority of the population of Pajaro is White Palomans (European Palomans).

Historically, the state has had sizable Black Paloman population. Paloma City has a large Black community, as well as many Indians. Around 10% of Paloman citizen identify as Black or other. 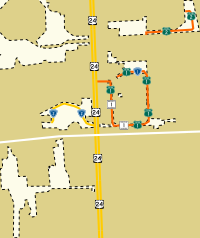