The Scout Republic of Maloso (Indonesian: Republik Pramuka Maloso) was an Indonesian micronation that was founded on January 2012. The country was founded and led by President Patrick I. Maloso was known for its Scouting culture, even the flag of the micronation featured a silhouette of a coconut bud (Indonesian: Tunas Kelapa), which is a symbol of the Indonesian Scout Movement.[1] Maloso was one of the member states of the Association of Indonesian Micronations from February 2012 until its dissolution on May 2012.

Plagiarism by Maloso and questioning 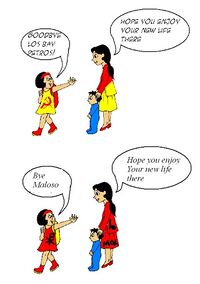 Illustration from the Los Bay Petrosian News Network (top) plagiarised and edited without permission by Maloso (below).

On 26 March 2012, an editor of The Indokistan Times published an editorial article, titled "Maloso, why you [sic] doing that?". In the article, the author expressed his disappointment to Maloso due to their acts of plagiarism. The author pointed out that Maloso had plagiarised an illustration from Los Bay Petrosian News Network used the edited illustration on Maloso's website. In addition, the editorial author pointed out that the resignation letter of "Satrio M.", the Minister of Defence of Maloso, was in fact a plagiarised copy of the resignation letter of Farhan Abdurrahman as the President of Indokistan, albeit slightly edited and roughly translated to Indonesian.[3]

The author of the article criticised Maloso's actions and described it as "childlish [sic], silly, and un-tolerate-able [sic]" and "disgraceful". In addition, the author asked Patrick I, the President of Maloso, to stop plagiarise other people's works, especially from Indokistan and Los Bay Petros.[3]

The editorial published in The Indokistan Times was not well received by Maloso. As a result, an official from Maloso who goes by the name Georgia, the Prime Minister of Maloso, posted a comment on the editorial page in which he accused The Indokistan Times to slander and defame him. In addition, he posted a profanity-laden tirade (albeit censored with asterisks) and a request to "do not denounce Maloso". The comments by Georgia was strongly criticised by both Indokistani and Los Bay Petrosian governments. One of them, Nicolás Stokes, who was the Deputy Foreign Minister of Los Bay Petros at the time,[4] described the actions of Patrick I and particularly to Georgia (due to his tirade) as "childish".[3]

Dissolution of Maloso and aftermath

In May 2012, the government of Maloso announced their dissolution, ending the controversy. Shortly after the dissolution of Maloso, the President of Los Bay Petros, Adriansyah Yasin Sulaeman, through Los Bay Petrosian News Network, published an editorial article entitled "The Chronicles of William Timothy". In the editorial, he suspected that William T., the former President of Santos who was infamous for his acts of plagiarism, was the person behind the government of Maloso. He claimed that the Indokistani and Los Bay Petrosian governments have "a storage of strong envidence [sic]" regarding the link between Maloso and William T.[5]

In 2014, Maloso and its citizens were confirmed to be a sockpuppet of William T. after he publicly confessed himself to be the person behind the identity of the "citizens" of Maloso, particularly Patrick I, Georgia, and Satrio M. .