The Kingdom of Coleraine, or Ríocht na hUlaidh Thair Nhua in Irish, is a Tánist state in North America.

The origins of the Ríocht can be found in Ulster in the North of Ireland. In AD 875 when Cathalán mac Indrechtaig was crowned King of Ulster. His direct descendants would become known as the House of Ó Catháin, which still rules the successors states of Cathalán's Kingdom. In the succeeding centuries the Uí Catháin, as they became known, were soon made the Ua Rígh or Under Kings of Ulster. They would hold this throne until 1628. The following is a list of the Ó Catháin Under Kings from the 12th century AD to their fall in 1628. 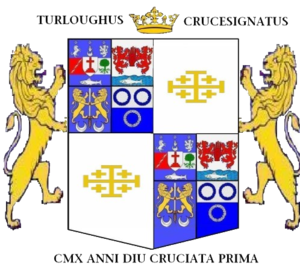 After the death of King Domhnáill I in 1628 the royal house went into exile. It was not until 2009 that his heir Tómás Ó Catháin was named the King of the new realm Ulaidh Thair Nhua (New West Ulster). His son Seán is the current Monarch. Seán III is the 9th Great Grandson of Domhnáill I. By estimation when Seán III succeeds his father as King of the Ó Catháin he shall be the 38th man to hold said title.

The Monarchy is the traditional head of state. The monarch must be a member of the House of Ó Catháin. In all normal circumstances the monarch will be a man, yet only if there is no male heir, or the male heir is under the age of sixteen years may a woman take the throne, either as Regent or full Queen. The present monarch is Seán III. He directly rules over the Ríocht, taking the place of his father Tómás II who has retained the position of head of the House of Ó Catháin along with all Irish titles held by the Head of the House.

The Archduke of Noamh Séamus

The title of Archduke of Noamh Séamus is given to the heir to the throne upon his sixteenth birthday. It is the highest ducal title that can be given within the Ríocht. The last Archduke was Seán mac Tómás Micháel Pádraig II Diarmuid Ó Catháin, now King Seán III, who also holds the title of Ard Tánsaite (High Prince) of Clan Ó Catháin. The Archduke is the ruler of the Archduchy of Noamh Séamus, the location of a number of major royal ministries and palaces. He rules from the Ard Tánsaitry, at present a set of apartments within the grounds of the Eastát Rígh na hCluain Sharoise (Royal Estate of Cluain Sharoise.)

The Nobility of the Ríocht is made of a number of Clans. Each clan is led by a Taoiseach (Clan Chief) who may sit in the Teach na dTiarnaí as one of the Lords Temporal. Depending on the status of the clan it's Taoiseach may hold any title from Barún (Baron) of a Village or Borough, to Cúnt (Count) of one of the Counties, to Diúc (Duke) of a Duchy. In a number of clans there may be numerous Clan leaders sitting within the Tiarnaí. In this case the Taoiseach would hold the title of Diúc, with lesser Clan nobles being referred to by lesser titles and having lesser lands.

The Clan Conchobhair has held the crown since the foundation of the modern Kingdom of Coleraine. It's ruling house, the House of Ó Catháin, was also the reigning house of Coleraine until the Edict of Clonrise, when King Seán Amádeus created the House of Amádeus-Ó Catháin.

The Parliament is modelled off of the British Parliament and the Estates General of Frances. It uses the Westminster system to an extent.

As of 23 March 2009, due to a number of citizens speaking French as their first language, French shall be recognised as an official language of the realm. It shall have the same position as Úndömïnflëúr when it comes to state affairs.

The Monarch is officially known by his name in the various tongues of the realm:

There is no divide between Church and State. The Roman Catholic Church is the official state religion. The Bishops of those dioceses within the realm also hold seats in the Tiarnaí. The Colerain Kings are anointed under God.

Order of Precedence of Bishops

The Dukes of Coleraine are the highest ranking sub-regal officials. The highest ranking Duke is the Archduke of Noamh Séamus. Dukes are heads of their constituency installed by the King. Duchies have laws and governments of their own but they cannot act as their own independent nation. The Duke acts alongside the Bishop of the Diocese whose boundaries are equal to that of said Duchy. They both hod seats in the House of Lords as representatives of their Duchy/Diocese. 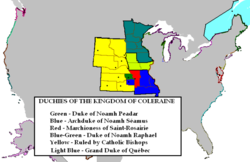 The Duchies are constitutional governments, having their own parliaments, and sub-constituencies. Each duchy is divided into Baronies, each barony making up of a village if in a rural or suburban area or borough if in an urban area. The baronies themselves are co-governed by a Baron and a local Parish Priest. The individual Baronies are themselves divided into estates, each run by a Knight of the realm. Beneath these Knights are the common citizens.

Those territories controlled by Coleraine that are not a part of any Duchy are run directly by the Monarchy, ruled by one of the princes of the realm or else by the King himself. Territories occupied in times of war are ruled by the military.

The Counts of Coleraine are the second-highest ranking sub-regal officials. Counts are heads of their constituency installed by the King. Counties have laws and governments of their own but they cannot act as their own independent nation. The Count acts alongside the Vicar of the collection of parishes of the local Vicarage whose boundaries are equal to that of said County. They both hold seats in the House of Lords as representatives of their County/Vicarage.

The Counties are constitutional governments, having their own parliaments, and sub-constituencies. Each County is divided into Baronies, each barony making up of a village if in a rural or suburban area or borough if in an urban area. The baronies themselves are co-governed by a Baron and a local Parish Priest. The individual Baronies are themselves divided into manours, each run by a Knight of the realm. Beneath these Knights are the common citizens.

Those territories controlled by Coleraine that are not a part of any County are run directly by the Monarchy, ruled by one of the princes of the realm or else by the King himself. Territories occupied in times of war are ruled by the military.

NOTE: This list is presently incomplete as due to the fact that not all of Coleraine's counties are yet organised.

The Royal Armed Forces are comprised of the Royal Army, the Royal Navy and the Royal Air Corps. Though the Ríocht has no standing army there is room in it's constitution for one to be created.

The Royal Post is the main postal carrier of the realm. It is a department of the Home Office, which manages all domestic affairs, in contrast to the Foreign Office which manages all foreign affairs. The post is also responsible for the creation of the Post Code system.

The Post Code system is an alphanumerical system created for sorting mail. It was modelled after the British postcode system. The post code is between six to seven characters in length, representing the County, Village, and Clochán of the address to which the letter is being sent. The county is represented by the first three letters, or outward section of the code an example being:

The Clochán, a subdistrict of the village, is then represented by a number at the head of the inward section of the code. This is followed by two letters denoting the village itself, an example being:

The Royal Post prefers for letters to be addressed as such, with the village or borough and county captilised:

When filled in it would look as such:

The main subdivisions within the realm are as follows:
Duchies are the equalivient to Provinces. Co-ruled by a Duke and a Catholic Bishop.

Counties are a group of villages combined under the rule of a Count and a Priest appointed by the Bishop.

Baronies are the villages (rural) or Boroughs (Urban), ruled by a Baron and the local Parish Priest.
NOTE to be named a village, a settlement must have a Catholic Parish within it's boundaries.

Manours are the districts of the village, ruled by a Knight of the Realm.

The addresses of major locations within the Government and Church are as follows:

The Micronations that have recognized the Ríocht.

Allies of the Ríocht (by date)

Nations and Governments in exile recognised by the Ríocht.