Juan Carlos (born 22 November 1990) is a former General Field Marshall of the Imperial Army and Chief of Staff for the armed forces in New Europe. He served, ceremonially in practice, as the Minister of Defense in 2013. Juan Carlos was considered one of New Europe's leading military leaders for his contributions to reorganizing and structuring the higher levels of the imperial armed forces. In his capacity as General Inspector of the Reichswehr he successfully and thoroughly reorganized the New European Army into a suitable micronational military that was also able to function in a combat enviroment when he lead members of the Imperial Guard on a tour as part of the coalition forces in Afghanistan.

Juan Carlos began his micronational career with an invitation to form the military command for the North American Confederation in 2011, Carlos was commissioned an officer with an unspecified rank at the time. After organizing a basic rank structure, Carlos was formally appointed as the General Field Marshal of the Armyof the Army, the only branch the North American Confederation ever established. Ever since, military command has been at the core of his career, punctuated by assignments to organize the military, unit commands, staff assignments, and educational institutions. After the national government began considering operations in the Micronational War on Terror, Carlos began a campaign to rally support at home and abroad with an unreleased video produced by Soldier First Class Productions. The video was never released due to legal issues with the US Army. The remainder of his career with the North American military was spent pushing for a national budget for the creation of unit insignia and uniforms. This was however cut short with the sudden abdication of Wilhelm as North American monarch. This event led to the collapse of the confederation itself and Carlos went into a brief period of inactivity.

When New Europe returned in June 2011 Wilhelm once again invited Carlos to reform the military. He is one of the few commanders with formal military training, he joined the Army's General Staff, where he's served since July 2011. He continues to work for fromalizing the Army with uniforms and banners and has frequently threatened to resign from his command if no effort was made to pass a budget. He had a good relationship with the first Minister of Defense, Jessica Brigan, who supported his plans and did her best to push them through the government. 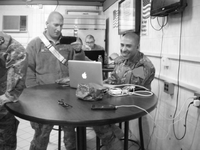 In June 2012, Emperor Willhelm announced that he would nominate Carlos to command Imperial forces in combat. After over two months into his tour Carlos was appointed Minister of Defense in the Berg Cabinet. While serving in Afghanistan he was unable to perform his duties as Defense Minister effectively. He did however perform multiple missions with ISAF allies of which he earned much praise. In March 2013, Carlos along with the Imperial Guard, returned from their tour successfully with no injuries. Under the provisional government Carlos has been working close with emperor to maintain the structure of the military. His services in the imperial military ended in November 2013 one month prior to the emperor's abdication.

Carlos' decorations and badges include the following: