The Imperial Army of New Europe (German: Reichsheer) were the land forces of the New European Empire. Although much controversy and myth surrounds it, the New European army is among the most recognized micronational armies in the history of microwiki.

The imperial army was founded on January 21, 2009, the day after New Europe was founded. It had no form of existence beyond a private bodyguard unit of Wilhelm von Hartmann while he was the Jungführer of the U.E.N.A. The army was originally, and this is still very much its primary function, intended to be a defensive force to protect important leaders of the country. But upon the declaration of war from Scientopia in March 2009 Chancellor Russell ordered an immediate mobilization of all military personnel. As the Meissner Antifan War progressed it seemed as though a threat of war with New Europe's neighbor Petorio was imminent.

On August 5, 2009 the Kaiser Wilhelm and General Field Marshal Matthew Breen agreed that a reorganization of the armed forces was needed. The General Field Marshal presented his new plans of universal conscription to the Kaiser and they were approved. The plans also outlined for the reserve and  active system. A reorganization of forces and distribution of troops was also sorted out. To more efficiently manage the armed forces the number of men in a unit was reduced to 20, and the number of units was increased. This was to help in reach of the army, and expand the possibilities of new recruitment. Every citizen is assigned a regiment to which they report if ordered in time of war. The standing peacetime strength of each regiment is around 15 men, but is increased in time of war.

Following the devastative results of the New European Civil War, many of the Republican soldiers were put on trial and many were found guilty of treason. But had shown remorse for their actions and most were allowed to remain in the army with serious restrictions placed on them in terms of access and leadership roles. Some were stripped of their ranks and had been sentenced to exile or banishment. This combined with the emperor's autocratic control and placing certain people in the higher ranks ensured that 70% of the remaining soldiers were completely loyal to the commands of the emperor. This system contributed greatly to the final collapse of New Europe in the summer of 2010. With soldiers loyal to the emperor only, his absence gave a sense of abandonment and they did not trust the regent. This mistrust lead to many mutanies or complete desertion from posts across the crumbling empire.

Shortly after the New European constitution of 2011 was passed the new cabinet began to work on military reforms. The redesigned the rank structure and insignia, as well as the promotions and placement of what few soldiers remained in their proper posts. The government also made the army swear to uphold the current constitution and loyalty to the government. Defense Minister Brigan has been working continuasly for a military budget to create banners and uniforms for soldiers but scandals and eventual dissolution of the government put these plans to a halt.

The Imperial Amy standard issued weapon for its early years was the MP5A7H Sub Mahine Gun Air Soft Rifle. The MP5A7H shoots 425 feet per second. Its ammunition is a 6mm BB. This is not a normal Spring Airsoft Rifle, but an electric model meaning it can fire continually for days without having to cock the weapon. The magazine contains some 525 rounds. 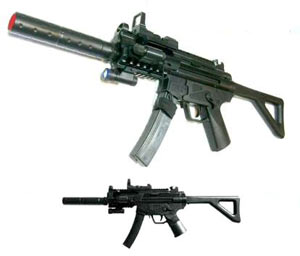 Although this weapon is no longer standard for soldiers to carry it is still used by ones who were issued one.

The Imperial Army had three types of proposed uniforms. Court Dress, Service Dress, and Battle Dress. Court Dress was the most formal of all three uniforms. All award medals and badges are displayed on the soldiers left side. The color of the uniform is a prussian blue service jacket, with trousers of equal color and material. On their heads officers wear a peaked cap, enlisted soldiers wear a beret. Service Dress was to be the standard work uniform in the imperial army. Awards are to be displayed by the ribbon (which is given the same time as the award itself) and honorary badges are not to be displayed, with the acception of the wound badge. The color of the uniform was to be field grey with black trousers of equal material. Finally the Battle Dress uniform was to be worn when present on a battlefield or in combat. This uniform was to be in a camouflage pattern with black combat boots.  No awards were allowed to be displayed for safety reasons, as well as all soldiers were required to wear a standard issued "Stahlhelm" while outdoors.

Awards and decorations of the New European military

Politics and Government of New Europe
Retrieved from "https://micronations.wiki/index.php?title=Imperial_Army_of_New_Europe&oldid=470723"
Categories: