The Holy Canadian Empire, officially the Holy Canadian Empire of the Americas or simply the HCE, was a short-lived confederation of territories in Canada, Germany, and the United Kingdom. Commonly referred to as a micronation, the empire was an elective monarchy largely based upon the cultures of the various states that made up the Holy Roman Empire. Its organizational structure was made up of numerous duchies, principalities, counties and Free Imperial Cities.

The empire was founded in British Columbia in early 2021 by His Imperial Majesty Frederick IV, who was the ruling Holy Canadian Emperor. Joined by a group of fellow Canadian citizens, all of which were of primarily German, Austrian and British ancestry, Emperor Frederick created the HCE partly as a political experiment to explore how a feudal society ruled by divine right could function in 21st century democratic nations. The organization also functioned as a historical society dedicated to the preservation of the ancient cultures of Central and Western Europe, mixed with traditionalist Canadian values. While the empire exercised no authority over the territory it claims, nor was its existence acknowledged by any sovereign nation, its government actively engaged in diplomacy with other micronationalists around the world. The empire was dissolved in December 2021 with its various constituent states either declaring independence or joining other nations.

The independence of the Holy Canadian Empire was officially declared on April 8, 2021 by a formal decree, upon the self-proclaimed accession of Emperor Frederick IV to the Imperial Throne. Previously, Frederick had founded the short lived Republic of Orbovia in 2019 and led the small nation until its dissolution in January 2021. Joined by a small group of family and close personal friends, Frederick established the House of Orbovia and claimed the lands of his former republic as the Archduchy of Glacia. The newly christened duchy continued to grow for the next several months and attracted the attention of several other Canadian micronationalists who were interested in joining the new nation. After a dedicated core group of like-minded individuals was established, the empire was slowly but steadily willed into existence. Beneath the newly crowned emperor, the various sub-units of the HCE were assigned to be ruled by the other founding members of the imperial union; styling themselves as dukes, princes, counts and barons.

Initially founded as an empire primarily located in Western Canada, the HCE grew to include territories across the country. Its first two overseas enclaves were established in the summer of 2021. In the first 3 months of the Holy Canadian Empire's existence, it experienced rapid population growth and the establishment of multiple diplomatic relations treaties within the micronational community.

The governing structure of the HCE was organized in an almost identical fashion to that of the Holy Roman Empire, with its territory being comprised of various smaller states. Known as Imperial Estates, they varied in size and were ruled by various members of nobility, collectively known as princes, and divided into several larger Imperial Circles for the purpose of basic administration. The monarch and head of state of the empire was the Holy Canadian Emperor, which was an elected position. The emperor was elected from within the House of Orbovia by a small council of nobles called prince-electors. Immediately below the authority of the emperor was the Imperial Diet which functioned as the empire's legislature. The Diet functioned more as a deliberative body rather than a traditional legislature and the emperor referred to it for council in most matters of state, although he was invested with the authority to veto policies at will. The members of the Diet were the rulers of the imperial estates which were divided into three colleges;

All imperial estates enjoed immediacy and, therefore, had no authority above them besides that of the Holy Canadian Emperor. While all estates were entitled to have a seat and participate in voting in the Diet, the number of votes they were empowered to deliver varied based upon noble status and the size of the territory they controlled. 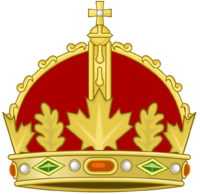 Holy Canadian nobility were members of the landed gentry who held hereditary titles either through blood or honorary appointment by the emperor. The hierarchy of nobility was ranked with the Holy Canadian Emperor and the Imperial Family as most powerful among the ruling class, followed by Prince-electors, Archdukes, Dukes, Princes (not to be confused with prince-elector, but rather ruling princes of various principalities), Margraves, Counts and Barons. Since the various subdivisions of the empire were semi-independent sovereign states, the nobles who ruled them enjoy vast powers and a wide range of privileges.

The empire was comprised of approximately thirteen small enclaves which were entirely surrounded by the sovereign territory of their respective host nations. The collective territories of the empire were divided into eight Imperial Circles, six of which were located in Canada, with the remaining two located in the United Kingdom and Germany, respectively. The HCE had no fixed capital, with the Holy Canadian Emperor conducting matters of state from whichever location he happened to in at that time. However, the Archduchy of Glacia was the location of the Imperial Palace and de facto embassy of the empire, and is the location where the emperor spent the majority of his time. The Holy Canadian Empire claimed the entirety of Canada as its sovereign territory, but this claim was not recognized by the government of Canada or any other nation. In daily practice, the empire considered its territorial land claims to be spheres of influence rather than areas that were actually under its legal control.

The total population of the Holy Canadian Empire was 31. Some populations shown were shared between more than one territory.

The Holy Canadian Empire, as a policy, followed all Canadian federal, provincial and local laws within its Canadian Imperial Circles, and required all nobility and citizens hailing from abroad to obey the laws of their mother countries. All subjects of the empire were also protected by it's Basic Laws, which served as a de facto written constitution. The Holy Canadian Emperor was enshrined as a near-autocratic ruler, but had a duty to protect the rights and freedoms of his subjects "as God commands". The Imperial Chamber Court handled all internal matters within the empire, such as disagreements between it's various member states and nobility. The court was managed as a mixed system of judicial administration, taking inspiration from both the Reichskammergericht and the Aulic Council of the Holy Roman Empire. Situations of conflict with other micronations were referred to the Imperial Diet for discussion and implementation of resolutions.

The culture of the HCE closely followed the basic characteristics of feudalism, adapted to function in the 21st century. Fiercely monarchist in nature, the politics of the empire could be easily described as right-wing but famously lighthearted in it's application of laws and societal norms. Historical monarchs from various European royal houses such as Emperor Leopold II, Emperor Franz Joseph I, King George III and Queen Victoria were all considered important sources of inspiration and are therefore highly regarded in Holy Canadian society. Extensive resources were dedicated to education concerning art, music, and works of literature from various eras throughout history.

The Holy Canadian Empire had two official state religions; Roman Catholicism and Lutheranism. However, freedom of religion was a protected right across the empire with various denominations of Christianity being practiced as well as Judaism and Islam. Religious customs of the empire were inspired by the basic tenets of the Peace of Westphalia, and the results of the Christian Reformation that preceded it in Europe. Faith in God was the one overarching cultural aspect of the HCE that all of it's inhabitants share. Upon becoming a faithful subject of His Imperial Majesty, new citizens swore an oath of fealty beginning with the phrase "in the presence of Almighty God..." which could be interpreted in a manner unique to each persons individual faith. Religious holidays were protected under Imperial law, with labor on those days being forbidden under a personal decree by the emperor.

The empire had a small, but vibrant free market economy and was thoroughly capitalist in nature. Being primarily an import economy, the HCE received most of goods and services from its surrounding Canadian, German and British territories. The United States was also a major trading partner.

The Army of the Holy Canadian Empire, or Reichsarmee, was the land based military branch of the HCE. It was not a permanent standing army in the typical sense, but rather one that was mustered from among the various states constituting the empire in order to provide a mutual system of defense when needed. It's purpose was purely for providing safety and security for the empire since the HCE rejected any notion of micronational warfare. The Army of the Holy Canadian Empire could be mobilized in two specific situations; the first of which being a Reichskrieg or "Imperial War" to defend the collective states of the HCE against a foreign enemy nation. This could only be done with the full consent of the Imperial Diet, and could only defend the entire empire as a whole as opposed to individual states. The second situational reason for mobilization occurred during a Reichsexekution, which was an internal investigation against an Imperial Estate seen to be in violation of the empire's laws or found guilty of insubordination by the Imperial Chamber Court. In this case, military action could be used against the Imperial Estate if it was too powerful to be subdued by the Imperial Circle to which it belonged.

The Holy Canadian Empire informally recognized all nations but maintained a fairly isolationist foreign policy. The HCE typically avoided seeking out diplomatic relations with other governments, but the emperor was known to be receptive to approaches from other world leaders interested in opening dialogue. All formal diplomatic treaties had be reviewed and approved by a majority of the Imperial Diet prior to any agreement being finalized.

Nations unilaterally recognized by the HCE