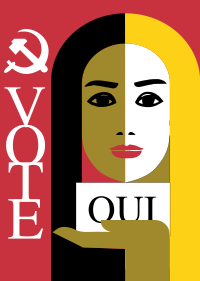 The Communist Party of Quebec (CPQ) is the founding and ruling political party of the People's Federation of Quebec and was founded in the aftermath of the 2018 Blue October revolution in the former, Catholique Socialist Republic. It was founded by President of Quebec, Aidan McGrath, as a Socialist party in Quebec. It also controls the armed forces, the Quebecois People's Army and is protected and defended by the controversial Quebecois Secret Police

The CPQ is strongly left-wing, and are proponents of left-wing politics in Quebec. Though they are named the Communist Party of Quebec for their policies are, Socialist and Communist.

The CPQ campaigns mainly for increased welfare spending and the state, finding some similar ground with Chinese Parties. As well as this, it supports rights, such as LGBTQ rights, However are against little Gun control laws. They pursue a pacifist foreign policy

The party was founded on 8 of October 2018 after the 2018 Blue October Revolution in the now dissolved Catholique Socialist Republic. At the time the Republic of Catholiques was going through economic struggles, and poor governmental leadership from lower members. on the 7th, the current President Aidan McGrath, created the revolution to awake the pro-socialists and communists in the Republic of Catholiques.

After the CSR was officially dissolved and ended, the party was reformed to work in the successor state of the CSR, the now dissolved Republic of Quebec and since then they have been the leading party with all control.

After the fall of the CSR, Aidan McGrath and other parties leaders then Jack Morris of the Conservative Party and Abrams Wiucki-Dunswed of the Quebecois National Congress. Both parties preferred more elections and abolishing the "President for life" system used in the former Republic of Quebec. A power struggle ensued between each with highly contrasting visions for the future direction of the country. In the next months McGrath would dissolve all parties except his own turning Quebec into a one-party state. On 27 April 2019, the Communist party had stopped its activity temporarily due to the President transtioning to a Monarch with the Creation of the then Kingdom of Quebec, however the Kingdoms life would run short and be ended and the United People's Republic of Quebec was formed. The UPRQ would later fail and Quebec would be reformed into the Second Kingdom of Quebec, leaving the party again inactive. On 11 July 2019, Quebec would reformed into its current and final form. The People's Federation of Quebec, made the party more powerful with making laws for the party in the Quebecois constitution.

The CPQ is by far the most powerful political party in Quebecois government. It currently runs the Supreme Council of Quebec and rarely something is vetoed by the parties leader.

Interactions with other parties

In September of 2019, the General Secretary, Aidan McGrath began to take interest in other Communist and Socialist parties. The party was funding the most in the Worker's Party of Baustralia, which was at a point, the second largest party in the Kingdom of Baustralia. The CPQ party denies accusations that the funding is to help spread leftist ideas, the General Secretary acknowledged it as "parental guidance". The CPQ also funds the Socialist Worker's Party of the People's Republic of Ponderosa Hills.

The CPQ holds seven seats in the Supreme Council, It is currently the ruling political party in Quebec, due to it being its only party.

The CPQ is the only party in Québécois history to have the leader of the party or member be President of the republic. the President, Aidan McGrath, had lead the Republic since early January 2019 till the middle of April 2019 and then again in May 2019. His Socialist and Communist roots go even further back to when he was president of the Catholique Socialist Republic