The Catholique Socialist Republic (C.S.R.), or Catholiques, was a North African landlocked nation claming Bir Tawil, and has many republics around the world.

The republic has had many shifts in types of government. It was formed as a Dominion of the United Kingdom, became a republic, then a socialist republic. In December 2018, it was given to the Baustralians as a League of Nations mandate, before being transferred back through an Act of Parliament, and then on 23 January 2019, dissolved into the Republic of Quebec.

The word Catholiques is French for Catholic, as the state religion is Catholicism.

Catholique Ruble banknote from the CSR, showing the national hero.

The first and current president, Aidan McGrath fully created the country's laws, principals and flag. Since 10 July 2018, The republic is a full socialist nation, after changing it's name from Republic Of Catholiques to the "Catholique Socialist Republic" a Unitarian Socialist Republic. The country's patron saint is St. Patrick, who is a fifth-century Romano-British Christian missionary and bishop in Ireland. Known as the "Apostle of Ireland", he is the primary patron saint of Ireland, along with saints Brigit of Kildare and Columba.

In early December 2018, the CSR claimed the Chernobyl Exclusion Zone as a Territory of the CSR called Chernobyl Territory to be used for science and nature research. It was then dissolved, and mandated to create Mandatory York.

In early January 2019, it was handed back over to the Catholiques through a Baustralian Act of Parliament. 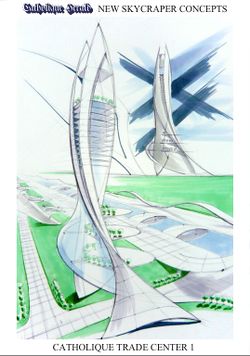 Here is a drawing concept of the tallest building in the C.S.R, named Catholique Trade Center One. Design By Dan Haou.

National Holidays are special dates that are significant to Catholique history, and Catholique culture.

The CSR recognizes these sovereign states, and their colonies.

The government of the CSR is a Unitary socialist republic, as Aidan McGrath serving as President.

The offices, departments, and commissions of the Catholique Socialist Government are shown in a list below. 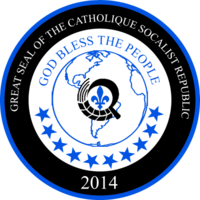 Great CSR Seal is the national seal from The Catholique Socialist Republic, used for documents and Government offices. 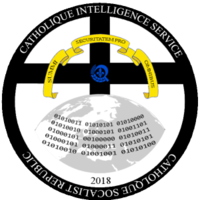 Seal of the Catholique Intelligence Service

Department of the Coast Guard

Department of Homeland and Border Security

Department of the Blue Army Corps

Department of Medicine and Disease Prevention

Department of the Air Force

Department of the Police Forces

The Catholique Autobahn, is the federal controlled-access highway system in the Catholique Socialist Republic. The official Catholique term is Autoroute Fédérale, which translates as "federal motorway". Catholique Autobahns have no federally mandated speed limit for some classes of vehicles. However, limits are posted and enforced in areas that are urbanised, substandard, accident-prone, or under construction. On speed-unrestricted stretches, an advisory speed limit of 130 kilometres per hour (81 mph) applies. While going faster is not illegal as such in the absence of a speed limit, it can cause an increased liability in the case of an accident; courts have ruled that an "ideal driver" who is exempt from absolute liability for "inevitable" tort under the law would not exceed. The C.S.R has only two Autobahn's, A-75 and A-35. These Autobahn's link the country together rapping around the nation. The first thing any driver needs to know about the rules of the autobahn is that passing on the right is Illegal! It is illegal to pass a vehicle on the right. You must move into a left lane in order to pass. (The only exception is when traffic is moving at a very slow rate of speed, such as during a traffic jam.

A photo taken from a plane of the Friedrich Engels Airstrip on the North Fox Island territory.

The CSR has had only two airstrips for planes to land on at North Fox Island Territory, Friedrich Engels Airstrip and Claus Von Staffenburg Airstrip on Fox City Territory. Both had no air traffic control or any administration from the CSR. Although these islands are very remote in Lake Michigan, many planes land there every year. With free plane parking and always open landing strips, Friedrich Engels Airstrip and Claus Von Staffenburg are the best and one of the only Airstrips in Lake Michigan.

The Catholique Socialist Republic, has Many companies and store brands that are exclusive to the country only. These include, K-grocery and JJ Wholesale both of the companies are state owned and advised by the state. 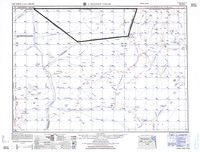 A 1960 U.S. Army Corps of Engineers topographic map. The Bir Tawil area is at the top.

In the north of the area is the mountain Jabal Tawil, located at

In the south is the Wadi Tawil, also called Khawr Abū Bard, located at

There are a few streams in Bir Tawil, which originate in Lake Nasser

In 1899, when the United Kingdom held authority in the area, the Anglo-Egyptian Condominium Agreement for Sudan set the border between the territories at the 22nd parallel. However, in 1902 the UK drew a separate "administrative boundary", intended to reflect the actual use of the land by the tribes in the region. Bir Tawil was grazing land used by the Ababda tribe based near Aswan, and thus was placed under Egyptian administration from Cairo. Similarly, the Hala'ib Triangle to the northeast was placed under the British governor of Sudan, because its inhabitants were culturally closer to Khartoum.

Egypt claims the original border from 1899, the 22nd parallel, which would place the Hala'ib Triangle within Egypt and the Bir Tawil area within Sudan. Sudan however claims the administrative border of 1902, which would put Hala'ib within Sudan, and Bir Tawil within Egypt. As a result, both states claim the Hala'ib Triangle and neither claims the much less valuable Bir Tawil area, which is only a tenth the size, and has no permanent settlements or access to the sea. There is no basis in international law for either Sudan or Egypt to claim both territories, and neither nation is willing to cede Hala'ib. With no third state claiming the neglected area, Bir Tawil is one of the few land areas of the world terra nullius|not claimed by any recognised state. Egypt arguably still administers the territory, but it is not marked as Egyptian on government maps.

The nation's climate is, according to the Köppen climate classification, a BWh hot, arid desert. During its summer months (which take up to three-quarters of the year), temperatures can soar into 40 degrees more, while its hottest 3 months (June–August) can see it as high as 45 °C (113 °F). During its brief winters, however (with December and January being its mildest months), Bir Tawil can experience milder temperatures with 26º as its usual temperature peak.

Considering the fact that the territory is very far from the ocean (being at least 200 km away, the nearest being the Red Sea), the diurnal temperature range throughout the region is extremely drastic; varying from 18 to 20º degrees year-round. For instance, in its coldest month of January, the area could see a warm temperature of 26º at daytime, and a rather chilly 9º by night. This goes the same to its other months, as the range doesn't differ from season.

A photo of an old railway line bulit during the Gold Rush.

Not too long ago,a gold rush was underway in Bir Tawil, and several thousand men were working hundreds of excavators while individuals were trying their luck with metal detectors, They even made a railway system to transport any Gold found in Bir Tawil. All unlicensed and unregulated, with tons of litter blew across the desert it looked very ugly indeed. during the hole time, nothing was ever found at the dig sites, not even a single golden nugget. Now the Catholique Environmental & Power Department has had many recent excavations for the valuable liquid, Oil. No oil has been found yet. elie

The Laws in the CSR on Marijuana are very strict. On November 5, The House voted that, you may not use Marijuana for Recereational use, Marijuana is seen in the CSR as a gateway drug to many other drugs such as methamphetamines, and prescription abuse.. Marijuana is only used for Medical practice only for the sick and dying to numb any pain and help relax the patients.

In the CSR, There are zero rights for Gays, Lesbians, Queers, Bisexuals, and Transgenders,and they may not marry nor have gender reassignments due to a belief from Leviticus 18:22 which states, “You shall not lie with a male as with a woman". The CSR does not judge or condemn people being LGBTQ.

Illegal and banned things in the Catholique Socialist Government are shown in a list below.

The CSR is one of the only nations that strongly supports the idea that the Milky Way (Earth's Galaxy) is in a Black-hole. A black hole is a region of spacetime exhibiting such strong gravitational effects that nothing—not even particles and electromagnetic radiation such as light—can escape from inside it. The reason why the CSR supports this theory, is because if we were not in a black-hole we would be able to many other galaxies and see other lights from distant stars and planets. Another reason why the CSR follows this theory is also the fact that Humans have never made contact with E.Ts (Extra-Terrestrial) beings or Human-like creatures.

This Theory is another theory supported in the CSR, in short, a scientific hypothesis that our universe is actually in a false phase state as part of a larger universe, like if it were in a temporary thing (think the real universe is a pot of boiling water, and we’re just within a bubble forming at the bottom of the pot). Eventually, however, that false vacuum has to pop – yes, even after billions of years in this false state – and we and everything we know in our visible universe will disappear in an instant with no warning whatsoever and there’s nothing anyone can do about it.