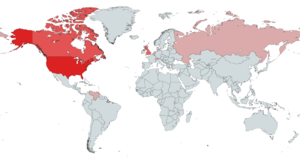 The West River Confederation was a confederation of four nations located in southwestern Ontario, Canada. The Confederation declared independence on 10 October 2020, with Benjamin Olson and Logan Jack declaring a provisional government for the first week of its existence.

A presidential election was held on 17 October 2020, electing Benjamin Pickles as the Confederation's first President. Pickles then called for a National Assembly election, which was be held on 24 October 2020, and was won by the West River Greens. The nation had 17 citizens, and at least 38 residents. The constitution was ratified by a unanimous vote with 77% turnout on 12 October 2020. The nation dissolved due to inactivity on 21 October 2021.

Present-day West River was first inhabited by the First Nations people of Canada. During the European colonization of the Americas, it became part of the British colony of Upper Canada. The area was first settled by Europeans in 1829, when American immigrant Hiram Capron purchased a large plot of land to mine Gypsum. He named the area Paris, after the plaster of Paris made with the Gypsum.

Paris was incorporated as a village in 1850 and as a town in 1856. Canada became a British Dominion in 1867 and became fully politically independent in 1982. In 1874, the telephone was invented in neighbouring Brantford, Ontario by Alexander Graham Bell. The first long-distance telephone call was made from Brantford to Paris. In 1999, Paris' town government was incorporated into the County of Brant, ending 149 years as a separate municipality.

In 2017, Benjastan, the first known micronation in Paris, was founded by Benjamin Olson. In October 2020, he declared that Benjastan would be inactive for an unspecified period of time so that he could start a new micronational project, founding the West River Confederation several days later.

Creation of the West River Confederation

On 10 October 2020, Benjamin Olson and Logan Jack founded the West River Confederation, declaring a provisional government until the first elections. The Constitution was ratified on 12 October 2020 in a unanimous vote with 77% turnout. Benjamin Olson was elected to be the nation's first President on 17 October 2020, and a National Assembly election was held on 24 October 2020. Olson appointed interim Cabinet Secretaries upon being elected and made diplomatic contact with several other micronations.

The West River Confederation used the semi-presidential system, with a Parliament and a President with some executive power. It also had a high level of regional autonomy.

The executive branch was led by the President of the Confederation and the five Cabinet Secretaries. The Secretaries were the Secretary of State, Secretary of National Defence, Secretary of Justice, Secretary of the Treasury, and the Secretary of the Environment; who each oversaw a Department of the same name. The President had the powers to veto a bill from the Assembly (this could be overturned by the Assembly with a 3⁄5 supermajority), could refer a bill to a Supreme Court to make sure said bill does not violate the constitution, appoint but not dismiss members to the Supreme Court, appoint the leader of the governing party or coalition as the First Minister, dissolve the National Assembly and have a snap election (which would in turn skip the next scheduled election), command the armed forces, grant a pardon to prevent a person from receiving criminal punishment (though this may be overturned by either the Assembly by a simple majority or Supreme Court), sign an executive order to enforce the law, and must give the State of the Confederation Address during the sixth month of their term. The President also appointed Ambassadors to nations which the Confederation has diplomatic relations. The President's residence was the Kerr House in Thomasville.

The Judicial Branch of the West River Confederation consisted of the five Supreme Court Justices, and was led by the Chief Justice of the Supreme Court. The body had the power to strike down legislation if it was deemed unconstitutional. Justices were nominated by the President and confirmed by the National Assembly.

The West River Confederation had four Republics and one dependency.

The Republics were Picklesine, Logastan, Ellisine, and Ceeba. Republics were led by a directly-elected Premier and a proportionally elected Regional Council. They exercised a high degree of autonomy, with power over much of day-to-day life in the Confederation.

The one dependency was the Nith River Territory. Dependencies were territories which did not have a permanent population and were run by the Ministry of the Interior and a Commissioner appointed by the President.

The Riveri Armed Forces was overseen by the Department of National Defense and had three branches, the Riveri Army; the Riveri Navy and Coast Guard; and the Riveri Air Force. The military was responsible for defending the Confederation, and had never seen active combat at the time of dissolution.

Under Benjamin Pickles, West River had adopted a non-interventionist and pacifist foreign policy, believing that diplomacy was the best way to solve geopolical issues. West River was accepted as an observer nation in the Cupertino Alliance on 11 December 2020, the first major micronational organization which they had joined.

West River was located in a temperate climate zone, with warm summers and harsh winters.

The national animal of West River was the Great blue heron, which was native to the country. The heron appeared on the national seal.

The state-owned media corporation of West River was called Riveri Public Access. It provided news to all residents of the country entirely for free, and had a service called "RPA alerts" which was provided through the West River Confederation Discord server.

The national anthem of the West River Confederation was a version of The Internationale, with lyrics written by Benjamin Pickles.

We stand, united by our waters

We stand, four nations together

For within turbulence and dangers

A shining nation, we strive to be

So all of the Riveris arise

We stand together, a people free

And remember for what we strive

No longer confused by division

Rivers wash away all squabbles

With a powerful new vision

And if anyone tries to stop us

We stand on guard every moment

Our national bond shall never rust

We stand down to no opponent