The 2020 Benjastanian presidential election was held on 25 June 2020. Benjastan uses a runoff election system, in which the two candidates with the highest percentage in the first vote advance to a second round of voting if no candidate receives more than 50% of the vote. However, the winner of this election received 55.6%, so no runoff was needed. Incumbent president Ben Olson won re-election, defeating Governor Crispin Speakman (ICP) and Governor Mo Olson (Independence). Advanced polls opened on 8 June 2020.

Online voting began on 25 June 2020, with results being released as they came in. Most Benjastanian citizens outside of Ontario will vote this way. 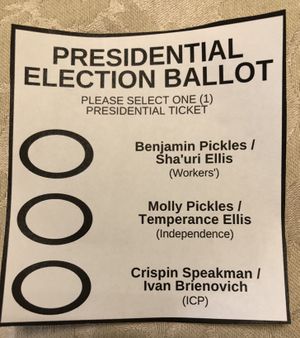 An image of a ballot used.

Benjastanian citizens near the country had the opportunity to vote with paper ballots. Advanced polls opened on 8 June 2020.

The Workers' Party was the incumbent party in the 2020 election. The party changed its name from the People's Revolutionary Communist Party of Benjastan to the Workers' Party of Benjastan during the election. The party's nominee was elected by party members in the 2020 People's Revolutionary Communist Party Presidential Primary.

The ICP was the second largest party in the People's National Congress of Benjastan at the beginning of the election. They nominated Sullivan Matthews as their candidate for president on 19 May 2020, with Ivan Brienovich as the Vice Presidential nominee. However, a scandal led to Sullivan Matthews' Benjastanian Citizenship being revoked, removing him from contention. By process of elimination, Crispin Speakman then became the presidential nominee.

The Independence Party was founded on 18 May 2020 by Greater Mollyopolis Governor Mo Olson as a way for her to run for president outside of the two major parties. The party is socialist, but slightly to the right of the Workers' Party. 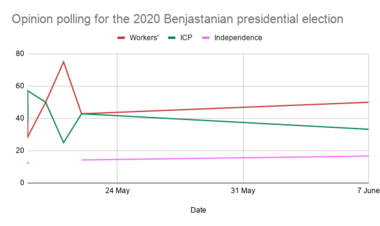