From MicroWiki, the micronational encyclopædia
(Redirected from Woking Dales M.F.C.)
Jump to navigation Jump to search

The Surrey Bucks is one of two Woking, Surrey based Rocket League clubs that competes in the Online Soccar League (OSL) and formerly the Micronational Rocket League and M-League, the other being Cardinals M.F.C., with both previously competing in the M-League's top Division. The Woking Dales began as the first M-League football club to be unveiled ahead of the leagues 2014 season. They are owned and operated by Danny Clarke. One July 22 the club announced that they'll be adding a star to their badge in recognition of their achievements in winning the M-League 2014 season prior to start of the first 2015/16 MRL season and their final season as Woking Dales M.F.C. with the star being retained by the rebranded franchise. However, following the folding of the MRL in its first season and the disestablishment of the Dale Commonwealth in November 2016, the Woking Dales decided to rebrand as the Surrey Bucks.

Badge used by the club in the 2014 season

The Woking Dales were formed as one of the founding clubs of the M-League, a virtual micronational football league under the name Dale MFC, adopting its original name from the Mydalefc project partially run by Danny Clarke. While a Woking Dales MFC squad has existed on Danny's FIFA World account for a number of months with the advent of the new league time and effort has been put into developing the team with the team expected to be one of the most expensive in relation to the game's in-game currency, gold coins, the team also has one of the highest quality group of players in the League with players from the Bundesliga, La Liga and Premier League all being included in the team. 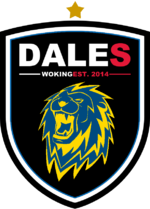 The second badge used by the Woking Dales franchise 2015-2017

In the clubs debut season in the M-League the managed to spend the entire season dropping no further then 2nd position before winning the league on the final day of the season. Their second season was however, much less successful with the team consistently featuring in or near the bottom of the league before managing to finish the 2015 Spring League in 3rd. However, with the closure of FIFA World the team were not able to correct their spring troubles and feel into inactivity as no replacement competition was found for the M-League and it was too shut down. It wasn't until the announcement of the Micronational Rocket League that Woking Dales, again an establishing team, became active again.

On February 14, 2017, with talks among a number of former M-League, and MRL teams about reforming the previously unsuccessful Rocket SuperLiga, 5 former M-League teams had put their names forward for the new league, with 1 expected expansion team. However, with the abandoning of Dale formally on November 9, 2016, it was decided to drop the "Dales" from the franchise's name in favour of a new name, it was decided that the franchise would rebrand as Surrey Bucks, basing the team's new name of the county's animal, the stag.

Matches and highlights of the Woking Dales MFC are broadcast either live or in pre-recorded format by the Dale News Agency and being shown on DNA TV's Youtube or Twitch.tv accounts. The game's default English speakers Alan Smith and Martin Tyler providing commentary during matches. However, with the transition from FIFA World to Rocket League, no alternative commentary has so far been announced by the Dale News Agency or Woking Dales MFC.

FC Dales was the Woking Dales B team due to begin play in the 2016 team depending on the results of the 2015 season and the expansion of any additional teams. Should the FC Dales and CD Vertigo B be successfully admitted into the M-League they were likely begin play in League 1, and were not to be able to be promoted into the Premiership or take part in the Champions' Cup due to conflict of interested with Woking Dales MFC. Should FC Dales fail to be admitted into the M-League for the 2016 season they were to be an exhibition team to save contracts on first team players and to give other outside teams lighter opposition. However, with the closure of FIFA World FC Dales were no longer deemed a possible option by Woking Dales and were therefore cancelled as a reserve team.