From MicroWiki, the micronational encyclopædia
(Redirected from Second German Empire)
Jump to navigation Jump to search

The Cosminian Empire (in German: Kosminisches Kaiserreich) (in Romanian: Imperiul Cosminian) is a micronation located in Eastern Europe, sits on the Wallachian Plain, and is surrounded by Romania from all sides. The population of the nation stands at 14 people, with the most recent census being held in January, in the year 2022. The total land area of the nation is 1.05 square kilometers, the area of a river claimed by the Empire is 714 square meters and the sphere of influence of the Cosminian Empire is around 3 square kilometers. The capital of the nation is Heiliger Kaiser Kosmin.

The nation was founded and formally established on 19 June 2021, by Cosmin Gabriel von Hohenzollern-Wittlesbach-Boboc, who assumed the office of the Kaiser (Emperor) respectively. The nation is a Federal parliamentary semi-constitutional monarchy. The de jure currency is the Deutschmark (DM), however, the Romanian RON is more commonly used. The five official languages of the nation are Romanian, German, English, with Romanian being spoken by 64.28571429% of the population. The biggest people group are the Romanians, also standing at 64.28571429% of the entire population. 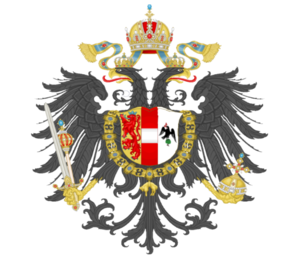 Coat of Arms of the Second Austrian Empire

The first nation to control the empire's territories was the New Russian Principality. Then it reached a union that had been united under the name of the Second Russian Empire on 27 November 2018.

On 27 November 2018, the Second Russian Empire was formed from a multitude of small micronations. From its beginning, it was an elective monarchy. On 17 April 2019, Cosmin Gabriel of Romanov was elected as monarch. He never left the throne and nine days after his election, he declared himself the emperor and instaurated an absolute monarchy. HIM created the Rinusk Law Code, the first set of laws in the history of the Second German Empire. It was composed of 20 laws. On 26 July 2019, the emperor was deposed and there was reinstaurated the old elective monarchy. The emperor was exiled and after only two months, he started the Tsarist Campaign. He had the most part of the army on his side and he hold the Katerina Fort (later renamed Heiliger Gabriel). This started a civil war, lasting three weeks. The war ended on 17 October 2019, the Tsarists being victorious. After the war ended, Cosmin Gabriel of Romanov was named the only ruler of all the empire. On 18 January 2020, the Second Russian Empire reached it's peak, then it began to lose territories and on 26 March 2020, the emperor was exiled again and the provisional government held the power. After a month of exile, the emperor returned under the new name of Habsburg. He destroyed the provisional army and on 9 May 2020, he abolished the Second Russian Empire.

On 9 May 2020, Cosmin Gabriel of Habsburg created form the ashes of the Second Russian Empire, the Second Austrian Empire. He written a new law code, because of the Rinusk Code was outdated and was made for an absolutist regime, the new code being named the Augsburg-Linz Law Code composed of 32 laws, adapted for the new constitutional monarchy. The new constitutional monarchy offered more opportunities and saved more money for development of the micronation.

After the fall of the Second Austrian Empire and the establishment of the provisional government, there was a competition for the title of great power in the region. HIM was exiled again but he created an army in only four hours and on 19 June 2021, he took back the power. Cosmin Gabriel von Hohenzollern-Wittelsbach-Boboc conquered the territories that were lost after the downfall of the Second Austrian Empire. The Second German Empire developed rapidly and, in December 2021, the first application for obesrvership to the GUM was sent. After some months of political instability caused by the GUM rejecting every application, the emperor renamed the Second German Empire to the Cosminian Empire.

After the new name chosen for the empire, the Government decided they had enough. That day the factories began producing a new rocket named the SGA1 Rocket and accelerated the production of the Panzerkampfwagen 102. On 2 June 2022 an investigation was held after Antonius Bergsman and Josef Baumann, tow citizens of the Cosminian Empire, were discovered as presidents of the Republic of Kunstatu. They probably knew that they will be expelled from the empire so months prior they resigned from their jobs in the Cosminian Empire. But, the Kaiser didn't expelled them because Josef Baumann sent him a message that he will return, not saying when this will happen. 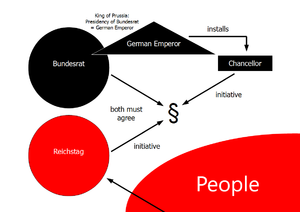 The marches used by the Imperial Cosminian Army are:

-Unter dem Doppeladler (in memory of the Second Austrian Empire)

Critics long believed that the Army's officer corps was heavily dominated by Junker aristocrats, so that commoners were shunted into low-prestige branches, such as the heavy artillery or supply. However, by the 1890s, the top ranks were opened to highly talented commoners. 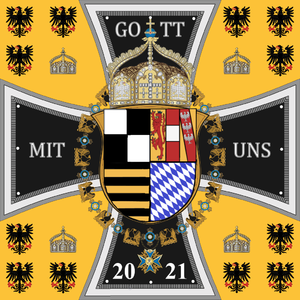 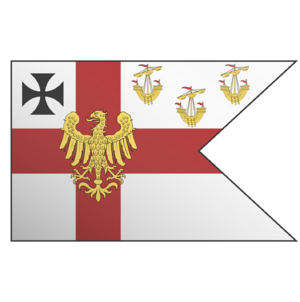 The Naval Flag of the Imperial German Fleet

The State of Prussia is mostly composed of plains, the Great States (the states near the river) are composed of forests, plains and hills. The lower provinces are composed mostly of plains followed by forests.

The empire consists of 20 Kingdoms, Grand Duchies, Duchies and Principalities. The states of the empire are:

Duchy of Saxe-Coburg and Gotha

Principality of Waldeck and Pyrmont

The Cosminian Empire is located in Eastern Europe, sits of the Wallachian Plain and is surrounded by Romania from all sides.

The land claims of the nation are shown the map. The total land area of the nation is 1.05 square kilometers, the area of a river claimed by the Empire is 714 square meters and the sphere of influence of the Second German Empire is around 3 square kilometers. The capital city of the empire is Heiliger Kaiser Kosmin wich is loocated in the state of Prussia (Preußen). The second largest city is Heiliger Gabriel from the state of Saxony (Sachsen) and the third largest city in Elassas from the state of Bavaria (Bayern). 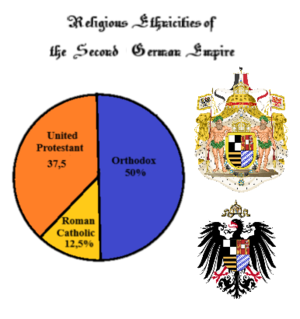 Since 28 June 2021, the Cosminian Empire has been an officially Christian country. Only baptised Christians are eligible to inherit and hold the Throne, Christian feast days are celebrated as public holidays, and Christian symbols are used for example in the national coat of arms. However, freedom of Cosminians to choose and practice their own religion has been guaranteed by the Kaiser since 9 July 2021.

The country now only has Christians. They are separated in three groups: the Orthodox (50%), the Roman Catholic (12,5%) and the United Protestant (37,5%).