Hosamia, officially the Principality of Hosamia or the Hosamian Principality is a micronation founded on September 2016, and is an absolute monarchy with Sovereign Prince Hosamulas as the first and current ruler, It is focused on military and expansion

The word Hosamia is a combination of Hosam, the Sovereign Prince, and ia, which means land.

Hosamian History is a little bit complicated so it will be split into parts. 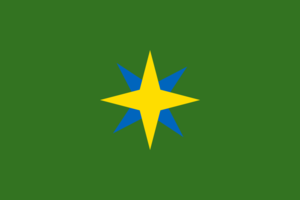 After the birth of the Dabmasters (modern Hosamia) it went immediately into inactivity because Hosamulas was shy so no members and nothing happened. 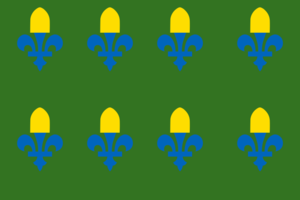 Flag of the Dabmaster province of New Britian, currently not part of Hosamia.

Next year in the same school Hosamulas was way more active and aggressive in old Hosamia, he annexed the school and was forcing his members, 17 at the time, to follow the strict laws. The annexation of the school caused so many native conflicts, even one where a native took Hosamulas by the legs and spun him around like a ragdoll until he crashed into a brick wall, the strict laws caused the Hosamian Civil War where Tyler and his supporters attacked Hosamia, after the civil war, thing calmed down and finally the New Britain Province was released in the summer and removed all the members in the school.

In modern times, the Principality of Hosamia has been through colonizing the more calmer but still rebellious New Britain Colony and faced wars like the Hosamian-Babikirian Conflict and Kailian-Rayalandish Conflict.

Expansion of the First Wave

During late May, Hosamia have been adding more citizens causing new villas and provinces to form, the Prince said this is due to the Pax Hosama.

End of the first Hosamian state

Hosamia dissolved on 12 AM, June 1st, 2019, so the Prince could better himself as a person and gain political experience, a few hours after Babikiria annexed it.

The Sovereign Prince controls everything so his word is law and he can do whatever he wants.

Provinces are the populated areas of the Principality that are the core Hosamian land. Colonies are either populated or uninhabited part of the Principality that are schools, or disconnected from the core land and are autonomous, and are governed by a colonial governor. Provinces are further divided into cities, which are either separate houses or a group of houses governed by a mayor.

Law and order is decided by the Sovereign Prince.

It recognizes all UN members except the EU members, it recognizes Taiwan, Kosovo, and all micronations. Its only allies are in the Babikir Entente.

There is a military called the Hosamian Armed Forces.

Climate is just the normal weather in Connecticut and there are 2 houses, a school, a forest, and a backyard.

There is no economy but the Sovereign Prince is planning to tax his people with the Hosamian Dollar.

Hosamian culture is heavily influenced by the Otaku culture with a tad bit of Sudanese culture mixed in, Hosamism, the state religion, also plays a major part in Hosamian culture.

Hosamia has an online newspaper called the Hosamian News Network, other then that there isn't much Hosamian media other then the Sovereign Prince's YouTube channel which has been inactive for months.