The Oskonia Wildrose Party , commonly known as the Wildrose Party or WRP, was a centrist big tent political party in the Empire of Oskonia which advocated for freedom amongst all citizens, equality and progressivism. It was founded on 14 July 2021 by Liam Alexander. Its last chairman was Jayden Dagsa. The Wildrose Party was the final ruling party of Oskonia, as it held 4 out of the 7 seats in the Deputertkammer when the said chamber was dissolved.

The Oskonia Wildrose Party was founded on 14 July 2021 by Chairman and Prime Minister Liam Alexander. Immediately after foundation, he began work on recruiting members, designing promotional material, and drafting a policy book and party charter, all of which were underway and in their early stages. After the vote of no confidence moved by Deputy Chairman Jayden Dagsa, Alexander left the party and was succeeded by Dagsa. Dagsa was responsible for beginning the charter writing process. It was halted, however, due to the Oskonian political crisis, and with the dissolution of the Oskonian Empire, the Wildrose Party ceased to exist as well. 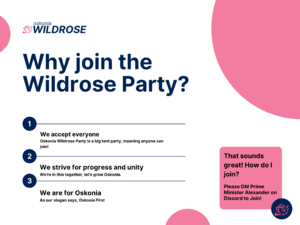 Promotional poster designed by Liam Alexander, with reasons on why to join the party.