From MicroWiki, the free micronational encyclopædia
(Redirected from JISA)
Jump to navigation Jump to search

The Joint International Space Administration (JISA, /ˈdʒisə/) was an intermicronational government agency collectively owned both by Kingdom of Ikonia and the State of Gradonia responsible for the citizens space program, as well as aeronautics and aerospace research. 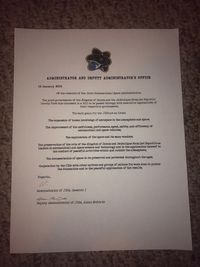 JISA was created in 2019, forming the main first NASA-type organization for micronations. An effort for the JISA was the idea of founding Administrator, Abrams I, after stumbling on MicroWiki pages for micronational space agencies. The JISA was formed along with the help of Aidan McGrath.

The new agency was to have a distinctly civilian orientation, encouraging space exploration and applications in space science. Since its establishment, most Ikonian space exploration efforts were been led by JISA.

The JISA started issuing uniforms, and patches to employees for space flight programs on which they take missions in.

After a major time of inactivity and the company running out of the funds back in 2019, it was collectively decided on 31 May 2020 by both Ikonia and Gradonia to shut down the agency. They also stated the Poseidon misison was shut down due to a failure back in 2019.

JISA conducted one unmanned spaceflight programs during its life.

The Poseidon program is the first unmanned and only program of the JISA, and was set to take its first mission, Poseidon 1, in effect around January or February 2019 but was halted due to Aidan I's resignation.