The Virtual State of Guanabara (Portuguese:Estado Virtual da Guanabara) is a micronation Portuguese-speaking country, headquartered in the city of Rio de Janeiro. It has a population of about 16,700,000 of inhabitants (similar to the pupulation of countries like Holland, Guatemala and Ecuador). A GDP of US$308 billions (similar to Colombia and Pakistan) and GDP per capita of US$18.432 (similar to Greece and Estonia). The HDI is 0,761 (78th largest in the world), behind Mexico and a position ahead of Brazil. Is a member of CFM (Confederação de Futebol Micronacional) and OMENU (Organización de Micro Estados de Naciones Unidas).

The State of Guanabara shares its name with Guanabara Bay, which lies to the east of the state. There are many theories as to the name's origins, including hidden water, lagoon of the sea, and bosom of the sea.

In 1834, the city of Rio de Janeiro was elevated to Imperial capital of the Empire of Brazil, and was included in the Neutral Municipality (Portuguese: Município Neutro). The surrounding Province of Rio de Janeiro (which did not include the city) had its capital city in Niterói. When Brazil became a republic in 1889, the city of Rio de Janeiro remained the national capital, and the territory of the Neutral Municipality became the Federal District (Portuguese: Distrito Federal), while the surrounding homonymous province became a state, still with Niterói as its capital.

Throughout its 15-year existence, Guanabara was a unique state in many ways. Comprising only one city (albeit a large one), Guanabara was the smallest Brazilian state by land. It also had the peculiarity of being the only Brazilian state that was not divided into municipalities. There was no mayor, municipal legislature or any other municipal government institution there, as the city of Rio de Janeiro was directly administered by the state government of Guanabara. On the other hand, that also meant that the Guanabara state government had some functions that were normally assigned to municipalities elsewhere, such as regulating urban zoning, inspecting the safety of buildings, or issuing licenses for commercial venues, for example.

The Government of Guanabara has promoted the creation of the Gender Equality Committee (Portuguese: Comitê para Igualdade de Gênero),[1] on July 26, 2019. The body's role is to promote gender equality and raise awareness of both men and women. The committee is chaired by MP Fabiana Costa, author of the bill to create the body and chairman of the Social Democratic Party.

On July 4, 2019, she was made a member of OMENU. Being this the first organization that is not part of the lusophony, being this organization speaking of Spanish.

Other European ethnic groups, such as Swiss, Finnish and Germans settled mostly in the mountainous areas (Nova Friburgo, Petrópolis, etc.) and in the capital. Italians and Spaniards are also present in the capital as well as in the surrounding cities.[11][12]

People of African descent are numerous, particularly in the metropolitan area of the capital city. Those of mixed-race ancestry (tri-racials, mulatos, and some caboclos and cafuzos) make up the majority of the population in many cities. The city of Itaguaí was considered a Japanese colony in the 20th century, but many of the Asian Cariocas that once lived there moved overseas (most of them to Japan) as well to other Brazilian states like São Paulo. 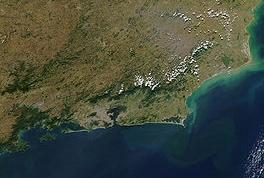 The state is part of the Mata Atlântica biome and is made up of two distinct morphological areas: a coastal plain, known as baixada, and a plateau, which are disposed in parallel fashion from the shoreline on the Atlantic Ocean inland towards Minas Gerais.

The coastline extends 635 kilometers and is formed by the bays of Guanabara, Sepetiba, and Ilha Grande. There are prominent slopes near the ocean, featuring also diverse environments, such as restinga vegetation, bays, lagoons and tropical forests.

Most of the state however consists of highlands, often higher than 1000 m, formed by several mountain chains like the Serra do Mar which separates Rio from the state of São Paulo. The highest point of the state, the Pico das Agulhas Negras (Black Needles Peak) is located in the Serra da Mantiqueira which forms the physical border with neighbouring Minas Gerais.

Its principal rivers are the Guandu, the Piraí, the Paraíba do Sul, the Macaé and the Muriaé. 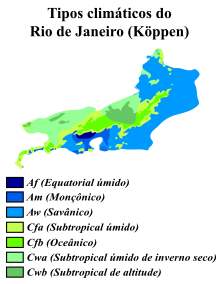 The entire state is located within the tropics (the Tropic of Capricorn is located just a few degrees south of Rio) so a tropical climate is predominant. However, due to altitude, temperatures can drop to freezing point or below in some parts. Frost is not uncommon in some mountainous cities such as Teresópolis, Nova Friburgo and Petrópolis and snow has been reported occasionally in the Itatiaia National Park.

Rains tend to be concentrated in the summer (December to March) with a dry season in the winter (June to September). Most of the state receives between 1,000 and 1,500 millimetres (39 and 59 in) of rainfall in a year.

Tropical forests used to cover more than 90% of the territory of Guanabara; large portions were devastated for urbanization and for plantations (coffee, sugar cane); preserved areas can be found in the steepest parts of the mountain chains.

The state's tropical coast and river areas are the only remaining habitat of the golden lion tamarin.

The biggest company in Guanabara is TAG - Transportes Aéreos Guanabara. 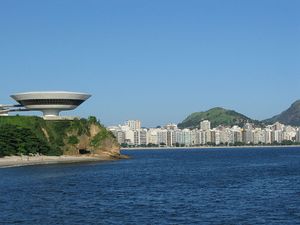 The occasion of the last five days leading up to Lent is annually cause for a great explosion of joy in Rio – a round-the-clock party uniting emotions, creativity, plasticity, colours, sounds and much fantasy. It is the greatest popular party in the world, a unique record of the rich cultural melting pot typical.

In Rio de Janeiro, it is celebrated in various ways, most famously through the elaborate competition of samba schools comprising thousands of dancers in each school, each of which has composed a new "enredo de samba" (samba script) for the year that is released and popularized by the time Carnaval arrives, thus already recognizable for its lyrics, themes, and rhythms by the energized audience in the bleachers thronging to see the all-night competition of one samba school after another until dawn. Each samba school consists of 'alas' (wings) of samba dancers costumed to carry out one aspect of the theme of the song they all sing. This event began in the 1930s as a diversion for what politicians sought to assuage as an otherwise restive populace. It came to be held on the bleacher-lined Marques du Sapucai for decades until a covered sambadrome was built in the 1980s.

In other parts of the city, Carnaval festivities include the Banda de Ipanema, a street parade of transvestite costuming that draws its throngs of revelers to the streets of Ipanema. In the city center on the final night of Carnaval, into the wee hours of Quarta Cinza (Ash Wednesday), a very different flavor of street parade is provided by Quilombo (the word given to slave refugee colonies) with authentic African costuming. For others, Carnaval is a time of clubbing in costume in more exclusive locales in the Zona Sul.

Sports are a very popular pastime in Guanabara. The most popular is football. Football fields and futsal courts are scattered throughout micronation. Volleyball is the second most popular, most practiced among women. Then, Basketball, Handball and Cycling. W:Jogging is very much practiced as well, but not in the competitive aspect.

Sports such as Beach Volleyball, Softball, Football, American Football and Surfing are also practiced on the beaches of 'Guanabara' . Tennis and Golf have had an increase in the number of practitioners, but only in higher social classes.

These are the main communication vehicles present in the Guanabara Virtual State.