The Federated States of Antarctica is a highly-ambitious micronation proposed on the Antarctic continent. It is currently comprised of seven states, a federal district, and also claims a seamount chain in the South Atlantic Ocean for a possible seasteading project. The country claims dozens of small enclaves in optimal ice-free areas throughout the coastal regions of Antarctica. The total formally-claimed land area is 15,017 square miles (slightly larger than Bhutan), despite maps which usually show the country as occupying the entire continent.

A constitution was drafted by founder and Provisional President David Powell on January 25, 2009, modeled almost entirely after the constitution of the State of Alaska, where Powell currently resides. The constitution will be fully active when there is sufficient citizenship to form a complete government. An interim constitution has yet to be drafted, but is planned.

The Federation is intended to be a nation of disenfranchised world citizens with a liberal world view on issues such as environmental conscience, equality, and promoting unity among mankind. The project began in 12004 as the Imperial Realm of Stonewall, which was intended to be a homeland for gays and lesbians around the world. Since then, the vision has grown and now seeks to be a separatist nation for those who subscribe to a variety of liberal and progressive world views. The defeat of a plan for universal health care in the United States by lobbyists and the lawmakers who are financially tied to them has underscored the need for a new country movement that will create a libertarian socialist nation.

The Federated States are to be a republic. A president shall be elected every four years by popular vote and may serve no more than two consecutive terms. The Antarctic Senate shall consist of 100 members: two from each state that represent the entire state at large and the remainder apportioned according to population. The judiciary consists of a Supreme Court and a system of Federal circuit courts. According to the Constitution, all elections are to be non-partisan in nature.

The Federation constitution calls for a federal system, a separation of powers, and a system of checks and balances between the three branches of government. It also includes an extensive Bill of Rights, which guarantees the free exercise of speech, press, assembly, petition, and religion. The Federated States shall officially be an atheist nation, which allows for all religions to exist with neither the blessing nor intervention of the government. Citizens shall also enjoy the right to bear arms, as well as trial rights similar to those in the United States Bill of Rights.

Revenue shall come primarily from sales taxes, gambling revenue, and taxes on marijuana, alcohol, and prostitution. It is expected that its cities will provide goods and services to tourists and researchers. Therefore, its tax base will consist of the entire continent rather than being limited to the enclaves which make up its sovereign territory. The Federated States shall have a universal health care system.

The Antarctic Treaty, established in 1959, is to be adhered to as long as it is in force. The Federated States does not recognize the territorial claims that exist on the continent. Officially, the country shall be made up of seven small enclaves that it claims as its sovereign territory. However, any location south of the 60th parallel that is not currently occupied nor claimed by other nations it recognizes remains a potential site for a new enclave. The official map of the Federated States of Antarctica shows the Antarctic continent divided into seven states, even though the Federated States does not claim territorial sovereignty over the entire continent.

The Federated States shall have the strictest environmental regulations on the planet. Fossil fuels and other non-renewable resources shall be strictly controlled. Antarctica's communities shall be powered by wind and solar power and heated geothermally. All waste shall be recycled. No non-native vegetation or animal species shall be allowed outside of enclosed buildings.

The Federated States shall not have a military, in keeping with the tradition that the continent is not to be used for military purposes. However, each citizen over the age of 18 shall be considered a member of the national militia that has the potential to be transformed into an organized military should the country's security or sovereignty be threatened. 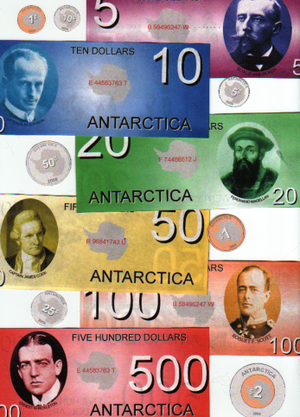 The design of Federation currency.

Like all nations that operate on the Antarctic continent, the Federated States shall assume full jurisdiction of its citizens in all locations south of the 60th parallel. Additionally, it shall have jurisdiction over all of its facilities and personnel outside of established enclaves.

The official currency shall be the Antarctic Dollar ($AAD).

The Federated States will use the Imperial (English customary) system for weights and measures, making it the only country besides the United States to do so.

The first draft of the Federation constitution has been completed. Using the constitution of the U.S. state of Alaska as its basis, it also includes several provisions based on the United States federal constitution as well. Key provisions include:

The Federated States has not yet established any international relations with existing macronations, although it intends to make its territorial claims known to them. Currently, the Federation has established diplomatic ties with other micronations on the Antarctic continent, specifically the Kingdom of Finismund and the Grand Duchy of Flandrensis. The Federation has joined these two countries in opposing and refusing to recognize territorial claims made by the micronation of Westarctica.

The Federated States has discontinued the use of the Gregorian BC/AD year-numbering system in favor of the Holocene-era system, on the grounds that using a calendar epoch based on the birth of Christ is a violation of the separation of church and state.

For purposes of business, government, communications, science, and particularly transportation, the 24-hour time format (e.g. "15:00") is preferred. In the media and in casual conversation, the 12-hour time format (e.g. "three o'clock" or "three in the afternoon") is used instead. Despite this difference, it's generally understood that "18:45" is the same as "quarter to seven". Date notations will follow the standard U.S. format of month-day-year (e.g. "[[1]]", "December 31, 12009").

Main article: States of the Federated States of Antarctica

The Antarctic continent is a rugged and empty land of ice and snow, occasionally interrupted by rock outcroppings. It is in these areas that a majority of the scientific research facilities exist. A dozen or so rock "oases" are the proposed sites of Antarctica's settlements.

The Federation's formal territorial boundaries cover only the land occupied by its settlements, which cover a total area roughly the size of the U.S. state of New Jersey. As there are no large ice-covered areas claimed by the Federation, its claims are intended to be entirely urban environments.

Antarctica's economy is expected to revolve around tourism and services. Gambling, prostitution, and marijuana are to be legal in all parts of the country and therefore expected to account for a considerable portion of the nation's revenue. Ecotourism is expected to be a large part of the economy, as are goods and services provided to existing scientific research facilities.

Antarctica is further envisioned as a country that will attract businesses and industries that would be illegal in most countries, such as drug companies that produce generic pharmaceuticals in violation of patents. This will also create a health care tourism industry for people suffering from diseases such as AIDS, which in many parts of the world, are too expensive to treat.

Antarctica has historically been set aside for the purpose of scientific research. The Federated States will continue in that tradition. Science that is prohibited in most parts of the world, such as research on human cloning, will be legal in Antarctica.

Antarctica, being a new country, has yet to develop a distinct culture. However, people with liberal, socialist, or otherwise progressive leanings are highly encouraged and invited to become citizens.

The Federated States of Antarctica formed the Antarctic Soccer Confederation in protest of the FIFA policy that all nations must enter tournaments on their own continent. It is also known that the FSA citizens prefer to refer to w:Association Football as soccer, and w:Gridiron Football as simply football, reflecting an American influence on their culture.

Currently, the Federated States of Antarctica is an aspirant state. Its grandiose plans and ideas are intended to be a guide for future settlers. It is understood even by current citizens that the physical reality of the Federated States will likely look nothing like what is envisioned by its current founders. The ideals of a free, democratic, socialist society for the 121st Holocene century will always remain, however.