Amundsen (pronounced "a-MUND-zen") is a proposed state belonging to the Federated States of Antarctica. It consists of an enclave on a rock outcropping in the coastal mountain range of Marie Byrd Land. The enclave is the only Federation land claim that does not exist in territory claimed by other nations. Since any unoccupied area south of the 60th parallel is a potential site for future Federation settlements, all potential future enclaves located between 97.5° West and 180° East longitude and north of 82.5° South latitude would be part of the state.

The region in which the State of Amundsen resides is a micronational hot spot due to the fact that Marie Byrd Land is the last piece of land on Earth not claimed by any nation. Westarctica claims the entire region, although this claim is not recognized by any other Antarctic micronation. Other active micronations in the region recognized by the Federated States include the Grand Duchy of Flandrensis, Principality of Arkel, and Marie State.

On December 15, 2009, a rogue nation known as the Republic of West Antarctica made a sector claim in the region that includes the State of Amundsen. The official position of the Federated States is to dismiss this claim as non-legitimate.  The state's Provisional Governor,  Aaron Mantel] has issued a strong statement condemning the claim.

The state's formally-claimed area is in a mountainous region on the northeastern shore of the Ross Sea. While the Federated States does not claim ice-covered land as a rule, the state is over 50% ice-covered. Settlement is limited to the places where the tallest peaks of the Ford Ranges emerge from the West Antarctic Ice Sheet.

Winters can be severe, but summers are fairly mild, often with daily high temperatures around 32 °F. Sometimes, it is warm enough during the summer to venture outside for recreational activities. Occasionally, this is possible in the winter as well. Since the entire state is south of the Antarctic Circle, it receives 24 hours of continuous sunlight in the weeks surrounding the December solstice and 24 hours in which the sun fails to rise in the weeks surrounding the June solstice. The settled region does receive ample daylight year round, however.

Amundsen's government is modeled after the Federal government, with a House of Representatives serving as the legislative body, a Governor serving as the executive, and a system of State courts to serve as the judicial branch. There are 40 members in the House of Representatives, with one for each borough, and the rest to be apportioned according to population Amundsen is declared to be a socialist republic according to its constitution.

Twin Cities International Airport is the main transportation hub of the state, located in Scottsdale.

The coastline is completely covered in ice. Therefore, there is no seaport. Instead, cargo must arrive close to the coast by icebreaker and its cargo unloaded by helicopter.

Transport by land is restricted to the settled areas. It consists almost entirely of monorails and buses fitted with caterpillar tracks.

T-6 and T-7 are the two main ice highways through the region that connect Amundsen with Ellsworth and Hillary, respectively.

Amundsen University is the official Antarctic Treaty research facility in the state. Its primary scientific focus will be climate change and environmental science. 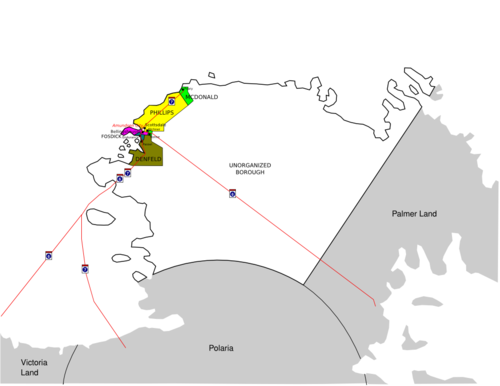 A listing of proposed settlements in Amundsen: