The Duchy of Batavia (Dutch: Hertogdom Batavia, German: Herzogtum Batavia, Latin: Batavorum) is a micronation between the Rivers Rhine and Meuse at the German-Dutch border. It consists of a coherent wooded area that is known as the Ketelwald. The north-western (former Dutch) area is called the Neder-Rijkswald and consists of the Sint Jansberg, Mookerheide, Duivelsberg and Sint Maartensberg. The south-eastern (former German) area is called the Opper-Rijkswald (German: Klever Reichswald).

The Duchy was founded on 8 august 2019 by Duke Otto I of Batavia to protect the ancient Sacred forest of the Batavi against human activities in the area, such as logging. It is forbidden to live in the Duchy, although parts of the territory are occupied by Dutch-German settlers and firms.

The Duchy of Batavia is named after the Batavi, an ancient Germanic tribe that lived around the modern Dutch Rhine delta in the area that the Romans called Batavia. The name is also applied to several military units employed by the Romans that were originally raised among the Batavi. The tribal name, probably a derivation from batawjō ("good island", from Germanic bat- "good, excellent," which is also in the English "better," and awjō "island, land near water"), refers to the region's fertility.

The current Ketelwald was once the Sacred Forrest of the the Batavi. The roman historian Tacitus mentions the Sacrum nemus Batavorum.

Revolt of the Batavi

The Revolt of the Batavi took place in the Roman province of Germania Inferior between AD 69 and 70. It was an uprising against the Roman Empire started by the Batavi, a small but militarily powerful Germanic tribe that inhabited Batavia, on the Rhine–Meuse–Scheldt delta|delta of the river Rhine. They were soon joined by the Celtic tribes from Gallia Belgica and some Germanic tribes.

Under the leadership of their hereditary prince Gaius Julius Civilis, an auxiliary officer in the Imperial Roman army, the Batavi and their allies managed to inflict a series of humiliating defeats on the Roman army, including the destruction of two legions. After these initial successes, a massive Roman army led by the Roman general Quintus Petillius Cerialis eventually defeated the rebels. Following peace talks, the Batavi submitted again to Roman rule, but were forced to accept humiliating terms and a legion stationed permanently on their territory, at Noviomagus (modern day Nijmegen, The Netherlands).

Otto III, Holy Roman Emperor, was born in June or July 980 somewhere between Aachen and Nijmegen in the Ketelwald near the German town of Kessel. The only son of Emperor Otto II and his wife princess Theophanu, Otto III was the youngest of the couple's four children. Immediately prior to Otto III's birth, his father had completed military campaigns in France against King Lothar. The capital of Batavia, Ottonia, is named after Otto III and is located at the exact spot of his birth.

From the Middle Ages until the 19th century the Ketelwald was devided by the Duchy of Guelders (today part of the Kingdom of the Netherlands) and the Duchy of Cleves (Today part of Germany). The dukes used to hunt in the forest and towns arouse in the area.

In the Battle of Mookerheide, Spanish forces defeated Dutch forces composed of German mercenaries on 14 April 1574 during the Eighty Years' War near the village Mook and the river Meuse not far from Nijmegen in Gelderland. Two leaders of the Dutch forces, brothers of William the Silent, were killed: Louis of Nassau (born 1538) and Henry of Nassau-Dillenburg (born 1550).

In the 19th century the area was popular with Romantic landscape painters. Dutch painter Barend Cornelis Koekkoek for example. The flat Dutch countryside could not satisfy Koekkoek’s romantic soul for very long. ‘Surely’, Koekkoek wrote in 1841 ‘Our fatherland boasts no rocks, waterfalls, high mountains or romantic valleys. Proud, sublime nature is not to be found in our land’. With that in mind, in the summer of 1834 he moved to the old Ducal capital of Cleves, Germany, where he found his ideal subject matter in the region of the Ahr, Ruhr and Rhine. Soon large oak trees, winding paths and panoramic views filled his paintings with an artful blend of minute detail and atmospheric mood. In Cleves, where he would spend the rest of his life, Koekkoek painted his most important landscapes, ranging from extensive river valleys to idyllic forest views dominated by one or more oaks. He often dramatized his trees as a means to emphasize man’s paltriness in comparison to nature.

In the Second World War, Klever Reichswald was the location of the Battle of the Reichswald, also known as Operation Veritable, in February and March 1945. In this protracted battle against British and Canadian troops on Germany's Western Front, German lines under the capable General Alfred Schlemm (of the Luftwaffe) had been reequipped. The Siegfried Line was the most fortified in this area, and the troops were re-enforced by elite and experienced soldiers well prepared for protracted fighting.

The terrain largely nullified the Anglo-Canadians' advantages in equipment, armament and munitions, and manpower. On the German side, over 90,000 men fought in this battle, and 52,000 were taken prisoner.

In 2017 the German local goverment announced that it wants to build wind turbines inside the forest. Inhabitants of the surrounding area were very concerned by the possible noice pollution and the damage to the forrest. Despite many protests the German goverment has continued it's plans and has currently build a few wind turbines.

In 2019 the Dutch goverment annouced that it wants to use a large part of the municipality of Gennep as a floding area in case of extreme high tide. This area is inhabited by Dutch and very close to the Ketelwald.

These recent developments, together with the fact that various firms keep logging the wood of the forrest, have moved Duke Otto I of Batavia to claim the indipendece of the area in a statement on the internet. 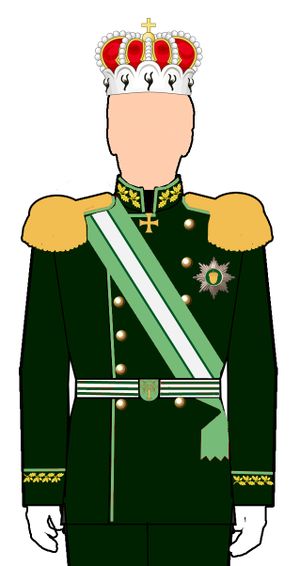 Schematic image of the regalia of the Duke.

The Duchy of Batavia is a unitary feudal absolute monarchy ruled by a Duke. There is no democracy, although a council of wise men called the Forrest Council (Waldraad) gives council to the duke.

The most important laws are the following:

These laws are largely ignored by people however and currently the Duke has no means to enforce his laws. Firms and local goverments of the Netherlands and Germany claim ownership of the area and violate the laws on a regular basis.

Recognised goverments in exile, no relations

As the Reichswald is on a glacial ridge, it is not subjected to flooding. The glacial gravel contains much loam from the northern German plain and this makes the surface extremely muddy when using the unmetalled roads during a rainy period.

The Reichswald is on the ridge of the lower Rhine, which was created by glaciers. In the Ice Age a range of hills were created, which contrasts the flat Rhine plain. 31 of the hills reach heights above 50 meters. One of the highest hills is the Rupenberg with 95 meters, located at the eastern end of the Reichswad.

The forest is a closed mixed deciduous forest dominated by copper beech. For some areas the oak is predominant; for some other parts conifer forest is dominant.

In the west the Reichswald merges into woodland of the province Gelderland in the Netherlands. These are almost closed over the municipalities of Milsbeek, Mook en Middelaar, Berg en Dal and Heumen to Nijmegen.

Except small subareas the complete Reichswald is under landscape and nature protection. The majority is in areas of outstanding natural beauty: at AONB Waldgebiet Reichswald (ca. 3875 ha, in Kleve, Kranenburg and Goch), at AONB Reichswald (ca. 166 ha, in Bedburg-Hau) and at AONB Pfalzdorfer Höhenrand and Nierstal (only subareas at Reichswald, in Goch). The northern forest areas near the core of Kleve could be counted to the Reichswald as well. They are at AONB Standortübungsplatz einschließlich der Umgebung westlich Kleve (ca. 126 ha) and at AONB Waldgebiet des Tiergartenwaldes (ca. 295 ha).

In the northwest area of the Reichswald the protected areas 'Quellen am Stoppelberg' is (ca. 2,9 ha, in Kleve) and in the middle of the forest the protected area ‘Geldernberg’ (ca. 580 ha, in Kleve, Kranenburg and Goch). ‘Geldernberg’ is known as the core area of the Reichswald and is stated as the FFH-Area DE-4202-302 Reichswald, which puts it in the European network of protected areas Natura 2000. The AONB Geldenberg is of particular importance because it is the largest, largely closed, predominant hardwood old-growth forest in the Reichswald and is home to endangered species like the golden oriole, black woodpecker, honey buzzard and stag beetle. 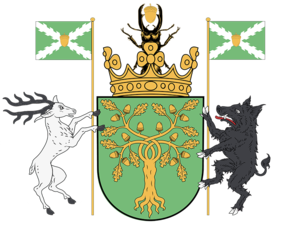 The coat of arms.

The Duchy of Batavia is a Roman-Catholic nation. Saint Francis of Assisi is the patron saint and has served as inspiration for the modern Batavi.

The coat of arms of Batavia is a golden Oak tree on a shield of green. Supported by a white stag and a black boar and crowned with a crown featuring a stag beatle holding an acorn. All these symbols refer to the nature of the forest.

The flag of Batavia is green with a white cross of Burgundy (saltire) and an acorn. The cross of Burgundy was a symbol for the Burgundian Netherlands ruled by House Valois and House Habsburg. The acorn is the same as on the coat of arms.